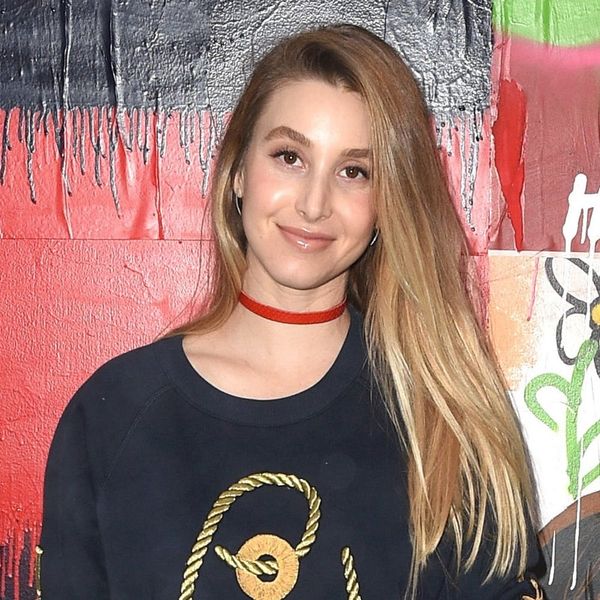 Several weeks after her The Hills castmate, Lauren Conrad, was treated to a poolside baby shower, Whitney Port is thanking friends for her own, which took place last Friday night. The mama-to-be shared several snaps from the event held on the rooftop of SIXTY Beverly Hills looking happy as could be.

“BEST baby shower ever!” the 32-year-old wrote before launching into some of the details that made the day so special. “We got to hang out with all of our friends (which was awesome, ‘cause I’ve been super anti-social lately, sorry guys!!!)…snack on @puregrowthorganic goodies, @coolhaus ice cream sandies, burgers, and hot doggies, all while soaking in all the <3. What more could a pregnant lady ask for?”

BEST baby shower ever!!! Last Friday night, my sisters @bkevents @jadeportrobbins @paigemport and @mamavicksie threw Timmy and I the most perfect pool party BBQ to celebrate #babyrosenman. We got to hang out with all of our friends (which was awesome cause I've been super antisocial lately, sorry guys!!) on the rooftop @abovesixtybh, snack on @puregrowthorganic goodies, @coolhaus ice cream sandy's, hot doggies and burgers all while soaking in all the ❤️. What more could a pregnant lady ask for?? 👊🏻 @amazon for hooking our 👶🏼 up with all it needs too! #amazonbabyregistry 📷: @jensimonphoto

Well, “funky” tropical floral arrangements, for one thing: As Port told People, her sister, Ashley, “went to the flower mart on [the day before] and did all the arrangements herself with my style and aesthetic in mind,” she revealed. “There were all very different colors and there were birds of paradise and orchids, and a lot of different greenery. It was very funky, like desert flowers,” she said.

One thing it WASN’T was overtly pink or blue — Port and husband Tim Rosenman are waiting to find out their baby’s sex. Not that it’d be any different had she found out. “I’m kind of the person where, even if we did know the gender, I wouldn’t go all blue or all pink,” she said. “I’m just not that kind of mom…We’re just staying away from anything too gender-specific and leaning toward creams and nudes and little hints of grays and yellows and things.”

Boy, am I growing! In every direction! At first, I must be honest, I had a very hard time coming to terms with my changing body. I had always prided myself on being healthy from the inside out and it was difficult not labeling my pregnant body "fat". But as time has gone on, I have come to appreciate what my body is ACTUALLY doing. Don't get me wrong, I still look at myself in the mirror every day in disbelief about the fact that my boobs are now triple d's or that when I look down, I can't see my feet, etc., but I remind myself I'm growing a gift and this gift needs room to grow. Just as we all do. Happy Thursday everyone! 👗: @elizandjames 👠: @laurencedacadeparis Ring & earrings: @sophiemonet 📷: @jensimonphoto

When it comes to the fashion designer herself, however, she’s more open to pinks — she wore a fuchsia and green floral kimono Elizabeth and James frock for the occasion, along with a pair of Laurence Decade white leather booties and some Sophia Monet jewelry.

She also made an honest confession about her changing body in the frock, telling followers that she initially had a very hard time not seeing herself as “fat,” but that she’s come to “appreciate what my body is ACTUALLY doing. Don’t get me wrong, I still look in the mirror every day in disbelief that I have triple D’s or that when I look down, I can’t see my feet, etc., but I remind myself that I’m growing a gift and this gift needs to grow. Just as we all do.”

What do yo think of Whitney’s festivities? Tell us over @BritandCo.

Nicole Briese
Nicole is the weekend editor for Brit + Co who loves bringing you all the latest buzz. When she's not busy typing away into the wee hours, you can usually find her canoodling with her fur babies, rooting around in a bookstore, or rocking out at a concert of some sort (Guns N' Roses forever!). Check out all her latest musings and past work at nicolebjean.com.
Baby Shower
Celebrity News
Baby Shower Celebrity Baby
More From Celebrity News