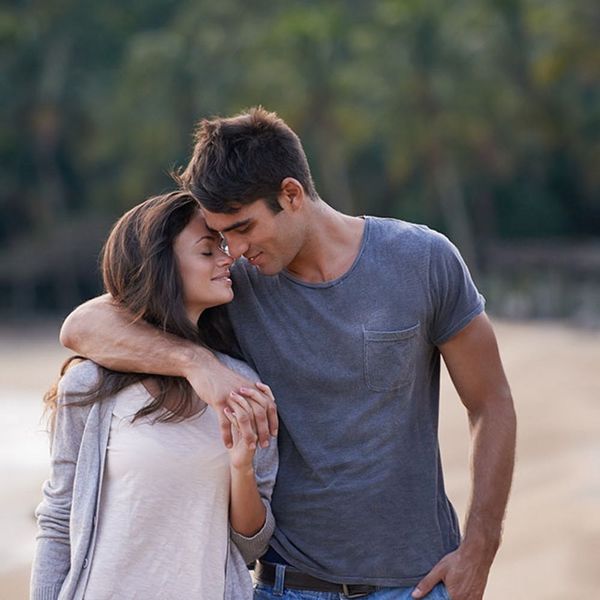 If you take your cues about love and relationships from books, TV, and movies, you probably believe that women tend to be more romantic than men. Pop culture typically paints a picture of guys who are resistant to commitment, wait until the last possible moment to make a big gesture of love to a potential S.O., and scoff at the fairy tale ideal. As a result, many of us don’t give dudes a lot of credit in the romance department. According to data from dating giant Match, though, we might be selling men short.

Per the results of Match’s 2018 Singles in America survey which looked at responses from 5,000 singles across the US, single men have been in love an average of four times, while single women have been in love an average of three times. Men are also slightly more likely than women to say that they’ve imagined a future together on a first date (51 percent of men copped to this, compared to 49 percent of women). And if a BFFs-turned-life-partners plotline is one of your favorite rom-com tropes, you may also be interested to know that 33 percent of men say that a friends with benefits relationship has turned into a long-term committed relationship for them IRL. Just 23 percent of the women surveyed say the same.

According to Laurel House, dating empowerment coach and Match dating expert, much of our widespread misunderstanding about romance across gender lines is rooted in the way we think about — wait for it — multitasking.

“When someone is distracted, romance tends to be ignored,” House tells us. “Because women are known and shown as better multitaskers, we are naturally more capable of injecting romantic thoughts into the middle of an otherwise work-oriented day. That being said, when men do decide to merge their heads and hearts to think about something romantic to do for their love, it can be extremely thoughtful, detailed, and unique.”

These misperceptions about men can do more than simply cause us to make an incorrect prediction about the end of a chick flick. They can also set us up for unfair assumptions about potential partners and significant others, which can have big consequences in relationships.

“Often, what we assume and expect comes true,” House says. “If you go into the relationship expecting that you are going to be the romantic one, you might just be setting the tone and expectation.”

If you are dating a man whom you don’t expect to be romantic but are craving that romance anyway, you’ll probably take the reins with candlelit dinners and midday sexy texts. In doing so, you may rob him of the opportunity to show his own romantic side. Assuming romance is important to both of you, you need to create space for both of you to show up that way so you can minimize disappointment and maximize the good, loving vibes.

“Be the example of your expectations,” House suggests. “Do things that put him in a romantic mood, and he will then start thinking about how he can reciprocate.”

If the Singles in America survey is any indication, the problem isn’t that men are incapable of romance. Creating a spark might be as simple as letting your guy know that he’s free to make those gestures as often as he wants. Because — let’s be honest — it would be pretty great if he did.

What is your favorite way to be romantic? Tweet us @BritandCo!

Alli Hoff Kosik
Alli Hoff Kosik is a freelance writer who is passionate about reading, running, rainbow sprinkles, her lipstick collection, watching embarrassing reality TV, and drinking pink wine. She lives in Brooklyn with her husband and (in her dreams, at least) three golden retriever puppies. Listen to her talk books on The SSR Podcast.
Dating
Relationships
Dating Love Relationship Advice