Whoa: You Can Fly on a Hello Kitty-Themed Airplane 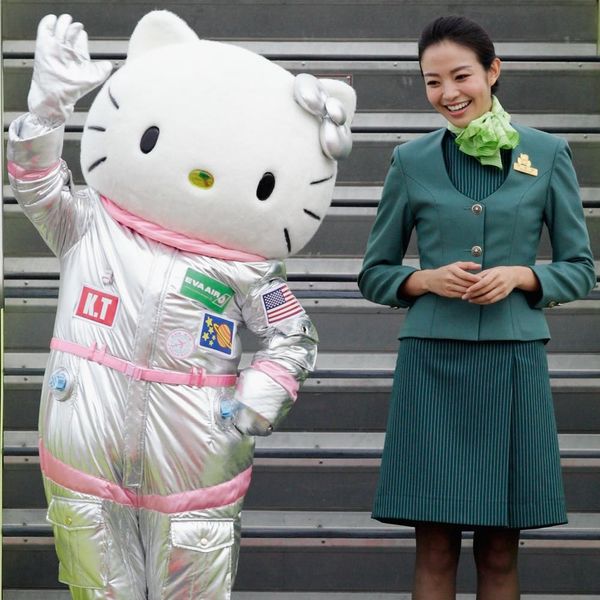 Brace yourself for cuteness overload: Hello Kitty is taking over the world. The beloved cartoon has already popped up in cafés in Seoul, South Korea, and California, and its about to get even bigger. Earlier this week, we were squealing with delight over the adorbs Hello Kitty grocery store launching in Hong Kong, and it appears that the famous cat (or cartoon girl for hardcore fans) has also found another arena to conquer, as well: the friendly skies. Yup, we’ve just discovered that Taiwan’s EVA Air is offering flights on a custom Hello Kitty jet plane.

As Bust recently reported, the airline company has gone all out on this project, teaming up with parent company Sanrio for an officially licensed Hello Kitty experience like none other. EVA left no potential Hello Kitty stone unturned, ensuring that even the tiniest of details aboard the flight fit its cartoon theme. From the cushions to the meal offerings (which include rice and dessert shaped into Hello Kitty form), utensils, hand soap and lotion, luggage tags, and even toilet paper, everything has been customized on this plane: Even the little napkins and coasters have been monogrammed! *swoons*

Travel blogger Ben Schlappig recently had the chance to experience the magic firsthand and, lucky for us, he snapped some rather envy-inducing shots along the way.

The fun continues after takeoff on the EVA Air Hello Kitty jet. After a couple more drinks it'll be time for a catnap. 🐱

Even the toilet paper on EVA Air is Hello Kitty themed (as it should be)! 🙊

…and yes, even… this. Hello Kitty toilet paper.

Now, for the million-dollar question: How can you hop on board? EVA Air’s Hello Kitty flights originate from Taipei and fly to various destinations around Asia, including Hong Kong, Seoul, and Tokyo. There is also service to Paris and, yes, they do also fly stateside, stopping in Houston. Excuse us — we have to book a ticket to Texas. You can do the same here.

Do you want to catch a flight on the Hello Kitty jet? Tweet us @BritandCo.