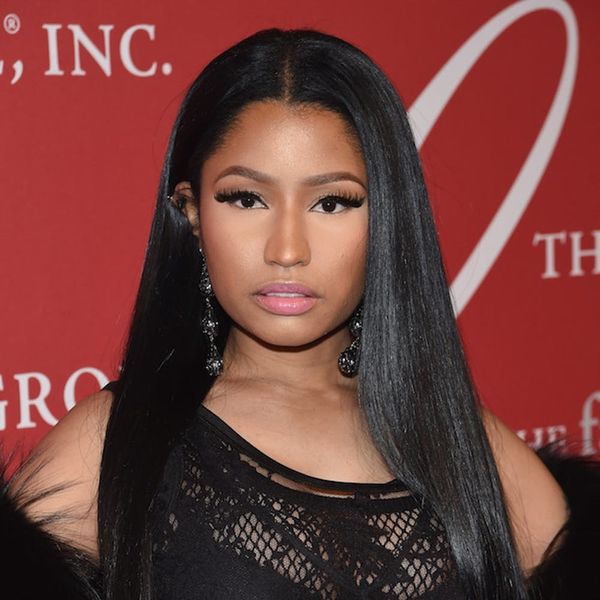 Celebrity feuds are something that most of us can’t help but love (or love to hate). While 2016 had its fair share of high-profile Hollywood drama, 2017 has more or less been scuffle free so far (unless you’re counting the President of the United States vs. Meryl Streep, of course). But over the past week, the internet has been waiting (im)patiently for Nicki Minaj to respond to some pretty harsh words fired at her by rapper Remy Ma, in what could end up being one of the biggest beefs of the year.

In late February, Remy Ma sampled Nas’ classic Jay Z diss track “Ether” to release her own scathing shot at Nicki Minaj called “ShETHER.” In it, she not only drags Taylor Swift and Miley Cyrus into the mix, but also takes aim at Minaj’s recent breakup with Meek Mill, accuses her of using ghostwriters, digs into Minaj’s family matters, and, um, talks a lot about her butt.

“ShETHER” itself is a response to a verse on Minaj’s new song with Gucci Mane called “Make Love,” which many interpreted to be a diss on Remy Ma. You might not even have noticed it if you weren’t already familiar with Remy Ma, or with the decade-old beef between the two rappers, which has ebbed and flowed as Minaj’s career took off and Remy Ma spent time in jail and out of the spotlight after first feuding in 2007.

In a now-deleted Instagram that was posted shortly after “ShETHER”‘s release, Nicki made fun of Remy Ma and Fat Joe’s disappointing Plato O Plomo album sales, and in another, she posted a clip of Beyoncé calling her the rap queen, but that’s all we’ve heard from her so far. But while Nicki is too busy hanging out with Alicia Keys at Paris Fashion Week to respond, Remy Ma went and doubled down on the diss tracks, releasing another one called, erm, well, “Another One.”

In “Another One,” which you can listen to here, the jabs are less personal (although the intimate old photo of Minaj that Remy shared and deleted was VERY personal) — she mostly wants to know where Nicki’s response is. At times it sorta resemble’s Drake’s “Back to Back,” which was the second Meek Mill diss track he put out when the first one didn’t get a response from Minaj’s ex. Remy Ma also appeared on The Wendy Williams Show dressed for a funeral and claiming that Minaj has been sabotaging her career by making fun of her album sales and “trying to keep me off red carpets.” She closes by saying, “But, my grandmother told me to never speak ill of the dead.” The crowd went nuts.

Minaj herself isn’t exactly known for avoiding feuds, like the above-mentioned spats with Taylor Swift and Miley Cyrus, or when she called out shoe designer Giuseppe Zanotti earlier this year. And you don’t need to be too deeply familiar with Minaj’s work to know that she’s well-versed in disses; her discography is stacked with one-liners proving she’s one of the funniest and most ferocious rappers, and we can only assume — and hope — that a response is coming any day now. Based on how next-level Remy Ma is being though, it’ll take someone as skilled as Minaj to do a rebuttal justice. Or maybe, just maybe, the two hip hop goddesses will find a way to get over their differences and hug it out.

Do you think Nicki should release a response to Remy Ma? Let us know @BritandCo.