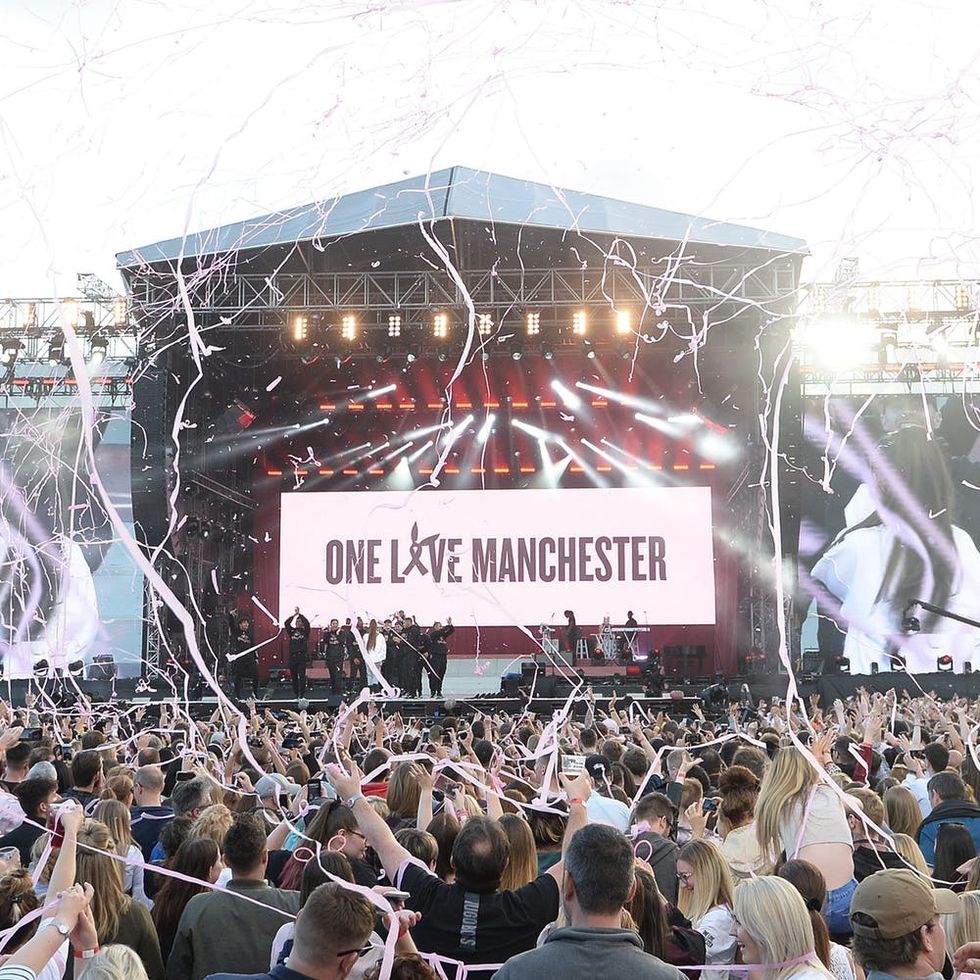 In case you haven’t been tuning in, the Manchester “One Love” Benefit Concert is just wrapping up (stream it here), with organizer Ariana Grande herself returning to the stage after a terror attack ended her last show in the very same city less than two weeks ago.

50,000 were reportedly in attendance for the event, which included many other big names in music such as Miley Cyrus, Katy Perry, Niall Horan, Liam Gallagher, Justin Bieber, the Black Eyed Peas, and more, and they were in for a treat as artists collaborated with one another (Grande joined both Cyrus and the Peas onstage for duets as Cyrus and Pharrell Williams broke it down to “Happy”) and belted out acoustic versions of their favorites (Perry crooned a powerful, slowed-down version of “Part of Me,” singing, “Throw your sticks and your stones, throw your bombs and your blows, but you’re not gonna break my soul”).

It’s been a powerful, emotional, uplifting ride so far, and it’s still going strong: Just take a peek at some of the moments that had us in happy tears of triumph and joy.

1. An Insane Crowd: The crowd was 50,000 strong for Grande and her fellow musicians, and the aerial shots alone were enough to make us draw in our breath.

So much talent and love in one pic! #OneLoveManchesterpic.twitter.com/vkxlkdEqTx

2. Girl Power: Grande and Cyrus joined forces to prove that women together are more powerful than hate could ever be.

3. A Choir of Voices: In perhaps the most emotional moment of all, the Parrs Wood High School Choir was in for a surprise when Grande joined them onstage to help them through a tear-filled rendition of “My Everything.”

Crowd at #OneLoveManchester concert falls silent to remember the victims of the Manchester and London terror attacks pic.twitter.com/CNBwkMDHoU

4. Moment of Silence: Mumford & Sons kicked things off with a moment of silence for the victims of the Manchester and London terror attacks.

5. Hugging It Out: Miley and Ariana shared a much-needed and genuine hug that had us (and everyone else) wiping our eyes.

put your hands up for all those who lost their lives and say " I love you " – Justin Bieber pic.twitter.com/zrbyTIgGWQ

7. Onstage Kisses: Grande’s man Mac Miller, who’s been more than supportive of his lady since the incident, also joined her onstage for a heartwarming smooch.

Ariana Grande's mum is strolling through the crowd telling fans: "do not be afraid" #onelovemanchesterpic.twitter.com/v09Y3VXdql

8. Mom Knows Best: Grande’s mom was on hand among the fans, doling out hugs and telling them not to be afraid.

This police man dancing with people is the best image ever. #OneLoveManchesterpic.twitter.com/UccpdKbXYD

10. Coldplay Covers Oasis: “You’ve done so much singing for us, we wanted to do some singing for you,” Chris Martin told Grande as he thanked her for being strong. He then launched into a rendition of Oasis’s “Don’t Look Back in Anger” — which, as you may recall, became the city’s unofficial anthem when a crowd spontaneously broke out singing it following the attack — in a moment that nearly broke us.

I'M SO HAPPY BC SHE IS SMILING WHOLE TIME @ArianaGrande#OneLoveManchesterpic.twitter.com/nTfUhAa78V

11. Grande Smiles: Though there were plenty of special moments to behold, many felt that simply seeing Grande smile again was the sweetest moment of all.

Catch all the action in a one-hour special on ABC following the NBA finals.

What was your favorite moment from the concert? Tell us over @BritandCo.

Nicole Briese
Nicole is the weekend editor for Brit + Co who loves bringing you all the latest buzz. When she's not busy typing away into the wee hours, you can usually find her canoodling with her fur babies, rooting around in a bookstore, or rocking out at a concert of some sort (Guns N' Roses forever!). Check out all her latest musings and past work at nicolebjean.com.
Music
Current Events
Music