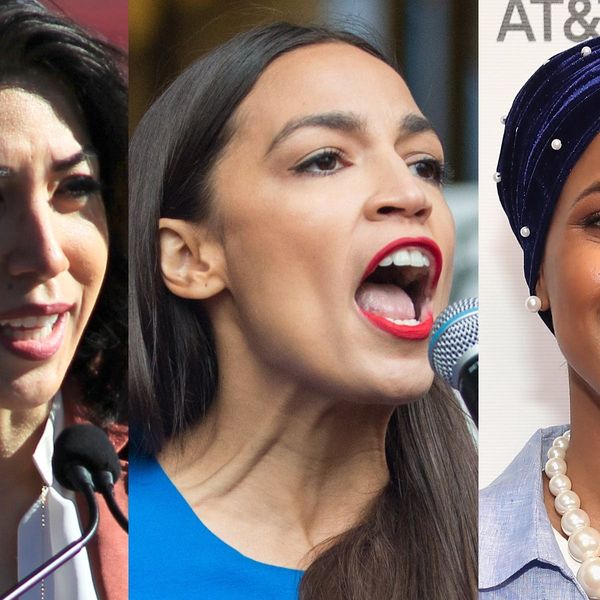 There have been fewer than 300 women elected to the House of Representatives since Jeanette Rankin became the first in 1916; in nearly 230 years, only 52 women have been elected as US senators. Women comprise less than half of their state legislatures in all of the 50 states of the union and less than 35 percent of state legislatures in all but six. It's safe to say that strides toward gender and racial equality in the nation's politics have been slow, and far between.

But, with the 2018 midterms, we’ll be seeing more groundbreaking women who could totally change the game. Among these are candidates poised to become the youngest members of the House, the first transgender congressperson and governor, and even the US’ first Black woman governor.

Here are nine candidates whose wins could make history.

She’s inspired people not just in her New York district, but around the country. "Women like me aren't supposed to run for office,” she said in her campaign video. “I wasn't born to a wealthy or powerful family. But we have to ask ourselves... who has New York been changing for?" (Photo by Scott Eisen/Getty Images)

Stacey Abrams: Stacey Abrams may make history in two ways if she wins her run for Governor in Georgia this year. She’ll not only be the first-ever Black woman governor in US history, but she’ll also be the first woman elected to the position in the state.

In her primary victory speech, Abrams said she was inspired to run in order to make Georgia better for everyone, especially Georgians who felt they didn’t have a voice. "I'm running because I want every Georgia family to have the freedom and the opportunity to thrive,” she said. “You deserve nothing less, and I know Georgia can deliver a whole lot more." (Photo by Paras Griffin/Getty Images for Essence)

Paulette Jordan: Idaho gubernatorial candidate Paulette Jordan has a tough road ahead, but also an exciting one. Though she’s campaigning in a strong Republican state, the Democrat and member of the Skitswish Nation (Coeur d’Alene) could become the first woman governor of the state, and the first Native American governor in American history.

“I think it’s great, and I’m really excited that we are breaking a lot of barriers from age and race to gender, but it’s not the goal,” Jordan told The Independent in June. “The goal is to bring back real representation – whether a man or woman – bringing back leadership to the people that they can be confident and believe in.” (Photo by Sam Morris/Getty Images)

Omar is a refugee who came to the US in 1995 with her family, and often cites her time in refugee camps when talking about her desire to enter politics.

“In my last race, I talked about what my win would have meant for that eight-year-old girl in that refugee camp,” she said at a rally after her primary win. “And today, today, I still think about her and I think about the kind of hope and optimism all of those eight-year-olds around the country and around the world get from seeing your beautiful faces elect and believe in someone like me.” (Photo by Astrid Stawiarz/Getty Images for Tribeca Film Festival)

In August, Hallquist told The Guardian that her campaign was not as difficult as people may expect. “I tell people this isn’t the hardest thing I ever did,” she explained. “In fact, I think after transitioning everything else looks pretty easy.” (Photo by Hillary Swift/Getty Images)

Although Haaland doesn’t want people to focus on her heritage, she does hope more women get involved in politics. “The best way for young women to get started is just by volunteering,” Haaland told us in August. “That’s what I did. I started as a phone banker, now I’m running for Congress. I think that more young women should get involved in campaigns, volunteer for campaigns — not just political campaigns, but maybe issue campaigns, things that they truly believe in.” (Photo by Mark Ralston/Getty Images)