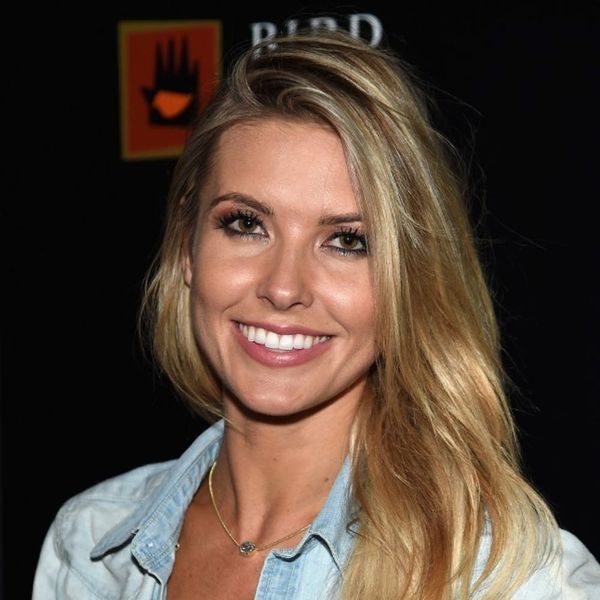 Audrina Patridge has come a long way since she made her way into our homes (Team Audrina forever!) via MTV’s smash hit The Hills 10 years ago, as Lauren Conrad and Heidi Montag’s super cool new neighbor/gal pal. Giving the show a much needed edge (she was, after all, the only brunette in a sea of sun-kissed blondes), we watched as Audrina jaunted off to music events, rode around on motorcycles and was an all-around badass. These days, she’s switching up her M.O. jussssst a bit: For starters? Audrina Patridge is pregnant – and engaged! – to longtime sweetheart and BMX rider Corey Bonham (eat your heart out, Justin Bobby). She’s also busy growing her fashion, beauty and lifestyle blog The Inside Out – in between wedding planning on Pinterest.

While the motorcycle riding and brunette days of yore (Audrina’s hair has gone through some changes too) were surely fun, it’s her newest and realest roles of mom-and-wife-to-be that she’s most excited for. And we got the scoop from Audrina herself on all things baby, from maternity fashion tips and pregnancy cravings to former castmate tips (yes, they still keep in touch!).

“I can’t wait to have a mini version of [me and Corey]!,” she gushes. “We’re so excited to watch our baby learn, grow, laugh and explore.”

Growing, it is: Audrina debuted her baby bump on Instagram just last week, giving us all a major case of hot mom envy. “I am just starting to check out maternity wear,” she shares. “I have been wearing a lot of flowy dresses and boho tops. None of my pants fit me, so I’m wearing black leggings much of the time and accessorizing.” As for keeping her bump itself beautiful, Audrina tells us she’s “been using Mama Mio on my tummy to prevent stretch marks, as well as lots of coconut oil.”

But it’s not all about the aesthetics, as Audrina points out. “I’ve switched to more natural products, and am especially careful about any product I use on my skin because it now affects the baby too.”

That’s not to say she’s immune to pregnancy cravings. Her Achilles’ heel? Sweets. “I crave sweets a lot, which is very unlike me,” she says. “I’ve been craving fruit, chocolate milk and of course Girl Scout cookies! I can’t stand ginger or pork.”

A newly discovered love of cookies aside (our money’s on the Thin Mints), Audrina is well-prepared for motherhood. Though the yet-to-be-determined boy or girl (Audrina says she and Corey have no ideas on baby names yet, but are open to suggestions), is the first child for the couple, she’s not exactly a baby rookie – sister Casey has two children, Sadie and Draven, that Audrina has always had a close bond with. “I’ve always had a very strong maternal instinct,” she tells us. “I have been a very big part of my niece and nephew’s [lives from] the very beginning. [They] have amazed me in so many ways and I’m such a proud and blessed auntie.”

She’s also got plenty of aid in the form of friends and family when it comes to the mommy game. “My sister Casey is the best mom and has done a fantastic job raising two intelligent, beautiful humans. I know she’ll be a great help for me,” she says. Also offering helpful parenting tips? Former Hills castmate and mom Kristin Cavalleri, who now has three of her own (with NFL Chicago Bears QB Jay Cutler) to speak of. “Kristin and I talk often, so I shared the exciting news with her right away,” Audrina says. “[Kristin’s] been great with mommy tips! We’ve discussed the awkward belly stage and how fast babies grow and change in even just a few days. I’ll definitely be asking her for advice as my belly keeps growing.”

But don’t expect to see a spin-off starring the old friends’ broods anytime soon. When asked if she’d allow her child to follow in her footsteps as a reality star in the future, Audrina shut the notion down with a simple “no,” though she did say she’d allow them to watch her former show – “at an appropriate age, if interested.”

After all, it’s Audrina’s future, not her past, that she’s interested in. “Babies and children truly amaze me,” she imparts. “I feel that you learn a lot from them as they grow up and experience life. Their innocence brings a whole new perspective to life and allow you to appreciate what [it’s] all about.”

Are you a mom-to-be as well? Tell us about your experience at @britandco!

Nicole Briese
Nicole is the weekend editor for Brit + Co who loves bringing you all the latest buzz. When she's not busy typing away into the wee hours, you can usually find her canoodling with her fur babies, rooting around in a bookstore, or rocking out at a concert of some sort (Guns N' Roses forever!). Check out all her latest musings and past work at nicolebjean.com.
Celebrity Baby
Celebrity News
Celebrity Baby Pregnancy Style Advice
More From Celebrity News