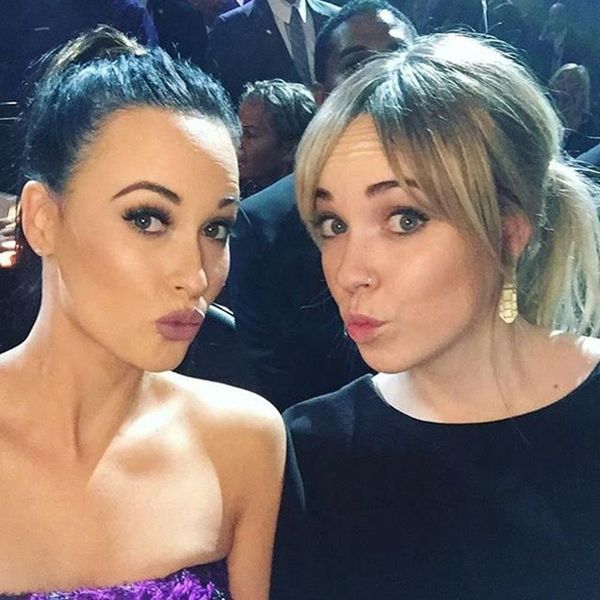 The 2016 Grammys have come and gone, but not without its fair share of memorable moments. Whether you loved it or hated it, (we camped with the former!) Gaga delivered a tribute to late rock legend David Bowie that won’t soon be forgotten; major red carpet moments were had and haircut trends (mullet, anyone?) revived. Now, check out the goods you didn’t get to see with these backstage Insta snaps straight from stars who experienced the night in real time.

Justin Bieber: The adorable big brother love continues as the Biebs lays another smooch on what has to be the most adorable grammy date of the night: his little bro. Awwww! (via @justinbieber)

Carrie Underwood: The country crooner preps for her stage time with Sam Hunt by giving a shout-out to makeup sponsor, Almay. (via @carrieunderwood)

Kacey Musgraves: Keeping with the sibling Grammy’s date theme of the night, Kacey and her sister pucker up for the camera, captioning her photo “My date was better than your date. Little sisters rule!” (via @spaceykacey)

Lady Gaga and LL Cool J: Even Grammy host LL looks a little bit (Ziggy)starstruck as he sidles up to the woman of the evening, Miss Lady Gaga. (via @llcoolj)

The Weeknd and Adele: “You sold HOW many copies of 25?” Based on this photo, we imagine The Weeknd’s convo with Adele went a little something like this. (Photo by Lester Cohen/WireImage via @thegrammys)

Bruno Mars and Ed Sheeran: Looks like Ed Sheeran and Bruno Mars are about to get crunk – guess it’s after party time? (via @brunomars)

Uptown Funk Crew: Mark Ronson and company celebrated their record of the year Grammy win with this shocked selfie. Why so surprised, guys? Uptown Funk was a shoe-in! (via @iammarkronson)

Lady Gaga: If there’s one photo we’d choose to sum up the evening, it has to be this stellar shot of Gaga in all her Bowie glory – we think she did him proud. (via @staplescenterla)

What Grammy’s pics did you like best? Let us know at @britandco!

Nicole Briese
Nicole is the weekend editor for Brit + Co who loves bringing you all the latest buzz. When she's not busy typing away into the wee hours, you can usually find her canoodling with her fur babies, rooting around in a bookstore, or rocking out at a concert of some sort (Guns N' Roses forever!). Check out all her latest musings and past work at nicolebjean.com.
Grammy Awards
Celebrity News
Grammy Awards Instagram Roundup
More From Celebrity News