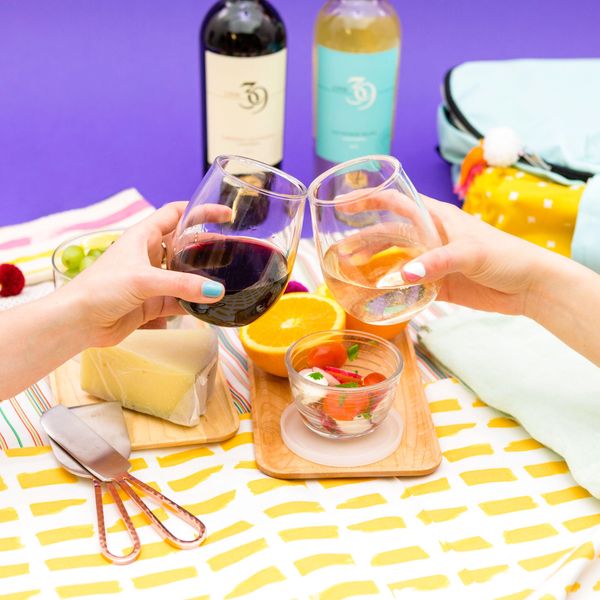 Alcohol is often associated with late nights and regretful hangovers. But drinking can also mean QT with your girlfriends and great skin. Say what now? As it turns out, alcohol isn't as bad for our complexions as we thought, so long as we consume a glass here and there — not a fishbowl with friends on a Friday night (oops!). However, just like our taste buds, our skin is picky about our liquor choices.

The Best Alcoholic Drinks for Your Skin

Red wine might not compare to your sacred bottle of vitamin C serum, but it's not the worst thing that can happen to your complexion. According to Debra Jaliman, a board-certified dermatologist in New York City, it's the best boozy beverage to consume. "There are studies that one glass of red wine per day for women is good because it contains resveratrol — a known powerful antioxidant [with] anti-aging properties," she notes. And while she believes you can reap its antioxidant benefits by indulging in a glass of red wine, she says "much more resveratrol can be packed into skincare." Products formulated with resveratrol (or other polyphenols) have been known not just to slow down the aging process, but also reverse visible signs of aging — like pesky sun spots, fine lines, and wrinkles — too.

As beneficial as red wine can be, it's important not to go overboard. "If you have skin conditions such as rosacea, you should be careful as it may aggravate or trigger a flare-up," says Jaliman. On top of that, the sugar in alcohol can have a lasting impact on the skin's youthful appearance. "Alcohol also causes dehydration of skin, leading to pronounced lines between the eyebrows, droopy eyelids, [dry] skin, enlargement in pores, reddish skin tone, and deeper nasolabial folds," explains Alissia Zenhausern, a board-certified naturopathic physician in Scottsdale, Arizona.

Four Tips to Drink Your Way to a Better Complexion

While Zenhausern doesn't recommend we use red wine to achieve better skin, she understands the importance of a GNO and says some red wines — like organic ones — are better for beauty than others. Ahead, read her tips for choosing the best alcoholic bevvies for your skin.

1. Limit Drinking: "Drinking more than two glasses twice a week can actually interfere with the lining of your gut and can lead to gut inflammation, which can present itself on your skin," she adds. On top of limiting how many days a week you drink, Zenhausern also says to try not to drink two days in a row.

2. Be Picky: Drinking in moderation is one thing, but choosing high-quality alcohol is equally as important. Because of that, Zenhausern says to choose only the purest alcohols possible. "The United States allows grapes used for wine to be sprayed with Roundup," Zenhausern reveals. Roundup is a systematic herbicide that uses a chemical compound called glyphosate to kill weeds in crops. And while the Environmental Protection Agency does not consider the pesticide carcinogenic, those with concerns about non-organic products might want to steer clear and instead select an organic wine. In addition, Zenhausern says wines that come from outside of the United States — such as France — are safe because they do not spray their grapes with pesticides.

3. Avoid Beer: If you're not a red wine drinker, that's okay. However, beer is not the next best pick. Because it contains gluten, Zenhausern says it can trigger gut inflammation, which can easily turn into skin inflammation. If you can't resist, Zenhausern suggests opting for a gluten-free alternative like Green Dubbel Dark Ale or Stone Delicious IPA.

4. Drink Water: Since any alcohol — even one claimed to be the best for your skin — can dehydrate your complexion, Zenhausern says always drink at least one glass of water for every glass of wine. "This will help keep you hydrated and will prevent dehydration of the skin," she explains.

Do you have a favorite organic red wine? Tell us @BritandCo!