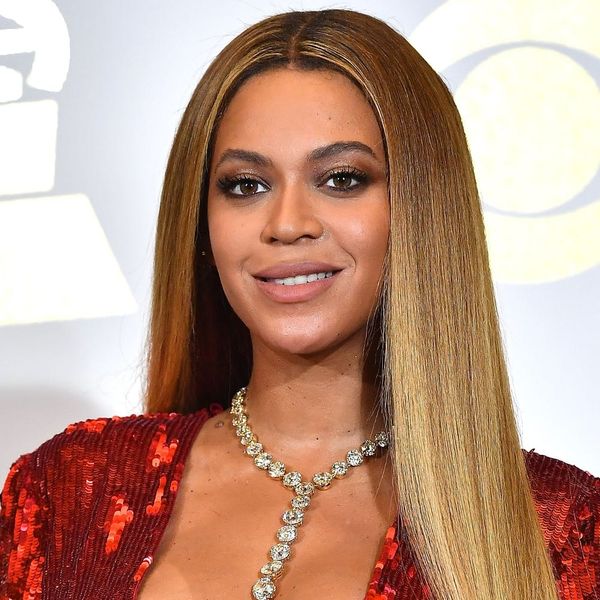 Beyoncé’s pregnancy has been filled with plenty of unforgettable moments stemming from the very moment she announced that she was expecting twins. There was that awe-inspiring Grammys performance, puh-lenty of glam maternity looks, and even some controversy over her appearance (believe it or not, the diva has been body shamed!). Last night may have topped them all, however. Despite false reports that she had actually already given birth, Beyoncé was photographed with a still very-pregnant belly as she celebrated the impending arrival of her twins with a push party that was every bit as fierce as you’d expect.

Dubbed the “Carter push party,” the bash was a colorful affair that took place in a bright orange space with plenty of bold patterns and an envy-inducing guest list which included expectant mama Serena Williams, actress Lala Anthony, and, of course, Bey’s Destiny’s Child fam, Kelly Rowland and Michelle Williams, who she recently reunited with.

The belle of the ball, Mrs. Carter, attended the event with “a bare belly and her stomach covered in henna tattoos,” according to People. It was a bold look which got plenty of praise from BFF Williams, who told reporters: “She’s holding it down for so many other women that are with child and showing them, okay, still be as fierce as you feel and as you can because some women do have a hard time and don’t feel as great all the time.”

Check out the party-goers’ best snaps below!

This woman gets more beautiful every time i see her!! Hotttness personified!!! @lala ❤️❤️

1. Mama Knowles in the House: Tina Knowles made sure to share lots of highlights from inside the get-together on Instagram, starting with this glam shot of herself and Lala. “This woman gets more beautiful every time i see her!!” she wrote. “Hotness personified!!!”

All theses beautiful ladies at The Carter Push party! ❤️❤️

2. Fab Decor: We also have Mama Knowles to thanks for this fun clip of the gals jamming out with one another as they scream “Happy Carter push party!” and blow kisses at the camera.

3. Edible Art: Perhaps one of the most impressive elements were the two multi-tiered cakes which were adorned with zebra stripes, leopard spots, and even a giraffe pattern. Yum!

4. Fierce Fashions: Michelle Williams took a moment away from the crowd to show off her party outfit, striking a pose outside of the event in her colorful dress paired with an equally bright choker and headdress. YAS!

5. Poolside Fun: The party also made its way outdoors to a sunny pool area complete with a bar, giant inflatable zebra and giraffe floaties, and a tent in which guests could get some shade.

6. Balloons Fit for a Queen: Greeting guests were two sets of GIANT gold letter balloons to let them know they were in the right place.

7. Fun, Fun, Fun: Mama Knowles gave us one final glimpse at the festivities with a second vid that showed off even more guests and their AMAZING dresses, which she captioned: “Fun fun fun. Angie, Serena, lala, Vanessa Kelly, Lorraine.” Talk about goals.

What do you think of Bey’s bash? Tweet us @BritandCo.