The Most Moving Brussels Attacks Art Tributes on Social Media 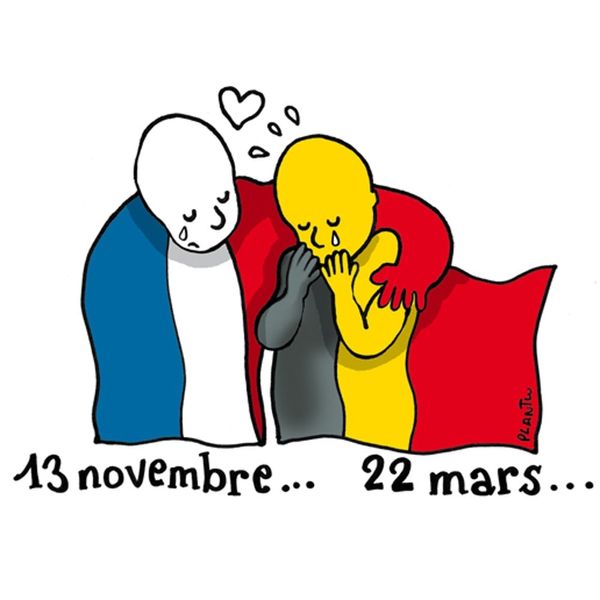 In the wake of a modern tragedy, social media has become an immediate and global forum to show support for those affected by terrorist attacks. When the Paris Attacks happened, Jean Jullien’s peace for Paris symbol was shared all over Twitter, Instagram and Facebook. As more and more details are uncovered about the recent attacks in Brussels, social media users are yet again creating heartfelt tributes to victims and Belgium as a whole. Here are the most moving images we’ve seen on the Internet so far.

1. Plantu: Tying together the two recent ISIS attacks, French cartoonist Plantu created this moving personification of the French and Belgian flag helping each other through the hard time.

Thinking of those affected in #Brussels right now pic.twitter.com/QZz07CO6uL

3. Grand Palace: Outside of the Grand Palace in Brussels, residents are using chalk to scribble their tributes on the streets of the city.

On this day, my heart goes out to all the people of Belgium. #PrayForBrussels ❤️🕊❤️🕊❤️🕊❤️

4. Reese Witherspoon: Reese took to Instagram to share this moving illustration by Huffington Post’s illustrator Geesubay alongside the caption, “On this day, my heart goes out to all the people of Belgium.”

5. Ruby Rose: Alongside this hand-lettered drawing Ruby wrote, “Beyond sad to hear the news this morning. When will we stop these senseless acts of violence. My heart goes out to Brussels.”

6. Vladdo: The beloved cartoon character is based out of Belgium and was created by Belgian artist Georges Remi. After the attacks, Tin Tin quickly became a symbol of solidarity. This illustration was created by cartoonist Vladdo and translates to Tin Tin exclaiming, “My God!”

7. Margherita Urbani : This Italian illustrator, graphic designer and art director showed her support for the country in the best way she knew how: with Pantone color cards.

8. Narduo: Brussels’ famous statute Manneken Pis immediately became the subject of political cartoons in the wake of the tragedy. While many depict the little boy urinating on terrorist and various other symbols of violence, Narduo’s version opted for a more somber tone.

9. Burger King: This photo was originally a Burger King ad in New Zealand, but the photo has been cropped and given a new meaning as Brussels uses this clever formation of their famous snack as a symbol of defiance against terrorists.

10. Benjamin Cordova: As an ultimate tribute to Brussels, graphic designer Benjamin Cordova shared this collage of Belgium’s flag colors mixed with a photo of a vibrant street scene shaped into a peace symbol.

What tributes are you seeing on social media? Tag us in the image that moves you most on Instagram @BritandCo.

Cortney Clift
Cortney is the senior writer and special projects editor at Brit + Co. She typically covers topics related to women's issues, politics, and lifestyle. When she's not buried behind her computer you'll find her exploring New York City or planning her next big adventure.
Art
Entertainment
Art
More From Entertainment