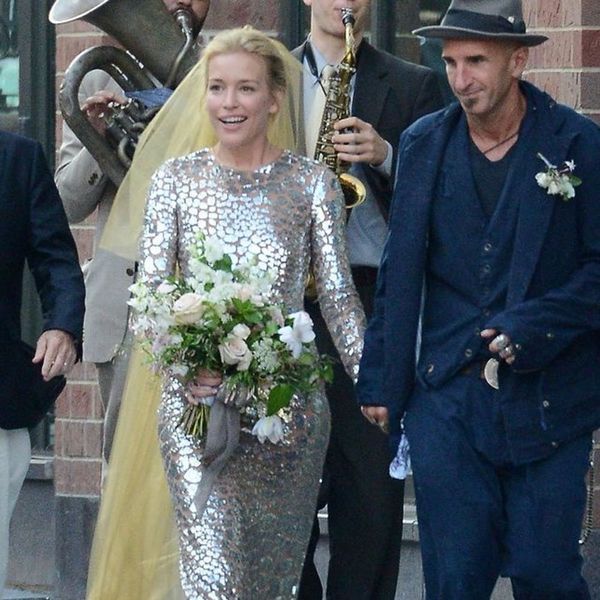 When you picture a wedding, your first thought is probably a classic white dress (popularized by Queen Victoria at her wedding in 1840). But that doesn’t mean it’s the only way to go. Non-traditional hues, silhouettes and styling can be every bit as wedding-worthy. Planning an off-beat walk down the aisle? Take a cue from celebs, like Olivia Palermo and Solange Knowles, who got hitched in something slightly less conventional.

2. Piper Perabo: One bride not content with a white wedding dress? Piper Perabo. The actress opted to wear a textured metallic gown and yellow veil when she tied the knot to producer Stephen Kay in July 2014. (Photo via FameFlynet/Popsugar)

3. Alicia Keys: Who says a veil is non-negotiable? Alicia wore a Grecian-inspired Vera Wang gown and swapped out a veil for a show-stopping headpiece when she married Swizz Beatz in an intimate Mediterranean ceremony in September 2016. (Photo via Bauer Griffin/Eonline)

This moment... This man... I'm so happy! ❤️ || We are still getting photos back from our wedding, so I'll be sprinkling some of these into my feed as I get them

4. Lydia Hearst: The couple that eschews tradition together, stays together. Lydia and Chris Hardwick said “see ya” to it’s bad luck to see the bride in her dress before the wedding, posting pre-wedding pics on Instagram. Yep, that means he got a sneak peek of her stunning pink ombre Christian Siriano gown.

5. Olivia Palermo: Known for her impeccable style, Olivia (not surprisingly) wowed on her wedding day. Instead of a single white dress, she donned three sophisticated cream pieces, courtesy of her fave designer Carolina Herrera. (Photo via Johannes Huebl/Olivia Palermo)

6. Solange Knowles:Solange and video director Alan Ferguson made it official in New Orleans in November 2014. The maven of hipster chic donned a caped Humberto Leon for Kenzo gown and Jill for Lady Grey bracelets. (Photo via Rog Walker/Vogue)

7. Hilary Rhoda: The statuesque model looked like a vision when she wed NHL player Sean Avery in an intimate ceremony in Water Mill in October 2015. The bride showed off her slender figure in a modern Carolina Herrera column gown, featuring a plunging neckline, jade embellishment and grosgrain detailing. (Photo via Matt Agudo/INFphoto.com/Eonline)