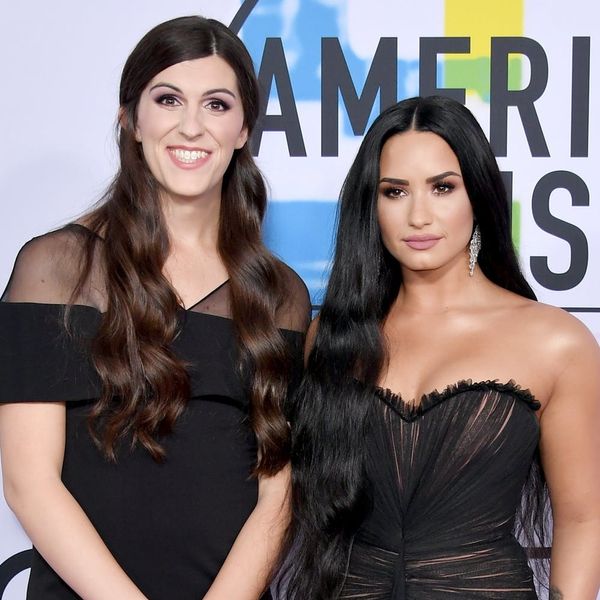 Demi Lovato may have brought the house down during her live AMAs performance of her hit “Sorry Not Sorry” last night, but it was her red carpet date that’s been keeping people talking about the singer. Lovato chose Virginia Representative Elect Danica Roem to keep her company on the red carpet, just weeks after Roem’s historic win inspired the singer as well as many around the nation.

After being elected to the Virginia House of Representatives, Roem made international news as the first openly transgender woman to be elected to the US legislature, having handily defeated incumbent Bob Marshall (Virginia’s self-proclaimed “Chief Homophobe“).

“When I heard that [Roem’s election story], I was just completely inspired by it,” Lovato said of her date. Lovato added that Roem’s story, and how she’s been attacked in the media, really resonated with the message in “Sorry Not Sorry,” a song penned to clap back at those who’ve been hurtful to the star on social media.

“I wanted to have her in the audience with me tonight because I feel like we’ve been through some of the same things. Now we get to share this experience together,” Lovato said. And the feeling is more than mutual.

“I’m also grateful that Demi has spent her career advocating for people who need a voice when they feel voiceless, and that she really understands that no matter what you look like, where you come from, who you worship, or who you love, you should be welcomed and celebrated because of who you are, not despite it,” Roem gushed of her last-minute date.

.@ddlovato and Danica Roem both look STUNNING tonight. I can tell this performance is going to INSPIRE! ✨✨✨ #DEMIxAMAs pic.twitter.com/qI4ug6mwlD

Of course, being the professional she is, Roem’s last minute invite didn’t stop the newly minted rep from working while on the red carpet.

“We need to build up our infrastructure, not tear down each other,” Roem said, running off a laundry list of her goals for her community as their newly elected leader (including fixing the much-maligned Route 28, the source of many of her county’s traffic woes and a major piece of her platform).

After the show, Roem was back on a plane heading home for a 7:30am meeting Monday to help work toward making Virginia schools more inclusive. Can we call her the hardest working legislator in the country?

What do you think of Demi Lovato’s AMA’s date? Tell us @BritandCo!

Kat Armstrong
Kat has been a writer, social media maven and mom for longer than she's willing to admit. She's also spent time in front of and behind the camera, interviewing celebs, politicians and acting as a producer for fashion and artistic photography shoots. When she isn't writing for various orgs and publications, she's hanging with her kids, husband and French Bulldog, Peter, in Toronto, Canada.
LGBTQ
Celebrity News
LGBTQ Music Politics Red Carpet