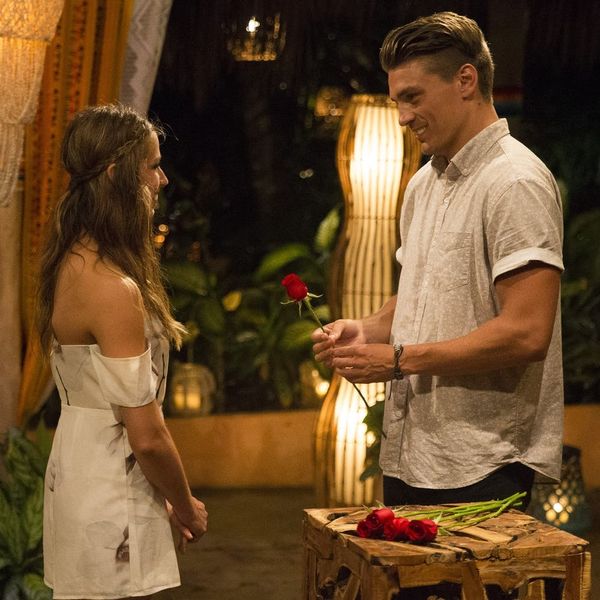 It’s been an interesting journey, to put it nicely, for Bachelor in Paradise alums Dean Unglert and Kristina Schulman. While the two initially got off to a great start, with Unglert pursuing the 24-year-old Bachelor alum and even heading to her hometown of Kentucky during the show’s break from filming, it was a whole different story once cameras began rolling again. Unglert pursued another contestant, Danielle Lombard, leaving everyone, Schulman included, totally confused.

Schulman exited the show early when Unglert said he wanted to see where things went with Lombard. But she’s managed to keep things civil — friendly even — with her former paramour since then. In fact, just yesterday, they were spotted together at a radio station with some other Bachelor Nation stars.

While the jury’s still out on their current relationship status, we are getting a front row seat to some of their extremely awkward post-show interactions, thanks to Unglert’s podcast, Help! I Suck at Dating.

In a teaser for his latest episode, the 26-year-old gives Schulman an unexpected phone call in an effort to understand what exactly went wrong between them. “Since you and I have dated each other, I would love for you to tell me why — what I do that’s so sucky at dating?” he asks.

“Oooh, that’s a bad question — but a good one,” she quips. “Are we serious about this?”

After he assures her that he is, in fact, totally serious, Schulman obliges her TV fling, saying, “What I’ve noticed with you, and I’m sure the rest of America has too, is that you have this wall up, and you’re always joking, and you’re smiling, but as soon as someone gets past that wall, you have a lot to say, you have a lot going on,” she begins. “You’re better at communication now, because I think you’re a little more open to me and to everyone else, but I think that was a huge thing.”

When Unglert plays devil’s advocate, asking whether it’s not more fun to have a relationship full of smiles and laughter than to have one where you’re always talking about your feelings, Schulman explains why talking about your feelings is a good thing, saying, “Well, of course, you can have all of those things, but how does the relationship get stronger or deeper without talking feelings?”

When she suggests that she may have put too much pressure on the situation, Unglert says she shouldn’t put the blame on herself and asks instead for more pointers, which she offers, but not before expressing how weird it is to be critiquing someone she wanted to date at one point.

Besides his lack of communication, she admonishes his tendency to “sugarcoat” things, explaining, “You try to find a roundabout way. But sometimes it’s best to just say it. It might hurt… it’s going to sting in the moment. It’s better than finding out later.” (We can’t imagine what she might be referring to!)

From there, Unglert moves on to other, more pressing matters — like whether he’s a good kisser. “I feel weird talking about all of this,” she says, before ultimately conceding that yes, he is, in fact, a good kisser.

You were out of my league

After tackling several more tough questions, like whether they would have hit it off in another setting (maybe… eventually… after being introduced by friends) and how she’ll think of him in 20 years (as a nice guy with a good heart, despite it all, and as a “good lesson” in dating), the phone call ends on a predictably weird note.

“Are you serious?!” she asks. “You didn’t get some pleasure out of talking to me?”

Judging by his parting line — “I wish you the best” — we’re going to guess that those rumors about them dating are just rumors. But who knows with these two?

Listen to the podcast teaser in full here.

Do you think there’s any hope for these two? Tell us over @BritandCo.

Nicole Briese
Nicole is the weekend editor for Brit + Co who loves bringing you all the latest buzz. When she's not busy typing away into the wee hours, you can usually find her canoodling with her fur babies, rooting around in a bookstore, or rocking out at a concert of some sort (Guns N' Roses forever!). Check out all her latest musings and past work at nicolebjean.com.
the bachelor
Celebrity News
the bachelor The Bachelorette
More From Celebrity News