Steal These Easy Celebrity Hairstyles for Your Valentine’s ‘Do 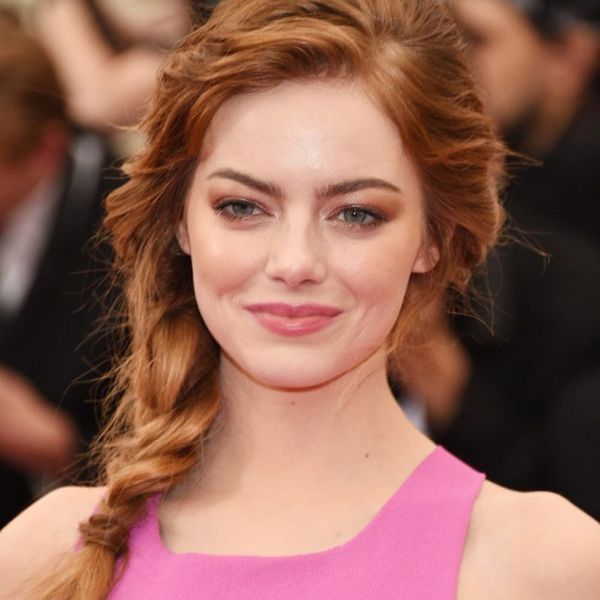 We don’t know about you, but we have a problem… a date-night-hair-rut kind of problem. V-Day is fast approaching, so for everyone who has been stuck on the same hairstyle since forever (guilty!), now’s the time to up your game. While it might raise some eyebrows, we’re giving a thumbs up to stealing. When you’re in need of inspiration for a head-turning hairstyle, who better to copy than your favorite A-listers? Scroll on to see the hottest celeb styles to pull off your own chic ‘do.

1. Sarah Hyland: Top knots are one of those no-fuss updos that you can count on, even when it’s raining or you’re dealing with second-day hair. Just remember to texturize your with a comb for optimal volume, and make sure there are a few loose strands to keep it from looking too contrived. (via Frazer Harrison/Getty)

2. Selena Gomez: Not into the top knot? Take a cue from Miss Gomez and wear the bun a bit lower for a classy, sophisticated look. (via Jason Merritt/Getty)

3. Zooey Deschanel: This quirky side bun + flower combo Zooey wore to the 2014 Golden Globes is completely irresistible. While V-Day might be a flower-crown occasion, those who aren’t feelin’ that much flower power can opt for a single rose. (via Jason Merritt/Getty)

4. Blake Lively: We’ve been swooning over every Blake hairstyle since we first fell in love with her as Gossip Girl’s Selena van der Woodsen. Now that she’s Mrs. Ryan Reynolds, we’re even more obsessed. This undone side pony with braids has all kinds of good going for it. (via Alberto E. Rodriguez/Getty)

5. Jamie Chung: We want Jamie’s hair. But since that’s sorta-kinda impossible, we’ll settle for recreating some of her most iconic looks, like this half-up style with braids and hair jewels. (via Frazer Harrison/Getty)

6. Charlize Theron: Who else but Charlize knows how to transform into a modern-day Cinderella? An updo this romantic is sure to put your SO under a magical spell. Grab a glittery headband and your curling iron to recreate this look. (via Jason Merritt/Getty)

7. Emma Stone: If anyone knows how to pull off simple and stunning simultaneously, it’s Emma. She first captured us in The Amazing Spiderman 2 with her stellar performance + stunning locks, and now we are hopelessly entranced. You can’t go wrong with Emma’s voluminous side braid. (via Larry Busacca/Getty)

8. Tessa Thompson: If you’ve got the curls, why not flaunt them? Don’t got ’em? Just use texturizing spray and curl small sections of hair away from the face with a small-barreled iron to achieve the sweet spirals. (via Frazer Harrison/Getty)

9. Taylor Swift: Taylor stole the show at this year’s Victoria’s Secret Fashion Show, wearing her luscious golden locks in cute waves. To get her look, use big velcro rollers for just the right amount of wave and pump up the shine with some Argon oil or your fave shine spritzer. (via Pascal Le Segretain/Getty)

10. Reese Witherspoon: Reese brings classic hairstyles we adore to the big screen and the red carpet, and these glam curls are no exception. They’re the perfect way to turn heads. (via Jason Merritt/Getty)

11. Kerry Washington: We’re diggin’ Kerry’s no-fuss approach. Go for a little texturizing spray for a more “undone” beach-y effect, then spritz on some shine, and you’re good to go. (via Jason Merritt/Getty)

12. Amanda Seyfried: Don’t give up on the braid. Until now, you probably thought you’d seen every possible variation of the plait. We love how Amanda’s pretty side braids collide to form a cute knot/pony. (via Jason Merritt/Getty)

13. Maria Menounos: Blow your date out of the water with a sleek, high pony. Maria Menounos proves that we’ve totally been underrating this hairstyle. (via Frederick M. Brown/Getty)

Which of these styles do you plan to steal for V-Day? Tell us in the comments about which look you’re most excited to try.

Bethany Kosten
Bethany Kosten is a freelance editor at Brit + Co. and an information junkie who is passionate about creating and consuming clever content. Being an idea enthusiast makes her unique, but also — and this is critical — awesome. Side note: Bethany is a serial chips and salsa eater. (Seriously, hide them.)
Blake Lively
Hair
Blake Lively Celebrity Hair Date Night Hairstyles Kerry Washington Reese Witherspoon
More From Hair