14 Ideas for the Cutest First Birthday Ever 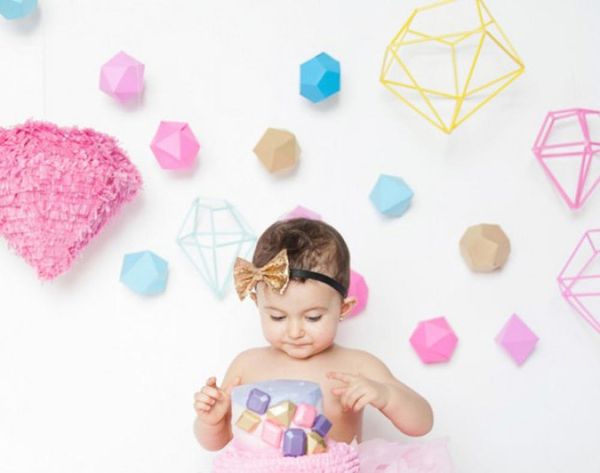 Your baby’s first birthday is a big deal. Not only do you get to reminisce and get all weepy about the day that life changed for the better and relish all the milestones your little one reached in the last 365 days, but it’s also an opportunity to celebrate the fact that you survived the first year of parenthood. Woohoo! You made it! After all the 3 a.m. feedings, diaper duty, being covered in spit up and drool every second of the day and not remembering what a full night’s sleep feels like, you deserve a party. Here are 14 birthday party themes that both you and the guest of honor will adore.

1. Strawberry Fields: Inspired by a daughter’s favorite food, this strawberry motif is perfect for a sunny afternoon. Complete with real strawberry plants for the centerpieces and strawberry shortcake for dessert, this is one sweet party. (via Oh So Beautiful Paper)

2. Snow Bunnies: Have a birthday during the colder months? Don’t long for a pool party — embrace the season and throw a snow bunny party. Who needs to splash around when there’s a grilled cheese bar and a hot cocoa table? No one, that’s who! (via Hostess with the Mostess)

3. Around the World: The first year of parenthood is quite an adventure. Take your guests on a trip around the world with this vintage airplane theme. (via Hostess with the Mostess)

4. Ice Cream Social: Instead of the typical backyard barbecue, throw a modern ice cream soiree. Give your guests endless options (bowl or cone, sprinkles or chocolate chips) and let them dream up something sweet. This is one party worth screaming about. (via PopSugar)

5. She’s a Gem: Love bright colors and modern geometric shapes? A DIY labor of love, this party is our favorite on the list. After all, your little one deserves nothing but the best on their big day. (via 100 Layer Cakelet)

6. Parisian: Transport your guests to Paris for the afternoon. Creating black tape outlines on the walls is an easy DIY project that can be done in one afternoon and makes a huge impact. Fair warning: You might find yourself wanting to keep the outlines up even after the party is over. (via Lil Sugar)

7. Under the Sea: With a muted palette of aqua, pool blue, peach and gold, this under-the-sea party can easily be adapted for a girl or boy. Use this tutorial to make the adorable hanging paper boats. (via Lil Sugar)

8. Pretty as a Peach: Just because the party is for a one year old doesn’t mean it has to be filled with cartoon characters. Using peach instead of the typical pink adds an air of sophistication, while the silver sparkle details keeps it fun and youthful. (via Lil Sugar)

9. Woodland Adventure: Roam around on the forest floor with this woodland shindig. Toadstool cupcakes, tree stump cake stands and pinecone accents add to this party’s charm. Childhood is full of whimsy and fun, and the parties should be no exception. (via Spaceships and Laser Beams)

10. A Year in an Instant: It’s not uncommon to watch a child grow via an Instagram feed, so when the first birthday rolls around, why not let everyone travel back down memory lane with you? (via Kara’s Party Ideas)

11. Golden Safari: A safari theme doesn’t mean cutesy cartoon animals taped to the walls. By sticking to neutral colors, like white and gold, the party will look put together and cohesive. (via Hostess with the Mostess)

12. Up Inspired: This party proves that you can pull inspiration from something without making it a completely literal representation. From the DIY map baking cups to the hot air balloon photo prop, this is how a kid’s party should be done! (via Lil Sugar)

13. Modern Geometric: To avoid feeling limited in the decorations, the parents simply chose a color palette and went from there. The end result is not only fun and totally appropriate for a one year old, but something you won’t mind looking back on in years to come. (via The Manions)

14. Twinkle Twinkle Little Star: Instead of having a big party, host a mother-daughter lunch! With tiny finger-friendly food, like star-shaped peanut-butter-and-jelly sandwiches and tortilla chips, you’ll have plenty of time left over to focus on the small details — like making each guest their own magic wand! (via PopSugar)

How are you going to celebrate your little one’s first birthday and your first year as a parent? Lay it on us below!

Ashley Tyler
A South Florida native, Ashley is a new mom who is just trying to figure it all out while still finding time to blog at TWO TYLERS AND A BABY. There, she shares bits of her everyday life, DIY projects, recipes and everything in between.
Birthday
Parenting
Birthday