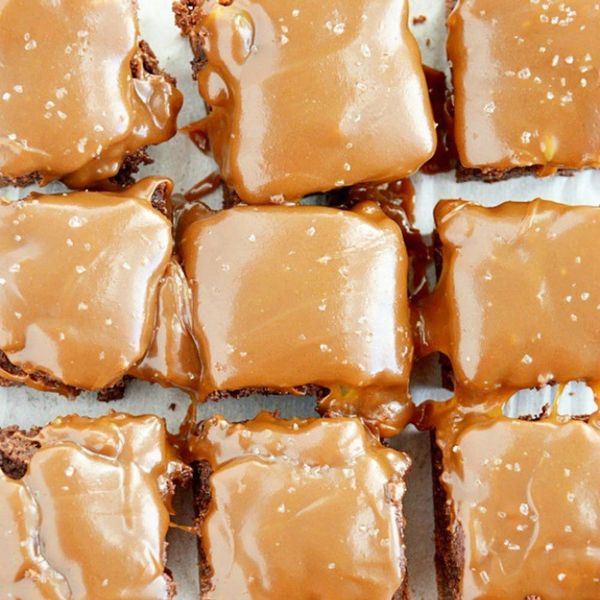 Whether you prefer 'em old style, packed with newfangled flavors like pumpkin or potato chips, or even spiked with red wine, brownies have got to be THE treat that tops all others. So when it's time to indulge, you want the most over-the-top brownie recipe you can find, amiright? Here's where Pinterest comes in. On Pinterest you'll discover brownies that have been pinned not just *hundreds* of times, not just *thousands* of times, but tens of thousands, hundreds of thousands, and yes, even a million+ times. Here are 15 of the most ooey-gooey rich and chewy brownies, as ranked on Pinterest.

So, what makes THIS brownie the million-plus-pins brownie on Pinterest? Pure decadence. It's a super thick and fudgy brownie that's been densely filled with chocolate chips, then topped with a layer of salted caramel — so what's not to love? (via Something Swanky)

I don't know whose lunch lady first made these babies, but she was a pure genius. There's nothing like a fudgy brownie with icing to match, made from real cocoa and butter. (via Life in the Lofthouse)

If you like yours fudgy, rather than cakey, this is the brownie for you. And the addition of everyone's fave hazelnut spread only makes it that much richer. (via Life, Love and Sugar)

This healthier take on the classic brownie has beat out so many more hedonistic versions, you've got to try it to believe it. Guilt-free goodies for the win! (via Chelsea's Messy Apron)

You're looking at Oprah's FAVORITE brownie, based on a recipe from Baked! bakery in Brooklyn. You need these in your life right now. (via Baker by Nature)

If a Mounds bar and a brownie had a baby, it would look like this. One bite of that coconutty goodness on top and you'll be in brownie hybrid heaven. (via Averie Cooks)

You had us at LOADED. This is like cookies meets milk, but in bite form. (via Averie Cooks)

These brownies are genius, because what is red velvet if not the chocolatiest batter around. But the inch-thick cream cheese icing is the real star of this show. (via The Recipe Critic)

If Chubby Hubby is your fave Ben & Jerry's ice cream, prepare to meet your new brownie obsession. The salty pretzel crust takes this caramel concoction to a whole new level. (via The Brick Kitchen)

There's a ton of heavy cream in this recipe, and you're going to taste every drop of it. This double-layer flavor bomb is what chocolate dreams are made of. (via Creme de la Crumb)

This one's like a brownie-caramel sandwich. Click through to learn the secret to heating up the caramels to ooey-gooey perfection while the batter bakes up cakey. (via Oh Sweet Basil)

This brownie is pure chocolate and peanut butter perfection. Like the throwback jingle goes: Two great tastes that go great together. (via Tastes Better from Scratch)

These bars taste EXACTLY like everyone's fave candy bar with the cookie crust, thanks to a crunchy layer of mashed shortbread cookie crumbs. Move over, Speculoos — there's a new cookie-batter boyfriend in town. (via Life in the Lofthouse)

Look, it's everyone's fave campfire treat, but extra *brownie* points for presentation. The graham crackers are represented by Golden Grahams cereal, making every little bar look *almost* too sweet to eat. (via A Spicy Perspective)

From Your Site Articles
Sally Jones
Sally Jones is a writer and editor living in New York City. She has worked at many websites including iVillage, Ladies Home Journal, More, Parenting, Cosmopolitan, The Knot and YourTango, in jobs ranging from editor to COO. Renovation and interior design are her unhealthy obsessions hobbies. She has renovated every home she's lived in, including the rentals, and like... whoa, who does that? You can catch her at her blog Renov8or.
Dessert Recipes
Dessert Recipes
Dessert Recipes Food Recipes Roundups Pinterest recipe roundup Sweets
The Conversation
Reviews:
More From Dessert Recipes