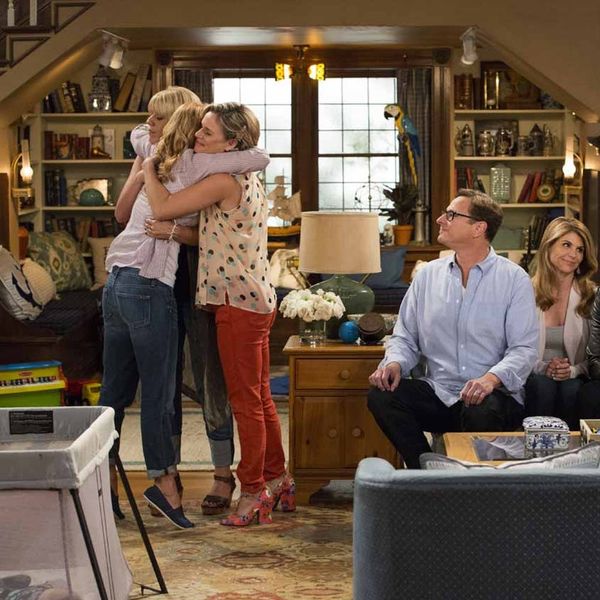 We’re weeks into 2016, and there’s nothing any of us can do about it. (Did you guys know the Oscars are only weeks away? Of course you did.)

But I digress. Pop culture is kicking, and this week we saw the premiere of The X-Files reboot, which sets the stage for the Netflixpremiere of Fuller House — AKA the reboot of Full House, set in 2016, with 95 percent of the same cast. (Minus Mary-Kate and Ashley Olsen, because they’ve grown up and become bigger than any of us could’ve possibly imagined.)

What’s interesting about the Full House reboot is that we’re about to see the same characters navigate 2016 — in a vastly different landscape than the original show was set. In 1987 (when the series premiered), the idea of a single dad, with help from his brother-and-law and friend, raising his children in the wake of a parental death seemed interesting and original. It was even arguably unconventional, since the arrangement set up ideas of dating, empowerment, and social acceptance. Writers even threw double entendres into the mix as a means of modernizing a sitcom renowned for its cleanliness and family appeal.

But now our norms are different. While the story of a widower is still very sad, it’s in no way unconventional enough to draw our attention away from series like Mr. Robot, Modern Family, Black-ish, or Fresh Off the Boat that address issues of mental health, sexuality, race and sexism on a regular basis. Today, to compel audiences, stakes have to be higher. And we also have to side with characters we should be rooting for.

The world has changed for the better in some ways, and these TV reboots will need to reflect that. In 2016, Stephanie Tanner (Jodie Sweetin) can’t just insult Kimmy Gibbler (Andrea Barber) by making digs about her sex life — she should know the damaging nature of insults like that, and we’d hope that she knows jokes like that are also lazy and embarrassing. In Fuller House, Stephanie would need a real reason to hate Kimmy — or a real reason to justify her rudeness. And while drama is fine, in this day and age we’d need to know why the entire Tanner family banded together to launch verbal strikes on a teen girl. (And please, creators, if you can read this: Have Kimmy address that in the pilot.)

But Fuller House isn’t the only series we’ll see resurrected this year. (Dun, dun, dun.) While no date has been officially announced, Gilmore Girls is rumored to come back in 2016, which will be another interesting take on the evolution of family dynamics (since, as we know, a lot’s changed since 2007).

Enter: issues of class. While we know Lorelai (Lauren Graham) struggled to make ends meet as a teen mom, she eventually reunited with her parents, who were there to consistently pick up any financial slack, especially when it came to their granddaughter, Rory (Alexis Bledel). Lovely! Great! But since Rory ended up pursuing a career in journalism, this means she’s spent nine years watching the way our economy’s been flailing. Which also means that she’d likely become aware of the difference between her grandparents and the residents of Star’s Hollow and also the rest of America. And since Rory’s smart and argumentative, we can only assume the Gilmore Girls reboot would need to address this — especially since the series was renowned for its candor in terms of everything from social awareness to academia to female empowerment to sex.

I feel you, Lorelai. Also, because back in the 2000s (never forget), a close mother/daughter relationship was relatively rare — at least in terms of sharing the truths of one’s personal life. But now? We share what we’re up to on Facebook, Twitter, Instagram, tumblr, and Snapchat, meaning that most of our parents now know as much about us as our friends do. This means there’s room to watch Lorelai’s mom navigate the ins and outs of social media (because Emily is hip, and we all know it), or to see Lorelai learn the boundaries most of us have had to teach our parents when they start getting too real on our Facebook walls.

The thing is, reboots can do cool and interesting things for television, provided they work to reach 2016’s cultural standards. It’s not enough to watch a family get along anymore — and we need to see more than a close-knit mother and daughter team up against the world.

In 2016, we’re painfully aware and transparent about how messy life can be and how complicated it gets and how awful it must be for, say, DJ Tanner to move back home and raise her kids in the wake of her husband’s passing. We’re ready to peek behind the faux familial curtain and get a glimpse of the realities of being alive. We’re ready to stop pretending Uncle Jesse was stoked to live in his brother-in-law’s attic while raising two of his own kids with his wife. We can handle feeling weird about Uncle Joey’s failed comedy career, or about how Rory knew a little too much about her mom’s dating life.

So let’s hope this year’s reboots deliver. If only so we get more wicked GIFs.

Are you tuning into Fuller House or the Gilmore Girls reboot? Tweet us about it @britandco!