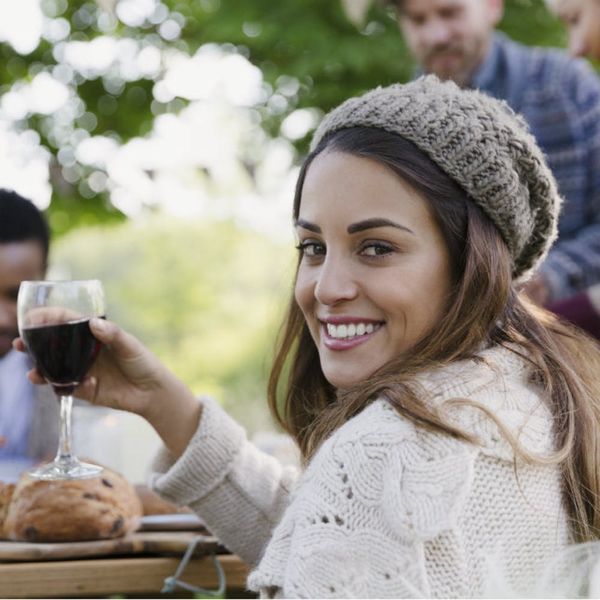 Let’s be real: January 1 was rough. And it’s not because we got anxiety from getting too carried away with goal-setting in every aspect of our lives. It was because of the cocktails. Sooo many NYE cocktails. Based on how we were feeling the first few days of the new year, Dry January is a great idea in theory. But after the first week back at work, it can seem pretty darn unrealistic to a lot of us, and we’re not about to feel guilty about having a nice glass of Pinot Noir with dinner. And there’s no reason to. We’ve come up with seven alternatives that are just as healthy — some scientists might even say healthier — than jumping on the (super not fun) Dry January trend.

GOOD REASONS TO NOT DO DRY JANUARY

There are only two reasons anyone is doing Dry January in the first place: to kickstart healthier long-term habits or to have an ongoing reason to act like you’re better than the rest of us for an entire month (have you met someone who did #DryJanuary without tweeting about it?). And for those in the former category, Dry January can act like a crash diet. You may lose some weight and sleep better for a month, but come February, when you’ve been dreaming about what your first cocktail will be for weeks, you could experience what studies call the “rebound effect,” and drink all the drinks (and maybe, then, similar to a failed diet, eat all the munchies too).

“Unfortunately, for many people, stopping drinking for a month to improve your health often has the opposite effect, because the deprivation often becomes so bothersome that you just say ‘screw it,’ and dive in harder back to drinking,” says Dr. Steven Gundry, a renowned cardiac surgeon and director of the International Heart and Lung Institute. Dr. Gundry also explains another major reason Dry January isn’t that great for you: “Consumption of alcohol produces an enzyme in your liver called alcohol dehydrogenase that helps detoxify alcohol. Stopping drinking alcohol completely means that this enzyme falls. When you restart drinking, even smallish amounts of alcohol can give a surprising buzz and an elevated blood alcohol level,” he says.

You’re going to be a lot healthier in the long run if you drink moderately year-round. And Dry January, according to habit-building science, isn’t going to help you build a habit of responsible drinking. Setting small, consistent drinking goals and meeting them will. Good news: You have all year to do something good for your liver AND don’t have to have a boring (we kid…) Dry January. The bad: It may actually be harder to stay consistent (hey, all you Dry January challenge nuts) to turn down a few drinks when you’re not still hungover and bloated from the holidays.

Finally, on a country-wide level, Dry January, which caught on as an internet trend in 2006, isn’t working. Americans are drinking more — way more — than ever, with 18.3 percent of Americans consuming enough in 2012 to qualify as binge drinkers, up nine percent since 2005. That definitely doesn’t sound like a healthy, moderate-drinking trend to us.

OKAY, FINE, THERE ARE SOME REASONS TO STAY DRY

The same University of Sussex study that warned of the rebound effect Dry January can have also found that Dry January seemed to drive some healthy changes in moderate drinkers. The study shows that if you do Dry January, you’re likely (57.6 percent of respondents) to be drinking less and with less frequency six months later. That’s some compelling data, but if Dry January still just doesn’t jive with your lifestyle, we’ve developed some healthy booze-focused alternatives that’ll still have you feeling better come February.

1. Only drink a couple of nights a week. Again, allowing yourself to develop a healthy, moderate relationship with alcohol, but not totally giving up your social life, is important for habit building (otherwise you’re definitely going to cave and go crazy at the clurb). Dr. Gundry recommends this approach, reminding us to not make up for lost time on the weekend. Maybe instead, you limit yourself to one drink a day. Whatever moderation looks like for you, set a realistic goal and stick to it for January. “Your liver enzymes will stay revved up and ready to handle that cocktail or glass of wine,” he says.

2. Limit yourself to champagne for one month. Dr. Gundry recommends trying to mostly drink — in moderation, of course — champagne and red wine, staying away from beer and white wine. He explains that champagne grapes include polyphenols, antioxidant-rich nutrients found in plants, which studies show can improve memory in women.

3. Be smart about the wine you drink. If you aren’t into bubbles, avoid white wine, which has a lot of sugar, and drink a glass of red wine. “Red wines contain resveratrol, a heart-healthy, brain-boosting compound found in the skins of grapes, and quercetin, an antioxidant that can help regulate inflammation in the body,” Dr. Gundry explains. “Chose a Pinot Noir from a cool, rainy climate like Oregon, since it’s more likely to have high concentrations of resveratrol,” he says. A more exotic option: “ The higher in elevation the grape is grown, the higher the resveratrol is, so also go for Malbec or Cabernet varieties from Argentina.”

4. If you must, drink aged rather than un-aged spirits. Okay, so it’s your birthday month or you just really love a glass of scotch on Friday nights. “The wood from the barrel infuses the spirit with polyphenols. For example, anejo tequila has more health benefits than silver tequila,“ Dr. Gundry says. That means you can also reach for the whiskey and scotch.

5. Join a healthy challenge that you can only accomplish when you drink less. Sign up for a 5K and resolve to train three times a week, etc. Sure, you could train hungover, but will you actually keep going? Will it be enjoyable? No, no it won’t.

6. Stock your bar cart with fun mocktail ingredients. Then, resolve to make one new mocktail a week. Bonus, they’ll prob taste awesome with a little splash of gin — on your drinking days, of course. For lazy girls, you can still hit the town with friends on your mocktail night. Bars in New York have caught onto Dry January, and many of them now offer mocktail menus.

7. Make a single drink a reward for exercise. You want a glass of bubbles or are planning on attending a friend’s birthday and having a drink? Earn each drink with exercise — whether it’s 30 minutes at the gym, a yoga class or a long, brisk walk around your neighborhood. Planning on having three drinks at a friend’s going away party? Better start putting in those miles early in the week.

8. Trade in (most of) your nights on the town for a three-day weekend. Rewards are key, and we promise that one thing you’ll notice when you cut back on drinking is a whole lot more moolah in your bank account each month — even if you’re just going out one less day a week. Reward yourself for drinking moderately in January with a mini-vacay. And yeah, go to wine country and drink that sweet, sweet nectar. February may be the time to remind yourself what a hangover feels like, so that you vow to avoid them for the rest of the year.

9. Replace drinking with another stress reliever you think of as a treat. It’s way easier to embrace a new habit when you’re compensating with something else you love. For example, you may love taking yoga classes at your fancy neighborhood studio. So replace an extended happy hour with a slightly spendy yoga class. You’ll feel a helluva lot less guilty about spending $15 on a class when you’re saving a lot by cutting back on your weekday nightcaps too.

Are you going cold turkey for #DryJanuary? Tell us how it’s going @BritandCo!

Whitney Akers
Whitney is a writer that's equally drawn to the energy of a big city and the peacefulness of the Redwoods. If she's not lucky enough to be on an international adventure, you'll find Whitney enjoying all the urban hikes, used bookstores and fancy cocktails San Francisco has to offer.
Healthy Living
Health
Healthy Living Hit Refresh
More From Health