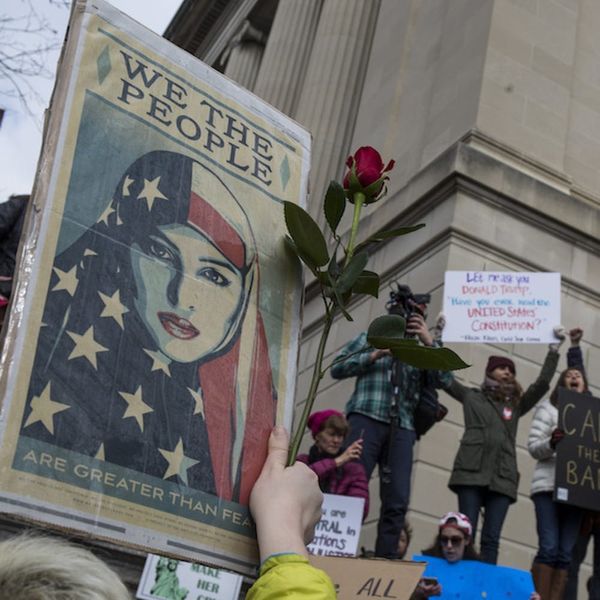 Since the day after Donald Trump was elected President, there has been a swell of protests and rallies for causes under threat from his administration, from demonstrations in support of women’s rights to standing up for the Muslim community after the highly controversial travel ban was initially put in place. There are so many protests that Michael Moore has even created a calendar to help you keep track and stay engaged.

The travel ban was widely denounced in Hollywood, and it even hit pretty close to home for a timely and specific reason: The ban would apply to Oscar-nominated director Asghar Farhadi, who, when the ban was still in place, would not have been able to travel to California for the awards. (Despite the ban currently remaining blocked, Asghar is boycotting the ceremony regardless, in response to President Trump’s executive order.)

The major Hollywood talent agency representing Asghar, UTA, announced in early February that it was cancelling its annual pre-Oscar party this year in support of not only their client, but of immigrants and refugees in the face of the now-blocked ban.

Instead of holding a party, UTA donated $250,000 to the American Civil Liberties Union and the International Rescue Committee, and plan to hold a rally outside its headquarters on Friday, February 24 as a “global exchange of ideas,” according to Deadline. (They crowdfunded an additional $293,000 to donate to the above organizations too.) Other UTA clients such as Minka Kelly, Mark Ruffalo, and Uzo Aduba have been vocal about their support of UTA’s rally and seem happy to be part of a company taking such measures.

Together we will rally for artistic freedom. To support the cause and add your voice visit link in bio! Proud to call this office my home. #TeamUTA #UnitedVoices

And they’re not the only ones ditching parties in favor of protests this year — AwesomenessTV has also made donations and plans to close its offices early so their staff can join UTA’s rally.

After Meryl Streep’s speech at the Golden Globes and the subtle political climate of the Grammys, we have no doubt that the Oscars this year will be much the same, and with major players like UTA and AwesomenessTV already taking a stand, it seems likely that the sentiment is here to stay.

Do you think the Oscars will be overtly political this year? Let us know over @BritandCo.