Kavanaugh and the Toxic Law of Male Approval 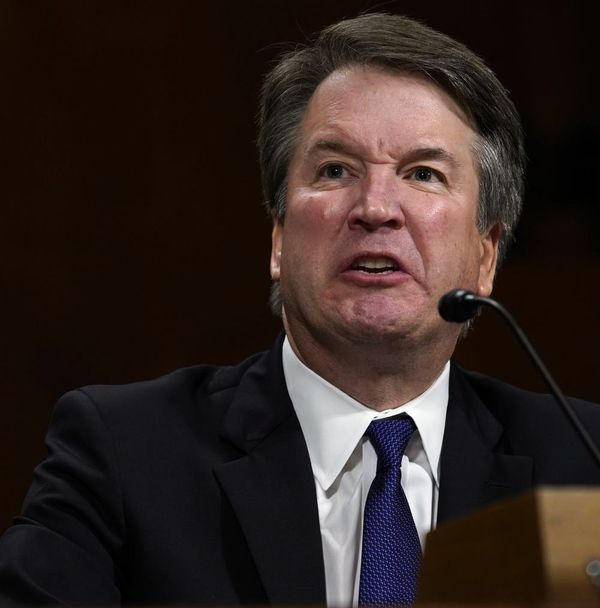 On Wednesday morning, two days ahead of the Senate Judiciary Committee’s scheduled vote on the Supreme Court confirmation of nominee Brett Kavanaugh, a third woman went public with sexual misconduct allegations against the conservative judge. In a sworn affidavit with a penalty of perjury, Julie Swetnick claimed that she had attended high school parties in the 1980s where she “became aware of efforts,” by Kavanaugh and his friends, to allegedly spike girls’ drinks to make it easier to gang rape them.

Amid the outcry that followed the allegation, Rich Lowry, editor of the conservative magazine National Review, tweeted, “One obvious question about this account: Why would she constantly attend parties where she believed girls were being gang-raped?” The implication, as I read it, was that no person in their right mind would frequent social gatherings where people like them were rumored to be getting hurt; either she’s a liar, the implication goes, or she wasn’t in her right mind.

Don’t worry: Lowry was swiftly called out for his apparent attempt to attack Swetnick’s credibility. For people like Lowry, a 50-year-old white male from the affluent suburbs of Washington DC, it may indeed appear “obvious” to interrogate the incentives for girls and women to knowingly cross thresholds into hostile male spheres. If the Brett Kavanaugh news cycle has made anything clear, it’s that many people are unwilling — or unable — to grasp that women’s exertion of agency in a world run by men is a never-ending cost-benefit analysis.

Unwanted male attention, and even complicity in male misbehavior, are among the countless unspoken footnotes in nearly every woman’s path to self-determination and success. The function of patriarchy is to compel individuals, regardless of gender, to seek male approval. As women, we are often accomplices to our own objectification.

As I’ve read through dozens of other women’s first-person accounts of gender-based violence and harassment post-#MeToo, I’ve considered moments where I, too, have found myself a forbearing tourist in the clubby domicile of bros. There was a time in my life where I would spend hours watching a then-boyfriend play video games with his pals while I happily fetched them beverages and snacks, desperate to convince myself I was, if not “one of the guys,” at least something like a “chill girl.” There was a time in my life where I would not leave the room, or get angry, or get even, when I was greeted with a joke at my expense by a dorm room full of boys I considered my friends. (They liked to insinuate that I was a walking yeast infection, and eventually the nickname “Yeasty” turned into “Bread,” which turned into “Oh look, here comes the bakery!” Not that it matters, but at that point in my life, I had never had a yeast infection. Not that it matters, but I kept coming back for a year.)

The quest for male approval equally drives male behavior, and frequently at the expense of women’s humanity. In Slate, Lili Loofbourow notes that the allegations against Kavanaugh share a few striking features: no penetrative sex, male onlookers, and, emphasis hers, laughter. That detail, laughter, was also what Kavanaugh accuser Christine Blasey Ford said in her Senate testimony on Thursday that she remembered most vividly of her alleged attack: “The uproarious laughter between [Kavanaugh and his friend] and their having fun at my expense.” Women are not human beings in these stories, but set-pieces in a performative bro-dom of heterosexual male bonding. A joke, a game. In the New Yorker, Jia Tolentino observes that the Kavanaugh news cycle “illuminates the centrality of sexual assault in the matrix of male power in America. In high schools, in colleges, at law schools, and in the halls of Washington, men perform for one another and ascend to positions of power.”

In order to obtain a piece of their pie — any foothold in the public sphere — we women perform, too. We perform indifference at men’s uninvited flirtations and slights. We perform agency and a thick-skinnedness that, according to script, makes no compromises for male access or a nod from male gatekeepers. Some of us eventually forget we’re performing in the first place.

For women who have established careers and identities, a sense of power and worth, a closer look at what those gains may have entailed can be devastating. It’s far easier to let bygones be bygones and assume the role of one tough cookie than to confront the humiliations of so many boys’ clubs. It’s one reason among many why I believe the women who have come forward against Brett Kavanaugh.

“I am here today not because I want to be,” said Ford at the top of Thursday’s testimony. “I am terrified. I am here because I believe it is my civic duty to tell you what happened to me while Brett Kavanaugh and I were in high school.”

There isn’t a shred of doubt in my mind that Ford would have preferred to be under the knife of an unanaesthetised root canal than rehashing a painful memory for a national audience on Thursday, 36 years after the fact. By and large, women don’t want to be victims. Women don’t want to have their power or their agency taken from them in the moment, and they don’t want to wear the marks of hurt and humiliation that stick. There is nothing appealing about being publicly defined in relation to someone else, as the person who did not have the power. People aren’t lining up to volunteer for the theft of their dignity.

We may never know the extent of Kavanaugh’s alleged culpability. What we do have in this moment is the evidence before us — an outpouring of women’s stories, from Kavanaugh’s accusers and legions of others — and that evidence says plenty. Each story corroborates the bleak bro code that governs all of us, irrespective of gender. If we want to overturn it, we must call it by its name.

Kelli Korducki is the Senior News Editor of Brit + Co.