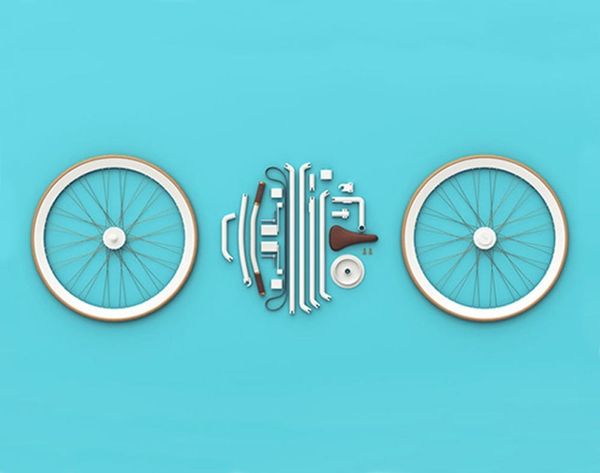 There’s just something so attractive about being able to carry things around in a backpack. Especially when they’re things that you never expected to carry around in a backpack — be it a cooler that’s also a chair that’s also a backpack, a foldable scooter or a bike. And while the Kit Bike isn’t the first bike in a bag we’ve shown you (remember Sada?), it is the only one we’ve seen that breaks down to such a wee size.

Concepted by Indian design company Lucid, the Kit Bike disassembles into 21 pieces, giving you the ease to travel with your bike… even when you’re not riding it. Imagine getting on the train without nearly knocking over every poor soul within a three-foot radius, taking your two wheels on a jet plane to Portland (so you can confirm or deny if it really is the most bikeable city) or even hauling it up to your sixth-floor studio walkup (not to mention storing it there).

Not only is the sleek, minimal white frame easy on eyes, but the circular leather backpack (circular to accommodate the wheels, in case that wasn’t clear) that it goes in is something we’d carry whether there was a bike in it or not.

By now you’re probably like, “Yeah, sure, that sounds great. But, 21 pieces?! It’s too many to put together quickly.” Well, allow the Lucid designers to blow your minds momentarily. The hollow aluminium bike twists and locks together, all sans tools and from one side of the bike. So prop it against a wall and forget about shimmying from side to side to get it ready to hit the road. It’s no wonder that Lucid won a Red Dot Design Award for it earlier this month.

We don’t need to tell you that gas prices are sky high and that, with more people in the world, city streets and freeways are more congested with cars, which is why we’re seeing so many bike innovations popping up on our monitors. Whether it’s Harley Davidson going electric and carbon-fiber smartbikes or rental services for wee ones and smart locks for your sweet ride, there are ideas wheeling around the cycling world that we want to hitch a ride on.

The Kit Bike is still in its concept phase, and there are no plans to put it into production yet. We’re taking it upon ourselves to send daily emails to Lucid Design to start their Kickstarter campaign already. We think you should do the same.

How sweet do you think the Kit Bike is? Let us know in the comments below!

Lex Monson
Alexis is the co-founder of Punkpost, the app that lets you send handwritten cards (yes, handwritten by a real human) in the amount of time it takes you to send a text message. The exclusive card collections are created by a community of artists and designers and hand letter pressed on high-quality cotton paper. Get the full experience by downloading the app from the iTunes Store.
Bike
Tech
Bike Cycling