These 12 Recipes Prove Vegans Do Pizza Just As Well 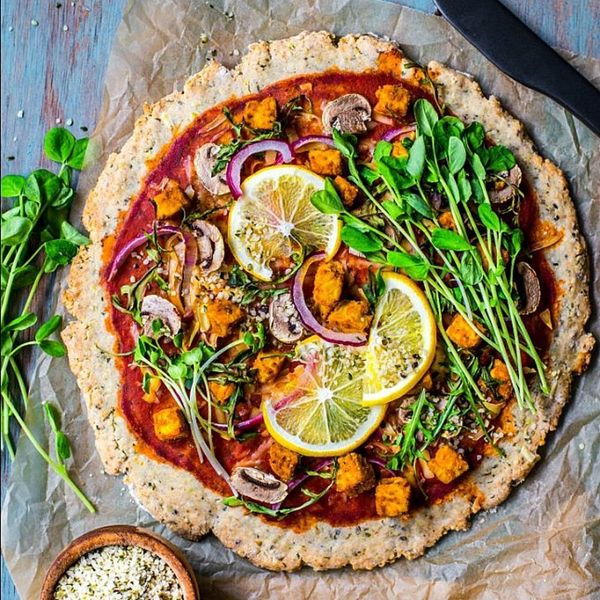 Smothered in tangy sauce, stretchy mozzarella, and your fave proteins and veggies, pizza is impossible to pass up. Even in the vegan world! Though dairy and meats are made out to be staple toppings, vegans have come up with inventive ways to bake up phenomenal pizzas with simple and fresh ingredients, plant-based proteins, and non-dairy cheese. Honestly speaking, these 12 recipes could charm even the most loyal of pepperoni lovers.

If you don’t have time to whip up a crust, smear some cashew sauce onto a crispy tortilla and top it off with a mountain of greens including zucchini, peas, and creamy avocado. (via Green Evi)

This glorious from-scratch pizza is made, baked, and ready to eat in just 45 minutes! The crust is made with wholesome hemp seeds, then smothered with tomato sauce, tempeh, dairy-free cheese, and fresh veggies. (via Wholesome Patisserie)

Adorned with a myriad of zucchini, pine nuts, peppers, tomatoes, and capers, this ‘za snubs tomato sauce to prove that pesto is the best-o. (via Lazy Cat Kitchen)

Pesto and vegan goat cheese get along swimmingly in this recipe, but this pie is made complete with the addition of tangy sun-dried tomatoes, meaty mushrooms, and briny pickled peppers. (via Parsley Vegan)

If your heart belongs to a simple Caprese-style pizza boasting fresh basil and juicy tomatoes, this has your name on it; the pillowy cashew mozzarella will blow your vegan mind. (via Blissful Basil)

This masterpiece of a pizza pie brings a mouthwatering green pea pesto to a broccoli-based crust. (via Rise Shine Cook)

If you thought pizza needed cheese, think again — this crispy flatbread crust is topped with sauce and so many tasty vegetables, you won’t even miss the mozza. (via The Whinery)

This sweet potato crust is covered in a creamy vegan bechamel, peppery arugula, tomatoes, and soy chorizo for the ultimate treat. (via Food Fitness Fresh Air)

You certainly don’t need meat for BBQ goodness, and this recipe proves it by slathering the crust with a lip-smackin’ BBQ sauce and decorating it with tender roasted cauliflower and onions. (via This Savory Vegan)

This beauty of a recipe brings all of our fave Mediterranean flavors together on a GF falafel crust. It’s healthy, tasty, and will easily become a regular on your plate. (via Catching Seeds)

Tomatoes, fresh basil, nourishing kale, and eggplant bring wholesome flavors and a punch of nutrition to this pie. With a drizzle of extra virgin olive oil and a pinch of sea salt, you won’t even notice the absence of cheese. (via Starting With Plants)

Hearts of palm make an appearance in this recipe, along with tender artichoke hearts, briny olives, roasted peppers, tomatoes, and yummy soy cheese. (via Sincerely Katerina)
From Your Site Articles
Dana Sandonato
Born in Canada and now living in the beautiful state of North Carolina, Dana is a coffee-reliant food writer with a healthy appetite, a taste for culinary adventure, a thirst for good beers, and an endless hunger for food photography. When not writing for Brit + Co, she can be found pouring herself into her blog-turned-webzine, Killing Thyme, or taste-testing at local breweries with her husband. Dana's ideal down time includes pizza, marathoning on Netflix, or watching her fave flicks from the 80s and 90s - no matter how great or awful they are!
Dinner Recipes
Healthy Eating
Dinner Recipes Healthy Recipes recipe roundup Vegan Recipes
The Conversation
Reviews:
More From Healthy Eating