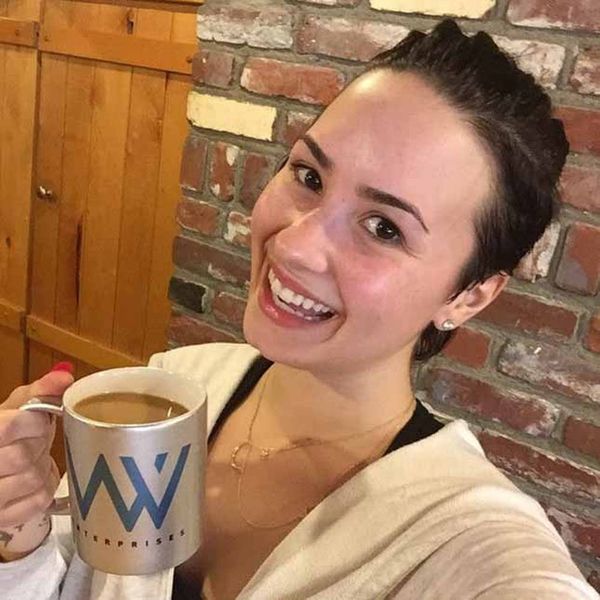 We’ve had a pretty glamorous week talking about red carpet fashion and showing you how to rock the hottest Oscars beauty looks and trends IRL. We’ve been pinning pics of stars’ lipstick looks and carefully-sculpted updos, but now it’s time to see them in a different light — without makeup. We know you’ve gotten used to seeing Blake and Bey all dolled up this week, but let’s remember that these celebrities are just like us — they put on their mascara one lash at a time every AM. Here are some famous faces showing their real selves in a slew of #NoMakeup selfies that will remind you that, yeah, no one woke up like dis.

1. Blake Lively: Dear Blake, even though you’re a new mom you look gorgeous with or without makeup. XOXO, Gossip Girl. (via @blakelively)

2. Beyoncé: Queen Bey and her girl Blue #WokeUpLikeThis and are apparently just as sweet without makeup, as they’ve got the entire BeyHive checking up on ’em. (via @beyonce)

3. Lady Gaga: Besides that heart-shaped rock, the newly engaged singer has a lot to be happy about, because she looks gorgeous au naturel. (via @ladygaga)

4. Miley Cyrus: Just like the singer herself, the beauty of that fresh face just can’t be tamed. (via @mileycyrus)

5. Ellen DeGeneres + Portia de Rossi: The only thing better than a beach stroll with your gal is the confidence to go makeup free for a selfie. Go ladies! (via @portiaderossi)

7. Chrissy Teigen + John Legend: While they may not have makeup on, fingers crossed the cute couple at least covered up with some sunscreen on the beach. SPF 4 Lyfe, guys! (via @chrissyteigen)

8. Britney Spears: Oops! Britney went to the coffee shop again without any makeup. Keep rocking the fresh face, B — just hope you remember footwear this time. (via @britneyspears)

9. Lorde: Even without makeup, the singer looks like a royal. (via @lordemusic)

11. Lena Dunham: The actress-writer-producer knows it’s always best hanging with your girls with no makeup on. (via @lenadunham)

12. Demi Lovato: I think we had a heart attack from Demi’s natural beauty. She’s made the makeup free selfie a tradition with her weekly #nomakeupmonday posts. (via @ddlovato)

13. Jessica Alba: Let’s be honest, the actress looks like a total babe chilling with no makeup on. (via @jessicaalba)

14. Solange: Beyoncé isn’t the only one in the Knowles clan looking ***flawless without makeup. (via @saintrecords)

15. Gisele Bündchen: Now we get why they’re called supermodels. Because they look pretty perfect lounging around the house sans eyeliner, lipstick, foundation, etc. (via @giseleofficial)

17. Adriana Lima: Though the model is trying to be coy with her makeup-free face, we’re pretty sure she has nothing to hide but even more natural beauty. (via @adrianalima)

18. Zoë Saldana: The new mom of twins looks like a natural in the kitchen — totally gorgeous. (via @zoesaldana)

19. Lea Michele: We’re not sure who’s cuter, the Glee actress going sans-liner for her selfies or the cat cuddling in her bed. (via @msleamichele)

20. Hilary Duff: Apparently the singer-actress came clean, and we’re not complaining. Let the rain fall down and show us some skin more often, Hil. (via @hilaryduff)

21. Gina Rodriguez: The Jane the Virgin star proves you don’t need to spend time in the makeup chair to give us some gorgeous ‘gram time. (via @hereisgina)

22. Lana Del Rey: We’re letting some false lashes and a little bit of lip gloss pass for this usually made-up singer. (via @lanadelrey)

23. Ciara: The only thing more perfect than a makeup-free shot is one with an adorable baby. You win, Ciara. (via @ciara)

: Not only did the singer lose the “$,” but she also got rid of the glitter and excessive makeup, and we’re into it. (via

25. Oprah: The media mogul has a bounty of veggies in her garden, all while looking as fresh as those greens. (via @oprah)

27. Jordin Sparks: We love a girl with curls. (via @jordinsparks)

28. Lo Bosworth: Lo literally woke up like this. And she looks like she just got back from the beach. (via @lobosworth)

29. Kelly Rowland: She’s got her soldier on her chest and no makeup on her face. Kelly is definitely destiny’s child. (via @kellyrowland)

30. Kylie Jenner: The luscious lipped lady proved they’re all hers with this subtle selfie look. (via @kyliejenner)

31. Whitney Port: We’re curious if she’s wandering the city or ready to hit the slopes in this bundled up, natural look ;) (via @whitneyeveport)

32. Danielle Brooks: Clearly the OITNB actress is over *something*, but we’re not over her beauty. (via @daniebb3)

33. Chloe Grace Moretz: Bored + taking a selfie. See, celebs are actually just like us! (via @chloegmoretz)