Miley Cyrus Put an Empowering, Feminist Spin on ‘Santa Baby’ and We’re Here for It 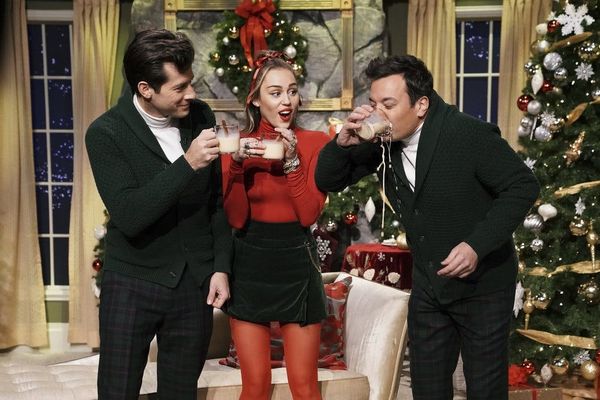 As the debate about the problematic lyrics in the classic Christmas song “Baby It’s Cold Outside” rages on, Miley Cyrus has taken it upon herself to update the lyrics of another questionable tune, performing an empowering version of “Santa Baby” on Jimmy Fallon’s Tonight Show.

“I think I might need to change a few of these lyrics,” Cyrus told Fallon just before they took the stage for a performance of the song on Thursday, December 20.

The narrator in the 1953 song famously tells Santa she’ll wait up for him if he brings her the gifts on her list. But Cyrus didn’t like the implications of that. “Am I saying I’m gonna hook up with Santa if he buys me all this stuff?” the “Malibu” singer asked, also pointing out that the song makes references to wearing fur, which goes against her values as a proud vegan and animal rights advocate.

Fallon agreed, but nonetheless acted surprised when Cyrus opened the song by telling Santa that she didn’t want his gifts and instead had something else in mind. “Don’t want diamonds, cash, or stuff,” she sang. “Nothing that comes in a box. No more fluff. I’ve had enough. And I can buy my own damn stuff.”

Cyrus, joined by Mark Ronson, with whom she just released a new single, went on to proudly point out that she drives a “baller car” that she bought for herself. The only thing she wanted from Santa? Equality. “Listen, Santa, to what I say. A girl’s best friend is equal pay,” she sang. “Stop interrupting me when I talk. And don’t text me pictures of your…” (Cue Ronson’s ringing cell phone.)

“Santa baby, I’d love to know my ass won’t get grabbed at work by some ignorant jerk,” she sang, finishing her empowering rendition with her final Christmas wish. “Tell the dirtbags to put away their chimneys tonight.”

What do you think of Miley’s new “Santa Baby” lyrics? Let us know @BritandCo!