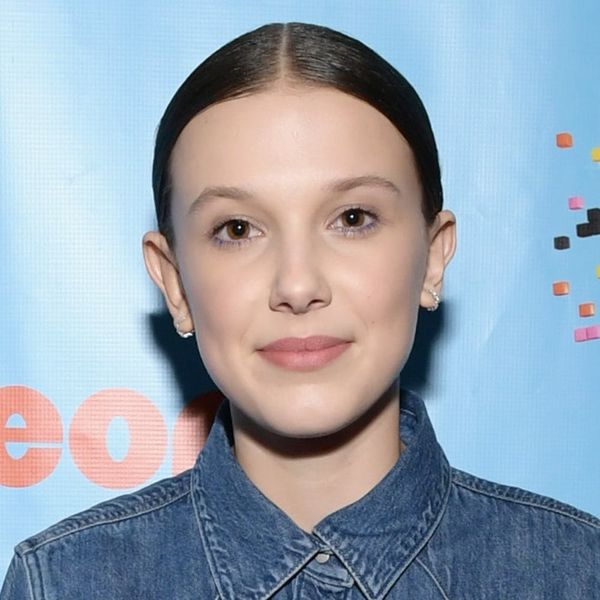 Unless you happen to be Britney Spears and Justin Timberlake, rocking head-to-toe denim on the red carpet is a tricky feat. Stranger Things star Mille Bobby Brown managed to pull it off effortlessly at last night’s 2018 Kids’ Choice Awards however, adding in a hidden surprise to her Canadian tuxedo that took things next level.

Not only did the Calvin Klein By Appointment spokesmodel flawlessly match her CK jeans with her dark blue shirt, she paid homage to the political climate, giving a nod to yesterday’s March for Our Lives with a pocket embellishment which read, “Never Again.”

But that wasn’t all. When the teen star turned around, she revealed the names of each and every one of the 17 Parkland shooting victims at Marjory Stoneman Douglas High School, all of which were listed on her shirt beneath the march’s name.

The RL Eleven also spoke to the day’s happenings while accepting her award for Favorite TV Actress, saying, “… The March for Our Lives demonstrations that took place all over the world today have inspired me and impacted us all in one way or another… I’m privileged to have a voice that can be heard, one that I can use to hopefully make a positive difference and influence change.”

What do you think of Brown’s politically-motivated look? Share over @BritandCo.

Nicole Briese
Nicole is the weekend editor for Brit + Co who loves bringing you all the latest buzz. When she's not busy typing away into the wee hours, you can usually find her canoodling with her fur babies, rooting around in a bookstore, or rocking out at a concert of some sort (Guns N' Roses forever!). Check out all her latest musings and past work at nicolebjean.com.
Celebrities
Red Carpet
Celebrities Celebrity Style Denim Red Carpet
More From Red Carpet