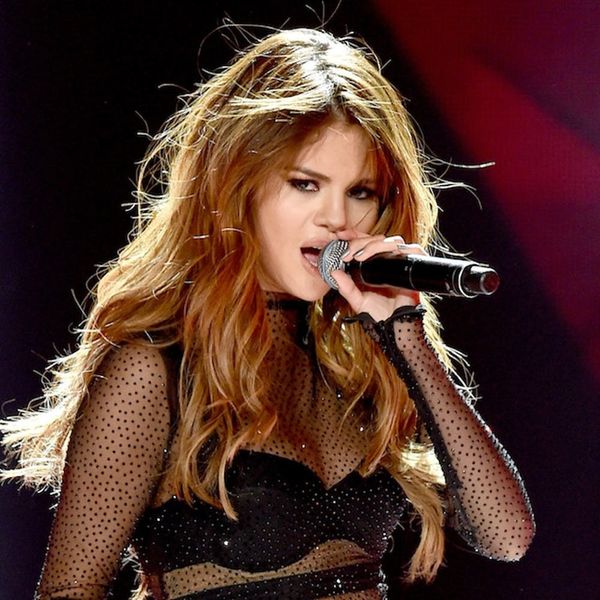 1. This love triangle is too good to look away from. After analyzing the previous tiny snippet we heard of Selena’s single, we were sure she might be singing about her ex, Justin Bieber. “Somewhere along the lines/We stopped seeing eye to eye/You were staying out all night/And I had enough,” she sings in one part, and the rest of the lyrics don’t stray far from this sentiment. The Weeknd also just dropped a new song that seemed to be throwing some shade Bieber’s way, and Bieber seems to have rejoined Instagram just to throw subtle digs at the couple. Now, all that aside: The new Selena song is one of her best and most mature sounding songs to date, with a chopped-up chorus from producer Kygo that you might as well get used to know because you’re gonna be hearing this ALL over the radio. Welcome back, Selena!

2. Lena Dunham defended Taylor Swift’s silence about the election, saying “people are nuts.” Taylor Swift took a lot of heat during and after the election, with people wondering why she wasn’t speaking up in support of Hillary Clinton, given Tay’s stance on female empowerment — and her massive influence on young voters. When Lena was asked by Rolling Stone if the criticism was unfair, she said, “I just think everyone has to do it their way. When I was lesser known, I was like, ‘Who could not share their opinion?’ Then I found out that when you talk about politics, people straight up tweet you the floor plan of your house and say they’re coming to your house. You have to fucking watch it because people are nuts.” (Photo via Christopher Polk/Getty)

3. Heidi Montag congratulates her former Hills co-stars on their pregnancies and reveals baby plans of her own. Lauren Conrad’s friendship with Heidi Montag might have went south on the Hills, but Heidi has since expressed no hard feelings and that she still hurts over how things ended. She’s doubled down on that sentiment in a video on Faithwire’s YouTube channel, wishing both Lauren and Whitney Port “a huge congratulations” on their pregnancies, saying they were both going to be amazing moms. She also revealed that her and husband Spencer Pratt have family plans of their own, and that while she’s eager to have kids, she can’t compare her life to others (too true, Heidi!). “It stirs up excitement with what’s going to be coming up in my life hopefully soon too,” she says. “It hasn’t been the right timing for me. So I think in life it’s important for us to pray and prioritize God’s timing in our lives and not compare [our life] to other people’s.”

4. Holy crap: Starbucks is releasing their version of ice cream coffee floats at certain locations. Yes, you read that right! Starbucks will start serving affogatos (that’s basically a shot of espresso over ice cream) at 10 of their more upscale Reserve bars in Los Angeles, Boston, Washington, DC and more. While the initial roll out is limited, it’s still a sign that these treats might be available more widely eventually. You can check out the full location list and Affogato menu at Thrillist. (Photo via Starbucks)

5. Paid puppy leave is a now a thing at this company. Getting a new pet is a ton of work, and a brewery in the UK is now offering paid puppy leave for new dog owners to make the transition a little easier. BrewDog’s Puppy Parental Leave also enables staff to bring their pets to work after the paid leave has finished. “We always want to raise the bar when it comes to offering our staff the best possible benefits,” BrewDog co-founder James Watt said, according to Metro. “At BrewDog we care about two things above all else. People and beer.” Um… what about puppies!?

6. Quote of the day: “My sexual orientation is up for grabs, I guess you could say.” Susan Sarandon gets candid about her sexuality and its openness in a new interview with Pride Source about Feud.

Would paid puppy leave encourage you to get a pet? Let us know over @BritandCo!