Not Yo Cheese: 24 Nacho Recipes You Won’t Want to Share 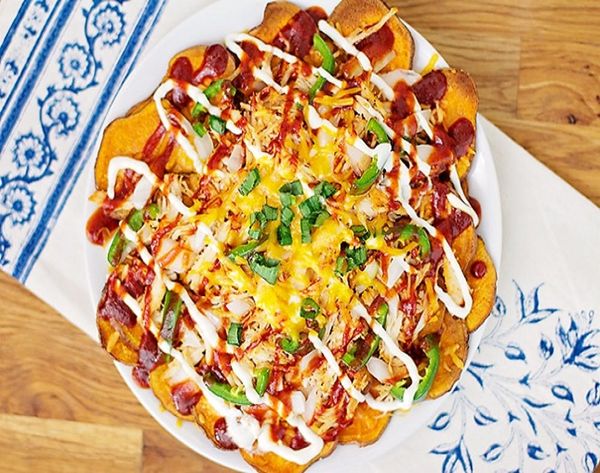 Snacking — we can’t, we won’t ever quit it. And one of the best ways to satisfy any snackage mood is cheese. You can never go wrong with a classic grilled cheese or the comfort of homemade mac and cheese, but those two pale in comparison when placed next to the almighty nacho. Whether you’re prepping for a party or looking to get your snack on, here are 24 creative nacho recipes you won’t want to share. (But if we’re coming over, you better.)

1. Sweet Potato and Carrot Nachos: Sweet potato fries are the bomb. So we know you’re going to be down with a nacho version that is packing carrots and kale. All your arguments that nachos are a well balanced meal finally have a leg to stand on. (via The Cookie Writer)

2. Loaded BBQ Chicken Nugget Nachos: You put BBQ sauce on everything — wings, brisket, Lucky Charms — so why not put it on chicken-nugget-laden nachos? Topped with tomatoes, corn and avocado, this dish is a crowd pleaser and can be made vegan and gluten-free, too. (via Averie Cooks)

3. Seven-Layer Nacho Waffles: Holy crap, you guys. Someone figured out a way to eat nachos for breakfast. See ya later, oatmeal. It’s like we never knew ya. (via Scarletta Bakes)

4. Grilled Shrimp and Pepper Jack Cheese Nachos: Grilled shrimp on a bed of jalapeños, pepper jack cheese and tortilla chips is a winner in our book. (via Barbells and Bellinis)

5. S’mores Nachos: Chips and salsa don’t have a monopoly on the dish. With only four ingredients and 10 minutes, these s’mores nachos come together to create the perfect late-night dessert. (via Eazy Peazy Mealz)

6. Loaded Goldfish Nachos: Throwback! Goldfish crackers are swimming through an ocean of ground beef and guacamole. We don’t know about you, but we’re reaching for our fishing poles. Right. Now. (via Family Fresh Cooking)

7. Chicken Cashew Coriander Nachos: Here’s something you already know: Preparing and making dinner takes time and energy. And those late nights at the office just ain’t vibing with your Juilia Child dreams. These nachos will definitely NOT make you feel like Jules, but they will fill your stomach and taste oh-so-so good. (via The Hungry Babushka)

8. Totchos Supreme Burgers: Totchos, are they better than nachos? While the debate rages on, we’ll be stuffing our faces with bacon and chipotle totchos atop an all-beef patty. (via Half Baked Harvest)

9. Baked Sweet Potato Chips: The sweet potato is calling our name… again. And we’re definitely answering. Give these little chips some love in the oven, pour a blue cheese sauce over them and serve with bacon and green onions. (via Cooking For Keeps)

10. Sweet and Spicy BBQ Chicken Nachos: We’ve turned to our good friend, BBQ sauce, again. But, this time, we’re switching it up and using Sweet and Spicy BBQ SunChips. I know, crazy, right? Top these yummy chips with chicken, sour cream and cheddar cheese for a twist the kids (ahem, and adults) will enjoy. (via Let’s Dish)

11. Buffalo Chicken Waffle Fries: Football season is upon us and waffle fries are sure to score a touchdown with your friends when they’re smothered in a generous helping of buffalo chicken, mozzarella, ranch and chives. (via Buns in My Oven)

12. Apple Nachos: Since an apple a day keeps the doctor away, it’s totally fine to make this a daily ritual. This sweet and savory recipe plays up the apple with a drizzle of peanut butter and a handful of chocolate chips. (via Trial + Eater)

13. Nacho Hot Dogs: This reigns supreme as the top dog. Snuggled in a warm and toasty bun, this dog is loaded with sour cream, tortilla chips, avocado and lime. It’s like your two favorite baseball snacks just had a baby — a delicious bundle of joy. (via Diethood)

14. Sweet Potato BBQ Nachos: We now introduce the perfect combo of sweet potato and BBQ. Just when you thought the sweet potato/BBQ craze was over, we’re bringing in chicken, jalapeños, onion and cheese to take them over the top. (via B. Britnell)

16. The Best Damn Vegan Nachos: Vegans, we got your back. These are the best damn vegan nachos you’ll ever eat, thanks to cashew-less vegan queso. (via Minimalist Baker)

17. Buffalo Chickpea Nachos: This recipe is a shoe-in for the Nacho Hall of Fame. Made with chickpeas, ranch and cheese sauce, veggies and chips, this creative dish is bound to knock other nachos out of the ballpark. (via Vegan Yack Attack)

18. Chocolate Pretzel Nachos: Love chocolate-covered pretzels? There’s a nacho for that. And it’s packing everything from pretzel crisps and chocolate chips to fudge sauce and sprinkles. It’s like a dessert nacho bowl gone wild. (via Gimme Some Oven)

19. Mediterranean Nachos: As much as we’d love to hop on a plane to Greece or Turkey right now, these Mediterranean nachos will just have to do for the time being. No matter if you’re into tofu feta, roasted red bell pepper hummus or original hummus — this recipe will help you make a healthier version of the typically not-so-diet-friendly dish. (via Keepin’ It Kind)

20. Spicy Shredded Chipotle Chicken: When we’d rather not head to Chipotle for a second chicken bowl this week, these spicy chipotle chicken chips will hit the spot. Shred chicken pieces, then add it to black beans, corn and chips for a filling and yummy meal. (via Pinch of Yum)

21. Dessert Nachos With Salsa: There can never be enough dessert nachos in the world. This time they’re accompanied by a sweet blend of strawberry, mango and avocado salsa. (via Foodie Crush)

22. Healthy Grilled Sweet Potato Nachos: This dish is packed with veggies and full of bright colors. It’s not only great to eat, but also beautiful to look at. (via Pinch of Yum)

23. Wild Nachos: What has sugar, spice and everything nice? These bad boys. Cinnamon sugar chips keep the snacking sweet. (via Oh, Sweet Basil)

24. Nachos With All The Fixings: Beer, beef and beans. Throw in some tortilla chips, cilantro and pico de gallo and you’ve got a treat that eats like a meal and feeds a crowd. (via Bon Appetit)

Which nachos do you want to snack on? Let us know in the comments below!

Nicole Mangona
During the day, Nicole makes authors' dreams come true through her work at a publishing house. At night, she can be found sweating through a Blogilates video or delving into another Agatha Christie novel. Her work is an accurate representation of herself: creative, genuine, and purposeful.
Savory
Recipes
Savory
The Conversation
Reviews:
More From Recipes