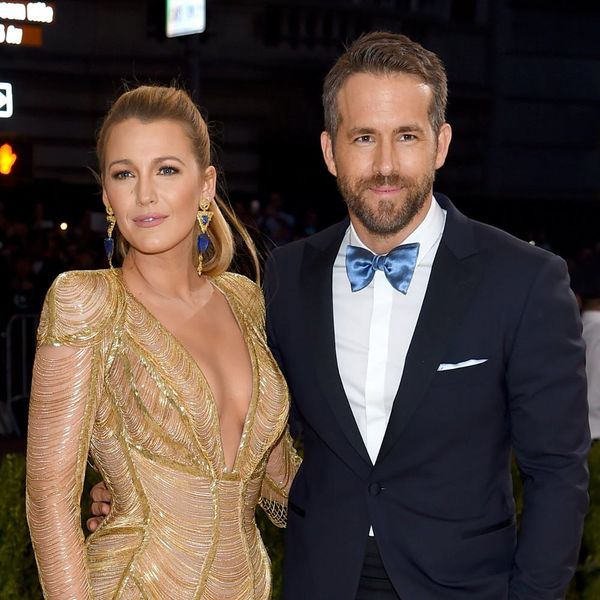 Ryan Reynolds and Blake Lively may have stunned fans at last night’s Met Gala with their amazing style, but while we were focused on the glitz and glam of the epic annual event, Reynolds took a moment to reveal to Humans of New York just one of the ways that Lively has changed his life for the better. He admits things haven’t always been easy, especially when dealing with his troubled relationship with his dad and his father’s eventual passing.

The two have now been married for five years and are the proud parents to two little girls, and Reynolds has admitted in the past that his wife not only helps him manage his anxiety, but “She really does show me how to be better in almost every way. As a father, a person, everything.” And that also includes how to deal with the heartbreaking moments in life.

Popping up on Humans of New York’s Instagram account last night, the pair both flashed adorable grins while posing cheek-to-cheek. While the snap totally reminds us of how much we love their love, it’s what the 40-year-old actor had to say that reveals how much these two have done for each other. “She always responds with empathy. She meets anger with empathy. She meets hate with empathy,” Reynolds began, adding, “She’ll take the time to imagine what happened to a person when they were five or six years old. And she’s made me a more empathetic person.”

We so often see the cheekier side of these two that it’s easy to forget that behind closed doors, they deal with their own personal struggles just like the rest of us. Thankfully for Ryan Reynolds, he has Blake Lively by his side.

Are you surprised by Ryan Reynolds’ personal admission when it comes to how Blake Lively has helped him? Let us know @BritandCo!

Desiree O
Desirée O is a ‘Professional Bohemian’ who loves anything and everything related to the arts, entertainment, and pop culture. She ADORES being a ‘Newsy’ for Brit + Co, covering all of the latest tidbits of awesomeness that you want to read about. When she’s not writing, she’s either making messy art, going on long adventurous walks with her camera, or poking around over at bohemianizm (http://www.bohemianizm.com/). You can find out about Desirée O and her work at http://DesireeO.com/ or follow her on Twitter @DesireeO.
Blake Lively
Celebrity News
Blake Lively Met Gala
More From Celebrity News