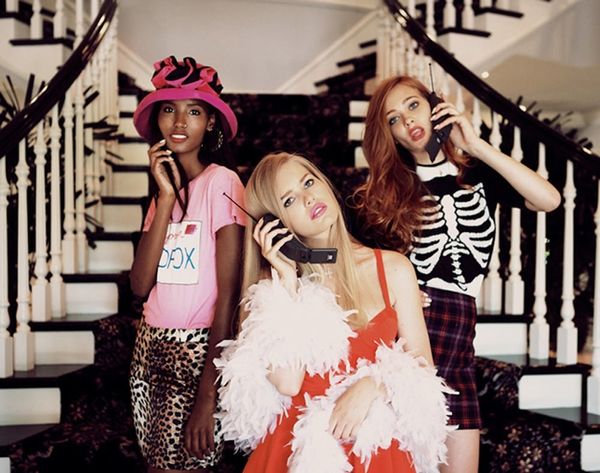 We know Halloween isn’t exactly around the corner, but it’s never too early to start planning your killer costume. Let the final days of August inspire your getup, and by that we mean back to school. These 24 creative ideas are inspired by the cool school settings from our favorite movies and TV shows. So right after you buy a new pair of jeans, snag a new pair of kicks and DIY your notebooks, Pin and bookmark these ideas to get extra credit on your A+ group and couple costumes.

1. The Plastics: What might be the most quoted movie of our time (“Is butter a carb?”), Mean Girls has some of the most fetch Halloween costume inspo, ever. From Pink Wednesdays to the “Jingle Bell Rock” looks, there are a ton of possibilities to recreate this iconic girl clique. Let your favorite scene design your duds! (via Soulfire Photography)

2. Clueless: As our favorite popular high school girls on the silver screen, Cher, Dionne and Tai make a fantastic group costume for you and two of your BFFs. (via Wildfox)

3. Serena + Blair: It would be pretty tough to copy Blair Waldorf and Serena van der Woodsen’s actual looks from the hit show Gossip Girl (we mean, they wear Oscar de la Renta and Chanel to high school), but you can still channel these Upper East Side school girls with some classic accessories — pearls and a headband for B and a short skirt and loose tie for S. (via People)

4. Cast of MTV’s Awkward: To say that Jenna Hamilton’s teenage life is awkward would be an understatement. To mimic her look and still be recognizable, you need to recreate that infamous cast. (via MTV)

5. Ashley Spinelli: Remember Ashley Spinelli from the kiddy cartoon Recess? That chick was the coolest tomboy on the playground. To copy her style, a leather moto jacket, striped tights and an orange beanie are key. Oh, and the pigtails. (via Costume Works)

6. Laney Boggs: Our favorite makeover story takes center stage for this She’s All That couples costume. Grab a friend so that one can go as the “before” and the other can go as the “after.” (via Popsugar)

7. Superbad Seth: Steal some style tips from Jonah Hill’s hilarious character in Superbad by wearing a navy western shirt and khakis. Then, just carry around some Tide. (via Buzzfeed)

8. Brenda, Kelly, Donna and Andrea: The girls from the original Beverly Hills, 90210 are a seriously cool way to go ’90s with your besties for Halloween. Heck, why wait ’til October!? You could totally rock some of these looks at the office. (via Who What Wear)

9. Cast of Ja’mie: Private School Girl: If you didn’t have the pleasure of catching Chris Lilley’s Australian comedy series on HBO, drop everything and HBOGo it stat. After you literally ROFL, you’ll be searching for school blazers, striped shirt dresses and Mary Janes immediately. (via Big Pond Movies)

10. Edward Cullen + Jane: This isn’t your typical Twilight couples costume. Sure, you could go for the obvious Edward and Bella, but why not go to the dark side and go as Edward and Jane? Not only do you get to rock a killer cat eye, but you also get to wear a cape! (via The Pin Junkie)

11. Cast of Ferris Bueller’s Day Off: You guys. This group costume is too good for words. Whether you’re looking for a couples costume, a besties costume or a group getup, this legendary ’80s movie has fantastic options (and gives you a perfectly good excuse to play hooky). (via Pinterest + Ten:Thirteen Design)

12. Cast of Pretty Little Liars: Got a secret; can you keep it? This beautiful group of high schoolers is made up of four best friends with very different styles. For the most recognizable look, opt for a classic LBD — but don’t forget to rough yourself up with some dirt (or face paint). (via Seventeen)

13. Darla Marks: A “Seniors” tee or sweatshirt, plaid shorts and some knee-high tube socks will make you a dead ringer for Dazed and Confused‘s Queen Bee. (via Found Item Clothing)

14. Cast of Napoleon Dynamite: Dressing as the most awkward high school character ever created is pretty easy and sure to get lots of laughs. Large glasses, unflattering jeans, a “vote for Pedro” tee and an afro are all necessities. Bonus points if you can get your friends to come as Deb, Kip and Pedro. Double bonus points if you can learn the dance. (via Costume Works)

15. Cast of Glee: Whether you’re a fan of Sue Sylvester and the Cheerios, Mr. Schu and New Directions, Coach Beiste and the football team or the Dalton Academy Warblers, there are tons of great costume ideas floating through the halls of William McKinley. (via Toynk)

16. Heather Chandler, McNamara and Duke: Rule the school by dressing as the colorful clique from ’80s cult classic Heathers. (via Found Item Clothing)

17. Paulie Bleaker + Juno: This Juno couples costume is one of our faves, because it’s so easy to do and so recognizable. And, if you’re actually a mama-to-be, this is a great way for you and your baby bump to join in on the Halloween fun. (via Baby Gaga)

18. Enid + Rebecca: These two high school outcasts from Ghost World would be a blast to dress up as. With the exception of the raptor tee (which was homemade, btw), the looks would be quite easy to recreate. (via Flickr)

19. Barden Bellas: If you’ve got a group of girls, go as the acca-awesome gals from Pitch Perfect before they got their cool makeover from Beca. Just be prepared to sing, because you know someone’s going to ask you. (via Coolest Homemade Costumes)

20. Cast of The Breakfast Club: This unlikely crew of five is one of the most celebrated high school groups in movie history. A few key accessories and some ’80s outfits will make this one a cinch. (via ELJ All Arts Annex)

21. Sandy + Danny: This stellar couples costume from Grease gives us chills (they’re multiplyin’). While we’re loving the sexy version of Sandy, you could also channel Sandra Dee with a ’50s poodle skirt and tennis shoes. (via Halloween Costumes)

22. Torrance Shipman: If you’re thinking about being a cheerleader for Halloween, consider going as the champion-winning squad captain of the Toros (T-T-T-Torrance) from Bring It On. No one will see it coming and the quotes will be flying (“Awesome, oh wow! Like, totally freak me out! I mean, right on!”). (via My Party Shirt)

23. Kelly Kapowski + Zack Morris: The cutest duo of the ’90s? Kelly and Zack, duh! Combine your love for early ’90s fashion and your love for the teen sitcom, Saved by the Bell into one rad couples costume. (via Ian Brooks)

24. Olive: We’ve got mad love for the sassy high schooler from Easy A. The costume is one of the easiest yet. Just grab your Wayfarers, a pearl necklace and a black corset (and don’t forget the “A” patch). (via IMG Arcade)

Are any of these school-goers sparking your costume creativity? Talk to us in the comments below!

From Your Site Articles
Rachel Sumner
Rachel is a Contributing Editor at Brit + Co and the founding editor of lifestyle blog, SADIERAE + CO. While her background is in fashion and styling, she also loves all things creative, cooking, traveling, binge-watching TV shows and giving piggy back rides to her golden retriever, Louie.
Halloween
Halloween Costumes
Halloween Halloween Costumes