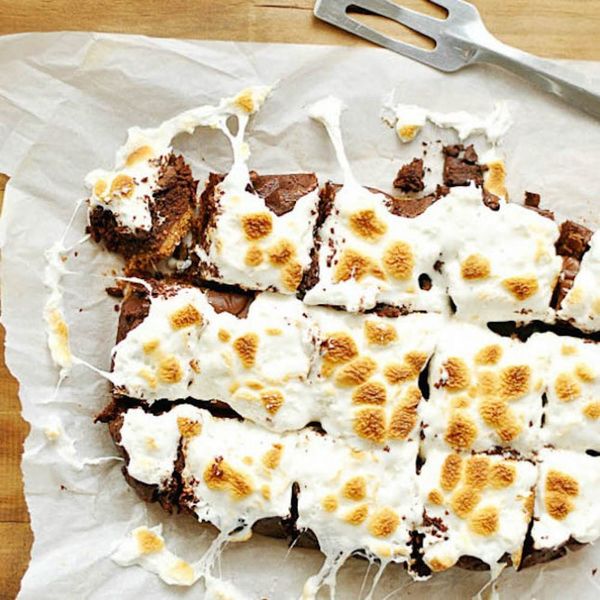 When you think of the times you’ve gotten the most use out of your crockpot, it was probably in the form of dead-of-winter slow cooker soup recipes, right? Well, we’re here to tell you that your favorite set-and-forget appliance should *not* be neglected in the summer (grills shouldn’t get to have all the fun). You can make everything from gooey s’mores bars for camping or a New England style crab boil to celebrate the Fourth of July — and way, way more. Scroll down for 16 slow cooker recipes that were made for summer cooking.

1. Slow Cooker Poached Salmon With Lemons & Fresh Herbs: Basic poached salmon is a great summer staple to keep in your fridge. With it, you can make salads or sandwiches, or even serve it as-is with a simple sauce. It takes under an hour with your slow cooker on low, so be prepared to start checking it after 45 minutes. (via The Kitchen)

2. Crock Pot Chicken Caesar Wraps: When the weather is beautiful, the last thing you want to do is slave over a hot stove making lunch. These Caesar wraps serve 6-8 people, and you can play outside in the sun while they cook. (via Life in the Lofthouse)

3. Crock Pot Low Country Boil: Crab boils are a summer tradition many people look forward to. The whole process can be a bit cumbersome — unless you do the whole thing in a crock pot. Plus, this low and slow method infuses even more flavor (like beer!) into the ingredients. (via Family Fresh Meals)

4. Skinny Buffalo Meatballs: Buffalo anything is always a crowd-pleasing dish, no matter what time of year it is. This skinny version of buffalo meatballs is particularly good for the summer, when they’re best served in lettuce wraps. (via The Skinny Fork)

5. Crock Pot Healthy Nachos: These nachos are loaded with juicy chicken, cheese, beans, avocado and whatever other toppings you like. The chicken and beans are slow cooked for five or six hours on low, so you get that deep flavor offset by the freshness of the veggies. (via Well Plated)

6. Slow Cooker Jalapeño Popper Chicken Taquitos: These perfectly rolled cigars filled with chicken, cream cheese and jalapeño are a show-stopping party appetizer. Because the filling is made in the slow cooker, the hands-on time is greatly reduced, which means more time for you to mingle at the party. (via Creme de la Crumb)

7. Slow Cooker S’mores Brownies: It’s just not summer until you’ve had your first s’more of the season. Shy away from the messy marshmallow-on-a-stick approach, and let the slow cooker do all the work for you. (via Something Swanky)

8. Slow Cooker Baked Bean Trio With Bacon and Peppers: Three types of beans, two kinds of peppers and almighty bacon come together in the slow cooker to create the most bomb baked beans of all time. Your barbecues will never be the same after you’ve tried this dish. (via Good Life Eats)

9. Slow Cooker Beer Brats: Simmering these brats in your slow cooker for 6-8 hours ensures that all of that wonderful beer permeates the meat. The result is an ultra-juicy brat that’s bursting with flavor. Serve on a pretzel roll with sauerkraut and mustard for an authentic German meal. (via Spicy Southern Kitchen)

10. Slow Cooker Triple Chocolate Brownies: What do you get when you combine three different kinds of chocolate, chopped pecans and a slow cooker? These most decadent brownies you’ve ever had. And you don’t even have to turn on the oven. (via Spicy Southern Kitchen)

11. Slow Cooker Corn on the Cob: You’ll never go back to making corn on the cob the same way after this. It’s as easy as placing the whole cob (husk and all!) into the slow cooker and turning it on. After a couple of hours, the kernels are perfectly tender and ready for munching. All they need is a slab of cilantro butter and a sprinkle of salt to make them perfect. (via The Foodie Affair)

12. Slow Cooker Cornbread Casserole: If sweet, creamy and cheesy are all adjectives that tickle your fancy, then this cornbread casserole is right up your alley. It only takes five minutes of prep work before it’s ready to cook up in the crock pot and become the stuff of cornbread dreams. (via Creole Contessa)

13. Crock Pot Ribs: You don’t have to be a pit master to make addictive ribs at home. The key to making them look authentic (but still keep it easy) is to pop them under the broiler after their eight hours in the crock pot. After just a few minutes, they’ll look like they’ve been in the smoker all day. (via Spicy Southern Kitchen)

14. Slow Cooker Peach Cobbler: Peach cobbler is an essential summer dessert, especially in the South. While fresh Georgia peaches would be amazing here, frozen peaches will do just fine in a pinch. A scoop of ice cream, however, is not optional. (via A Spicy Perspective)

15. Slow Cooker Pulled Pork Tacos: Taco night is quite an affair in the summer. You can take things outside, start a margarita bar and serve these pulled pork tacos that have been simmering away in the slow cooker all day long. You can top your tacos with whatever you like, but cilantro, cotija cheese and red cabbage are all great options. (via The Casual Craftlete)

16. Slow Cooker Stuffed Peppers: Weeknight dinners in the summer can be a pain. Everyone is crazy busy, but you still want to get a delicious and well-balanced meal on the table when possible. This recipe for slow cooker stuffed peppers is great to start before you leave the house, so you’ll come home to a great smelling home and tasty dinner. (via Damn Delicious)

From Your Site Articles
Paige Johnson
Paige is a blogger, food writer and culinary master from Louisville, Ky. She's a newlywed who's obsessed with dogs and renovating her 117 year old home. When she's not working on her blog — My Modern Cookery — you can find her binge watching F.R.I.E.N.D.S with a triple shot latte in-hand.
Crock Pot Recipes
Recipes
Crock Pot Recipes Slow Cooker Recipes
The Conversation
More From Recipes