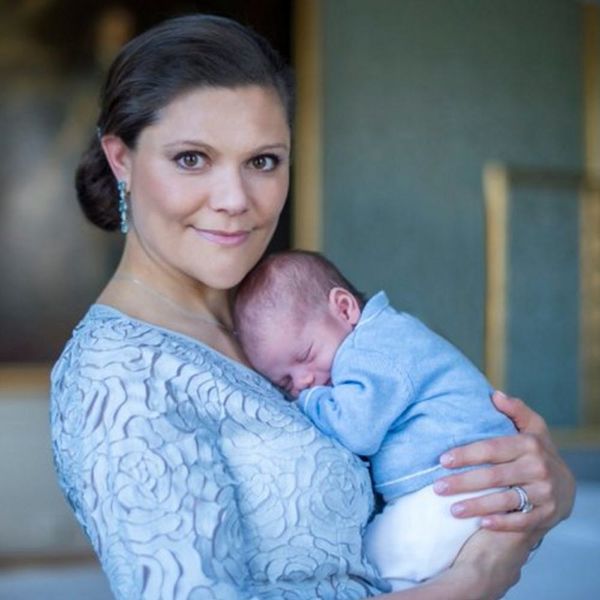 Prince George and Princess Charlotte, we’re thinking you may need to have an international playdate with the royals residing over in Sweden sometime soon. Sweden’s Princess Victoria and her husband Prince Daniel welcomed their second baby on March 2. The newest addition the royal family is named Prince Oscar Carl Olof. The birth was announced that day, but today the family finally offered up a glimpse at the newborn.

The family first went the traditional route, sharing this official photo of Princess Victoria and her son (who is only three-weeks-old and already a Duke BTW) dressed in matching baby blue outfits.

Varmt tack för alla hälsningar, lyckönskningar och gratulationer vi fått i samband med Prinsessan Estelles födelsedag och Prins Oscars födelse. Vi uppskattar all omtanke och att så många delar vår glädje. Kronprinsessan Victoria och Prins Daniel We would like to convey our sincere gratitude for all the kind greetings and congratulations we have received in connection with Princess Estelle's birthday and the birth of Prince Oscar. We genuinely appreciate your kindness and that so many of you share our happiness. Crown Princess Victoria and Prince Daniel Foto: Prins Daniel #kungahuset #kronprinsessparet

They then followed in Kate Middleton’s footsteps by sharing a personal photo Prince Daniel took himself. In this adorable snap, Oscar’s four-year-old sister Princess Estelle is seen snuggling and looking down at her baby bro in a matching outfit. Get these two together with George and Charlotte and we’re 99 percent sure our hearts will simultaneously combust.