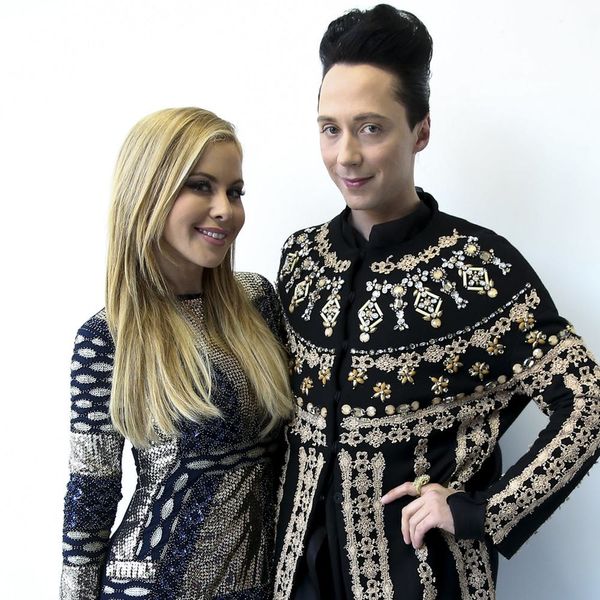 In an interview with Us Weekly, the former Olympic figure skater confessed that she and her co-anchor hauled not one, but *twenty one* suitcases full of clothes to the Korean city. “We never know how many costumes changes [there might be],” she explained, adding that the duo likes to match when possible,”which adds another layer to packing process.”

As for the contents of their trunks, you can bet the 35-year-old packed a lot of clothes from Alice and Olivia and Likely — two brands that she coined her “go-to[s],” along with at least one piece from Dress the Population, which designed a custom dress for her to wear to the ladies final. As for Mr. Weir, we’re guessing he stuffed his bags full of custom jackets from Biyan and Redemption — two brands the former figure skater can’t get enough of, according to Us.

While the duo has been anything but predictable with their clothing choices so far, we *can* offer that they’ll both be wearing gold to the ladies final. Apparently, Weir, a figure-skater-turned-fashion-icon, started the oh-so-fitting (and adorable!) tradition. We can’t wait to see these two (literally) shine!

What do you think of Tara Lipinski and Johnny Weir’s outfits? Let us know @BritandCo!

(All photos by Jean Catuffe/Getty)