11 of the Best Geek Chic Moments from Fashion Week 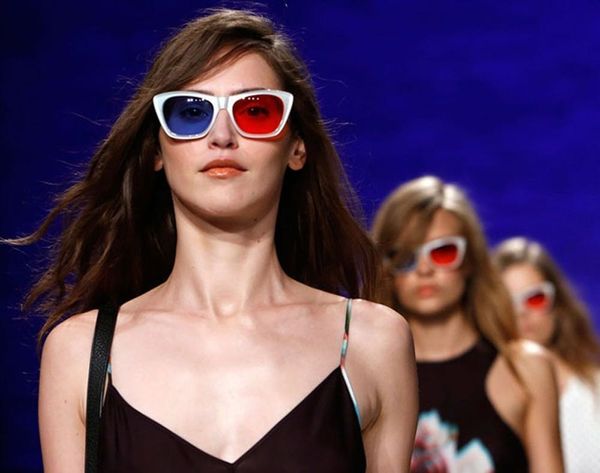 They came, they saw, they looked freaking fabulous. And this year, the fashion set at New York Fashion Week embraced all-things tech like never before. Designers made jaws drop with cutting-edge runway shows — from showing instantly shoppable styles to debuting their lines in 4D; brand-new wearables made their mark, too (in a really, really good way), and all of it was caught as-it-happened on Instagram, Twitter and Vine. We’re still refreshing our feeds for stragglers, but in the meantime, scroll through the moments that made us totally geek out this NYFW.

1. Models Acted Out Emoji IRL: Vogue is #winning on Vine this Fashion Week, sharing some of the most LOL-worthy six seconds ever captured from behind-the-scenes. The mag’s latest must-see moment is this vid of model Vanessa Axente acting out the iconic emoticon, including a coy monkey-see and adorable grin face [actually claps hands, gives thumbs up].

2. CuteCircuit Wants You to Wear LEDs to Work: But not in the all of the lights way that pop stars like Katy Perry and Nicole Scherzinger have done in the past. The brand known for its LED-covered clothes that blink and flash from head-to-toe dimmed its designs for its SS’15 collection, and the office-ready separates that cast only a subtle glow have us dreaming of the day we can move from the boardroom to the cocktail bar in a beaming pantsuit. Future closets, get very, very excited.

3. Rebecca Minkoff Handed Out Old School 3D Glasses: The crowd at Rebecca Minkoff’s show got a special favor as they took their seats: a pair of 3D glasses to wear while her last five looks, made of stereoscopic 3D fabric, walked down the runway. But once the lights dimmed and the front row slipped on their #throwback style specs (yep, they looked exactly like the kind you’d wear at the movies), the effects reportedly fell flat. Maybe next year she’ll upgrade to Oculus (maybe?)

4. Three Wearables Made Their Runway Debuts: This year, there was no question that wearable tech belonged on the runway. Both Opening Ceremony and Rebecca Minkoff debuted bracelet-style wearables, and the gadgets-in-disguise were as chic as we could have ever imagined. With their tech bits masked by studs, metallic chain and luxe gemstones, the pieces finally set the bar for the next wave of want-to-wearables with its effortless fusion of form + function. Folks, the crossover is real.

5. Tommy Hilfiger Assembled His Own High-Tech Paparazzi: How can a pic from the front row of a NYFW show get any more special? Answer: When the snaps are shot with a Lytro, a cutting edge point-and-shoot that lets you manipulate the focus of every photo taken. A slew of style writers were tapped to capture Tommy Hilfiger’s show through the Lytro lens, and the interactive results — posted to the brand’s Twitter account — are pretty cool. A click on the model brings her into focus, and another behind her sharpens the crowd.

6. Runways Became Instantly Shoppable: Fashion girls with a constant case of the need-it-nows, YOU just had the best week ever! That’s because a handful of shows were instantly shoppable via Instagram, and all it took to get the clothes from the runway to your closet was a simple double tap. BCBG and sister brand Hervé Leger pioneered the impulse feature this season — we’re hoping it’s an even hotter trend for FW’15.

7. Monique Lhuillier’s Models Wore Holographic-Style Makeup: Monique Lhuillier had a surprisingly futuristic challenge for her beauty team — to make her models’ eye makeup less romantic and more digital. We have to say, the MAC makeup artists nailed the from-another-planet vibe by using bits of cellophane. How’s that for a runway-inspired #beautyhack?

8. This Bag Moved to the Top of Our 3D Printed Style Wish List: While we were admittedly disappointed in the lack of 3D printed garments + accessories on this season’s catwalks, this one Edun handbag, made with 3D printed hardware, more than made up for it.

9. Ralph Lauren Put on a 4D Runway Spectacular: What does a next-level runway look like? THIS. For what would be his second foray into merging the worlds of fashion and 4D technology, Ralph Lauren projected video of models donning his brand-new Polo Ralph Lauren women’s line onto a cascading waterfall background in lieu of a traditional fashion show. The installation was epic and other-worldly.

10. YSL Made Fashion People Love Google Glass: We never thought we’d see the day when sparks flew between the fashion set and the geekiest tech-cessory around: Google Glass. But it happened when YSL makeup artists used the smart headsets to turn client sessions into video tutorials shot from their POVs. It’s the best use for Glass outside of the tech world *we’ve* seen yet.

11. Rachel Zoe Styles the Most Maj Icon on Instagram: And when you find out who the international sensation is, you’re gonna go bananas. It’s the one and only Barbie, who’ll employ Rachel Zoe’s styling services as she galavants to fashion shows in London, Paris and Milan. Like the fashionista she is, Barbie will of course be posting all of the Rach-approved #OOTDs on her Instagram. Of B, Rachel says, “She was my very first client and just as glam as I remembered ;).”

What tech-y moments had you saying OMG at NYFW? Tell us in the comments below.