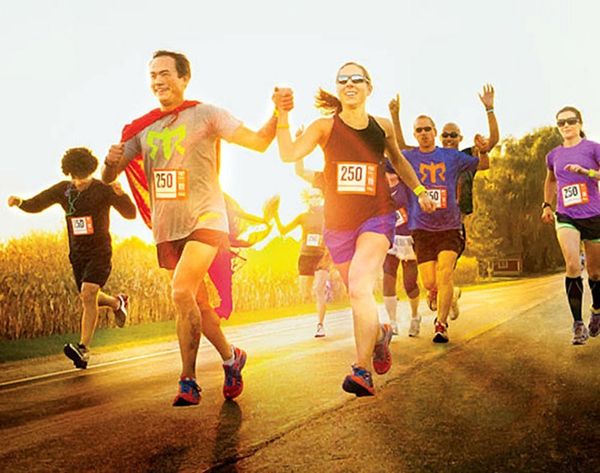 From themed 5Ks to ultramarathons that cross the borders of multiple countries, we’re taking you around the globe in search of your next race. Whether it’s the distance, destination or swag you’re after, we’ve found the race for you. From the vineyards of Paris and sweeping coastal vistas of the Pacific Northwest to the rugged mountains of Colorado and the awe-inspiring Amalfi Coast, there is sure to be a terrain or theme for you to keep pace with. You’ve trained. You’ve set your goal. Now it’s time to take your marks, get set and go!

1. Fifth Avenue Mile: Cool autumn air and a one-mile course that stretches a straight line from the Metropolitan Museum of Art to Grand Army Plaza at the southeast corner of Central Park. Why the mile? There is no running distance that possesses more mass appeal than the mile, and we’re one of the few countries that still uses the mile as a distance measurement. This is the race for everyone from families to elite athletes to run their hearts out!

2. Mayor’s Cup Cross Country Race: This is the original mud run. If you enjoy the open air and natural surfaces of fields and trails, this is the race for you. The Mayor’s Cup began in 1990 and has grown to become one of the premier cross country meets on the East Coast. Cross Country is a team sport, so round up at least five trail-blazing friends to cross the finish line at the Mayor’s Cup XC Race.

3. The Color Run 5K: Claiming to be the happiest 5K on the planet, The Color Run is your chance to get colorfully dirty as you make your way to the finish line. Racers are instructed to arrive in white but are expected to cross the finish line in a rainbow of colors. You can run this race almost anywhere. It takes place in 170 cities spanning over 30 countries.

4. Bad Prom Run 5K: Yeah, you know that hideous bridesmaid dress hanging out in the back of your closet? Well, here is your chance to wear it again. Bring a date, a group of friends or go stag. No matter how you arrive, there is sure to be fun at every mile. Don’t miss out on the ultimate dance party after the finish. It’s the perfect place to don your glow accessories from your Bad Prom Run swag bag. This run takes place in ten US cities with more being added all the time.

5. Bay to Breakers 12K: Started as a way to lift the city’s spirits after the disastrous 1906 San Francisco earthquake, Bay to Breakers is the oldest consecutive footrace in the world. Come and be a part of this great spectacle that has become interwoven into the culture and spirit of the city. Some runners come to race, while most come to party. You’ll find that large numbers of spectators walk the route behind the runners, dressed in elaborate costumes bringing a party-like atmosphere to the event. Other oddities include a tortilla toss, where crowds of runners waiting to cross the starting line pass the time by throwing tortillas at one another, and every year some runners dress as salmons and run “upstream” from the breakers to the bay.

6. City2Surf 14K: Heading to the Land Down Under, we find a race that was inspired by a newspaper clipping about Bay to Breakers sent to The Sun newspaper by a US correspondent. From that newspaper clipping, Australia’s premier road race was born. In fact, it just so happens to be the world’s largest run with over 80,000 registered participants each year. (Think: The London and New York Marathons combined!) This 14K road race winds from Hyde Park in Sydney’s business district up to the Heads, cliffs overlooking the harbor and finishes on Bondi Beach. (photo via The Herald)

7. Hot Chocolate 15K/5K: Perhaps, the sweetest race you’ll run all year, the Hot Chocolate run totally delivers in the chocolate department. Get your chocolate road race fix from Atlanta to St. Louis and everywhere in between. America’s sweetest race offers toasty fun and serious swag. Zip yourself up in a cozy (and stylish) Hot Chocolate hoodie, and get ready for the chocolate to really begin to flow once you cross the finish line, where you’ll find a post-race party filled with music and finisher’s mugs overflowing with hot chocolate, chocolate fondue and awesome dippable treats! (photo via Discover SD)

8. Disney Princess Half Marathon: Whether or not you want to get dressed up like a princess is entirely up to you. But running 13.1 miles through the most magical place on earth is something we think just about everyone would want to do. Along the route, you’ll come across magical course surprises, special Princess events and a fun-filled party after the event to celebrate your run. Wear your personalized bib so that your favorite Disney Princesses can cheer you on your way.

9. Lululemon SeaWheeze Half Marathon: Participate in one incredible summer weekend, filled with yoga, running and partying in Vancouver. The running portion of your journey takes you through 13.1 miles of breathtaking scenery, salty ocean air and giant smiles. After you finish, it’s time to party at the Sunset Festival, dubbed a post-race glow filled with a giant yoga class, a well-deserved cold one and local food to refuel and recover all while partying under the electromagnetic summer sky to an incredible concert! (photo via Passions-Performances)

10. Le Marathon du Medoc: Love wine? Get to the starting line of Marathon du Medoc. Expect a warm welcome, lots of wine and an unforgettable race that stretches through the vineyards, chateaus and small towns of Pauillac, France. If you’ve never had wine during a marathon, here is your chance. Along your journey, you’ll receive wine (lots of wine), live music, good food and freshly shucked oysters around mile 23. Once you cross the finish, you’ll be handsomely rewarded with a tee-shirt, medal, sports bag, bottle of Medoc wine, surprise gifts, art print and refreshments as well as acrobatic entertainment and music.

11. Maratona Coast to Coast: This is definitely a bucket list race. Rarely is there a chance to run in one of the most unique and beautiful places in the world. Twist your way along the breathtaking coast from Sorrento to Amalfi, soak in the warm salty breezes, the scent of fresh lemons and cheers of encouraging spectators. Oh and get this, you can experience the beauty of Italy for free, as your enrollment fee will be paid if you can finish the marathon in six hours. (photo via Atletica Leggera)

12. Polar Circle Marathon: This is literally the coolest race on earth. If you’re ready for an arctic race (and we mean running on a vast sheet of ice for reals), then get yourself to Kangerlussuaq, Greenland. Experience the polar landscape of the tundra complete with glaciers, moraine landscapes and the soundless arctic vastness. This year you can get really “cool” as the half marathon and marathon will be held on separate days, giving you the opportunity to run them both and complete the Polar Bear Challenge.

13. Quebec City Staircase Super Challenge: If you’re vertically inclined and have a passport, climb your way from the Lower and Upper town of Quebec City in this 19k super challenge with 3,000 stairs to climb. The real challenge comes in with a race against the clock and the final staircase on the course. All 398 steps are known as Cap-Blanc, and participants are invited to compete for the title f Best Climber. Once at the top, the challenge for Best Sprinter takes off on a 1.5K sprint where the running speed of each participant is measured. (photo via Quebec Region)

14. Empire State Building Run-Up: Defy gravity and give those lungs a real workout while you ascend 1,576 steps to the top of the iconic Empire State Building. Spirits are sky high as finishers celebrate their quarter-mile ascent on the observation deck overlooking a miniature Manhattan down below. If you didn’t have buns of steel before you started the race, you will after.

15. Comrades Marathon: Known as the ultimate human race, the 56.1 mile course is relentless yet picturesque as you make your way throughout the landscape of the KwaZulu-Natal Province of South Africa. The Comrades is the world’s largest and oldest ultramarathon race, capped at 18,000 ultra-runners from over 60 countries with a goal to complete the race within the allowed 11-12 hour mark. First held in 1921, The Comrades is the brainchild of World War I veteran Vic Clapham to commemorate the South African soldiers killed during the war. He wanted a memorial that embodied camaraderie, selflessness, dedication, perseverance and to “celebrate mankind’s spirit over adversity.”

16. The North Face Ultra-Trail Du Mont-Blanc (UTMB): This is the race of a lifetime, where one has to prove they are capable before their toes can touch the starting line. Stretching 105 miles, the ultra-course crosses seven valleys, 71 glaciers, and 400 summits, and passes through three countries: France, Switzerland and Italy. Gaining upwards of 9,600 meters in elevation, 2,300 runners are allotted a maximum finish time of 46 hours. When you do get to the finish, you’ll have lived through an extraordinary adventure. (photo via North Face Journal)

17. Hood to Coast Relay: Grab 12 of your craziest friends and jump in a van to take on the challenge of Hood to Coast, an annual, overnight, long-distance relay race that runs 200 miles from Timberline Lodge at the peak of Mount Hood, through Portland and over the Oregon Coast Range to the beach town of Seaside along the Oregon coast, hence the name, Hood to Coast. Plan ahead, because this relay race has filled to capacity 22 years straight. (photo via Every Trail)

18. Ragnar Relay: “Run. Drive. Sleep? Repeat.” This is the motto of Ragnar Relays. Many describe the relays as “a party on wheels, a road trip without deodorant and a life changing movement.” If this sounds like fun to you, round up 11 awesome friends and a van, and tag team run the 200ish miles, day and night, relay-style to the finish. You can Ragnar across the USA, because there are events in beautiful locales all across this great continent.

Fill us in on the coolest races you’ve crossed the finish line on in the comments below.

Michelle Swift
Michelle Swift is a freelance writer and blogs on michelleswift.com. She has an affinity for running, culinary eats, travel and sparkly gold things. People and adventure light her up like a hot pink neon sign!
Health
More From Health