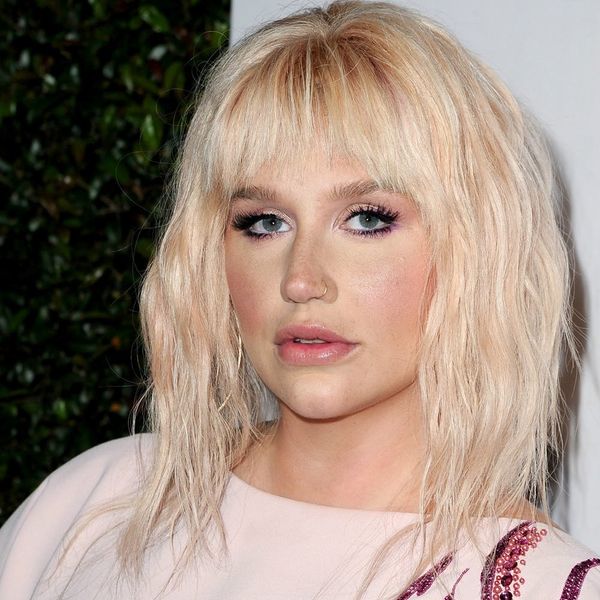 Kesha WILL be performing at tonight’s Billboard Music Awards (ABC/8 pm EST) (check out last year’s epic celeb grams here), but those who have been following her personal journey over the past several years know that it hasn’t been an easy road to the stage for our favorite free spirit.

nervous and excited for tomorrow eeeeeeeeeeee

For those who need a refresher, Kesha met Dr. Luke back in 2005 when she was just 18. The two have since had a longstanding working relationship — as a music producer for Sony under his own subsidiary label, Kemosabe Records, it was Luke who produced both of Kesha’s hit albums, Animal and Warrior, as well as her single Timber with Pitbull.

But in 2014, following a stint in rehab for an eating disorder, Kesha filed a lawsuit against the producer seeking to end their six-album contract on the grounds of emotional, mental and even physical abuse. Her suit alleged that in addition to self-esteem damaging practices such as name-calling and control tactics, Dr. Luke went so far as to force the singer to ingest illegal drugs before giving her “sober pills” (a substance Kesha says turned out to be the date rape drug). Following the incident, she claims to have woken up the next morning in Dr. Luke’s bed, naked, sick and sore: some heavy allegations, to be sure.

Though the episode was not officially reported to authorities and a 2011 deposition was leaked which showed the pop star denying rape and roofie allegations, Kesha’s 2014 suit said that “Dr. Luke threatened to destroy her career and family if she told anyone,” and sought to release her from all ties — professionally and personally — with Gottwald.

A court decision was reached back in February, when a New York Supreme Court justice dismissed the case, citing “a lack of facts” and a “heavily negotiated contract” as grounds for her ruling. She reasoned that since Sony and Dr. Luke had agreed to let the pop star work with other producers under their label, “she was being given the opportunity to record”— albeit to the monetary benefit of her would-be accuser.

Though the court did not rule in her favor, Kesha DID receive a a flood of support from both fans, who stormed Sony headquarters in outrage and created social media hashtags for the cause, as well as famous friends such as Taylor Swift, Adele, Kelly Clarkson and Lady Gaga.

Adding insult to injury, Kesha took to social media in early April to say that she had been offered reprieve of her contract by Sony — IF, and only if, she was willing to retract her statements and publically apologize for them. Kesha chose to live her truth, refusing to comply with the label’s demands, and just three days later, her motion of appeal in the case was dismissed, citing a statute of limitations and lack of jurisdiction as reasons behind the decision.

While she’s certainly been through the ringer, Kesha has not taken the rulings lying down. Recently, the singer has made many positive strides, both personally and professionally, performing with Zedd at Coachella, recording new music (with the permission of Kemosabe) and taking her life back on her own terms.

Those terms included a decision to perform live at tonight’s music awards with the consent of her record label. Yet when reports were leaked that she planned to use the performance to address her legal battle with the producer, Kemosabe quickly rescinded that approval, sparking this response from Kesha herself.

I was very excited to perform a tribute to Bob Dylan by singing a cover of "It ain't me, babe" at the Billboard awards this year. I'm very sad and sorry to say I won't be allowed to do this. I just wanted to make very clear that this performance was about me honoring one of my favorite songwriters of all time and has never had anything at all to do with Dr. Luke. I was never going to use a picture of him, speak of him or allude to my legal situation in any way. I simply wanted to sing a song I love to honor an artist I have always looked up to. thank u all for the continued support.

“I was very excited to perform a tribute to Bob Dylan by singing a cover of ‘It Ain’t Me, Babe,’ at the Billboard Music Awards this year. I’m very sad and sorry to say I won’t be allowed to do this. I just wanted to make very clear that this performance was about me honoring one of my favorite songwriters of all time and has never had anything at all to do with Dr. Luke. I was never going to use a picture of him, speak of him or allude to my legal situation in any way. I simply wanted to sing a song I love to honor an artist I have always looked up to. Thank you for all the continued support.”

Lady Gaga, for one, was quick to jump to Kesha’s aid, comparing Dr. Luke to famous Disney villain Ursula, who stole Ariel’s voice for her own vindictive purposes.

Isn't it strange that it's legal to own a woman this way? Listen Ursula, we want her voice back. #freeKesha https://t.co/rifG9nWRWw

Ben Folds also supported the singer, allowing her to take the stage to perform the planned tribute live.

Miraculously, a change of heart on Gottwald’s part quickly ensued, with Kesha confirming the news via Instagram that she would, in fact, be allowed to perform.

“Good work animals,” she wrote. “Looks like our voices can be heard after all.”

We, for one, will certainly be watching right alongside Kesha’s many supporters as she takes her freedom back on tonight’s stage — a moment that is sure to be nothing short of epically powerful.

Will you watch Kesha’s performance tonight? Let us know over @BritandCo!

Nicole Briese
Nicole is the weekend editor for Brit + Co who loves bringing you all the latest buzz. When she's not busy typing away into the wee hours, you can usually find her canoodling with her fur babies, rooting around in a bookstore, or rocking out at a concert of some sort (Guns N' Roses forever!). Check out all her latest musings and past work at nicolebjean.com.
Music
Music
Music