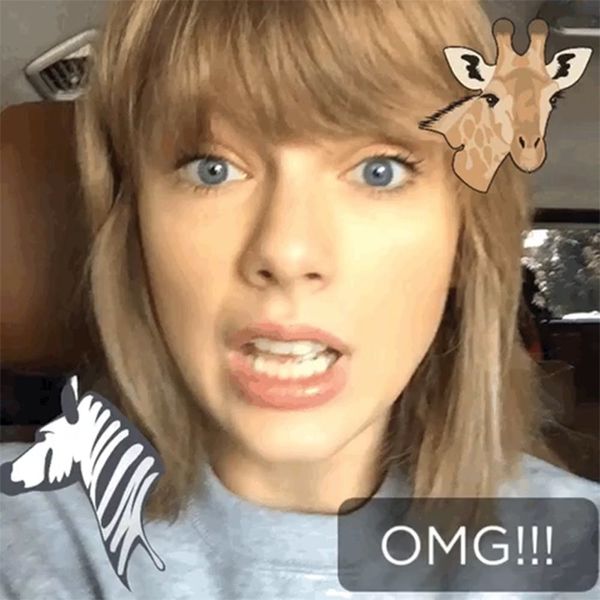 A LOT happened at last night's VMAs. Stars showed up in looks that ranged from WOW to OMG to WTF. Fake feuds were squashed while new ones were ignited (#TeamNicki forever and always) between a handful of performances and acceptance speeches.

Leading up to Taylor Swift’s VMAs appearance and the “Wildest Dreams” video premiere, the singer shared a photographic tweet with animal stickers and text that made us go, “What app is that woman?! We want in on the GIF making too!”

Throughout the night, the leader of the “Bad Blood” squad (+ Pharrell/Big Sean) sent out more GIF tweets with amazing stickers and text overlay. None of them giving promo to where they were produced, however. Celebs, they AREN’T just like us

The mystery started to unravel when Twitter’s Director of Entertainment Talent Lara Cohen sent out a series of tweets regarding Tay + co.’s sticker and text overlayed updates (ex. A, B, C, D). But the most important one was when she wrote, “OMG @taylorswift13 with these new photo tools.” WHAT NEW PHOTO TOOLS, LARA?! WE DON’T SEE THEM! The people (namely us) need to know!!

Heading to the #vma up for a couple, pray for me!pic.twitter.com/7rGiblteH9

While it became clear thanks to Lara’s shoutout that Twitter MUST be working on new photo editing tools that some VMA attendees got to play with (and make us mega jealous) pre-release last night, no other info about these GIF, sticker, text photos has been released yet. But you better believe we will be keeping an eye on the App Store (and Lara’s Twitter feed) for an update that unleashes these new tools. There’s only so many landscape and portrait Instagram shots we can upload before we need a new feature to play with.

Would you use this new Twitter feed immediately? Let us know in the comments.