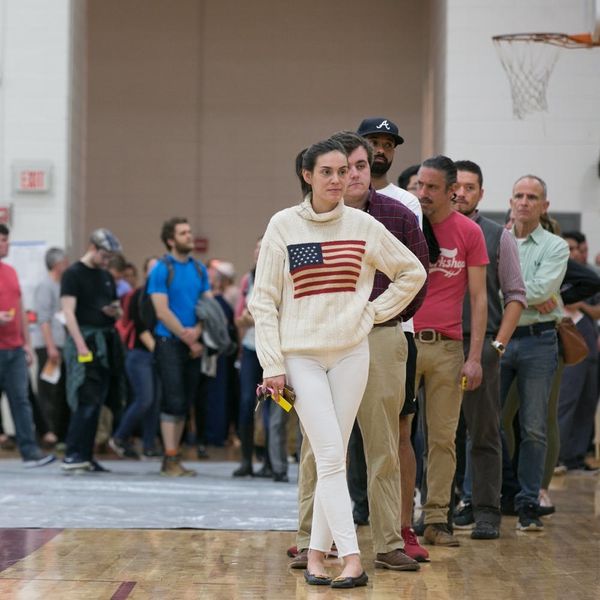 The day that liberals and progressives have been eagerly awaiting for two years is here at last: midterm election day. Though polls officially opened for election day this morning, early voting has been ongoing for weeks in many states, indicating a much higher than usual turnout for midterm elections. The stakes are high for Democrats, who are seeking to jostle at least one chamber of Congress away from Republican control, and for Republicans, who are hoping to maintain their power on the Hill.

Republicans and Democrats have been urging their supporters to vote. The right is campaigning on promises to stick with President Trump’s agenda, while Democrats are banking on resistance to Trump to turn their voters out. In any case, all the calls to take this election seriously seem to have worked. A whopping 36 million people voted early for this round of elections, in which every member of the House of Representatives and some members of the Senate are on the ballot, in addition to various gubernatorial and other state and local elections. Compare that to the 2014 midterms, when 20,536,459 people voted early, according to the University of Florida’s United States Election Project.

Even as early voter turnout has been unusually high, and observers predict the same high turnout for Election Day, right-wing voter suppression efforts remain a significant concern for Democrats. Allegations of voter suppression have been particularly prominent in Georgia’s gubernatorial race between Georgia Secretary of State Brian Kemp, a Republican, and Democrat Stacy Abrams. If Abrams wins the race, she will be the first Black woman to win a gubernatorial race in the history of the United States.

The Kemp-Abrams race has attracted national attention not only for the potentially historic win Abrams’ supporters hope she’ll see tonight, but also because of racist robocalls about Abrams (which Kemp condemned) and claims that the Kemp campaign employed voter suppression tactics. In his current capacity as Secretary of State, Kemp is holding approximately 50,000 voter registration applications, many of them for Black voters.

NBC News has confirmed that the issue at Anderson Livsey Elementary in Snellville, GA was indeed a lack of power cords. Gwinnett County Director of Communications Joe Sorenson tells @NBCNews “the machine was not supplied power and was running on battery & the battery ran out” 🤔 https://t.co/YFa45nihXs

Today, Georgia voters are reporting major issues at polling places. At Anderson Livsey Elementary School, the polling place for Snellville, Georgia, voters, there were not even cords to plug in the electronic voting machines. NBC confirmed the reports about a lack of power for the machines, and numerous outlets have pointed out that Snellville is a primarily African American community — a point of note, given the correlation between race and purged voter registrations in the state.

Paper ballots should be available as a backup to electronic voting machines, but not having access to machines could cause delays for voters. Voters in the greater Atlanta area have had to wait in line for several hours before they were able to cast a ballot, according to other news reports.

Ready to wait? Hundreds of voters stand in line for hours this morning at this SW Atlanta polling place. Only three voting machines! What’s going on here? Live report at noon. pic.twitter.com/lewTPUZnf1

Voter suppression is also expected to negatively impact Native American voters in North Dakota. In September, a federal judge upheld a regressive North Dakota voter ID law that requires a photo ID with a street address in order to vote. The law creates new obstacles for Indigenous people who live on tribal reservations, where it is not always customary to have a street address. Indigenous voters in North Dakota have been updating their IDs in droves ahead of today’s elections, but voting and Indigenous rights groups are concerned that the law will make it even more challenging if not impossible for many rural tribal members to vote.

So while overall numbers of voters are expected to be higher compared to other midterm elections, some communities are facing significant obstacles if they want to cast a vote, disproportionately impacting turnout for Democratic candidates. Political observers predict that the Democrats could see gains in the House of Representatives, but Republicans are likely to keep a majority in the Senate. There are still several hours before we find out who the winners will be, but it’s clear voters are energized to hit the polls, even if local governments may be making it harder for them to do so.

Elizabeth King
Elizabeth King is a politics, history, and culture writer based in the Twin Cities. She is generally pretty cranky but still enjoys traveling, music from the early 2000's, and plotting the resistance. Feel free to say hi on Twitter at @ekingc or check out some of her work at www.elizabethcking.com.
Election Day
Politics
Election Day Politics
More From Politics