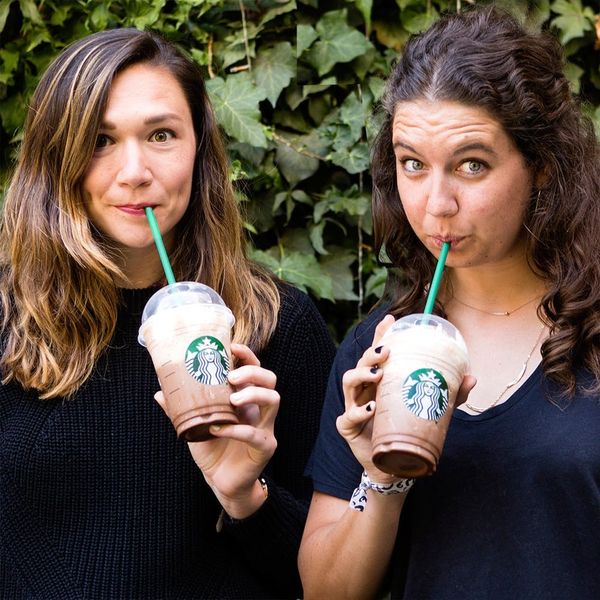 Another day, another new Starbucks menu we need to try. Earlier today the coffee chain announced the Double Double Fudge Bar Frappuccino, a “double dose of mocha sauce, vanilla syrup.” The drink blends these ingredients with Frappuccino Roast coffee and ice. Naturally, it’s all topped with a heavy dollop of whipped cream. Is it worth the sugar rush? My coworker Victoria and I headed to a nearby Starbucks to try the drink firsthand.

As I mentioned before when I attempted to order the secret “pink drink,” I felt a little bit ashamed ordering such a frilly beverage. I’m typically an “iced coffee with a little room” sort of order. And considering I used to be a barista who hated everyone that ordered blended drinks, I could tell I was killing them a little inside. But I did it anyway all for the sake of investigative journalism.

When I asked the barista (we’ll call him Joe) for a “Double Double Fudge Bar Frappuccino,” I could feel him secretly roll his eyes at me but he scribbled down my name and I went to wait for my order. But when it came out the other barista called out two mocha fraps. Oh no! I told him what I ordered and it looks like the drink was too new even for Joe to fully understand.

Barista number two made the drinks again and I brought them back to Vic for some very serious taste testing. But when I returned and compared it to the Double Double Fudge Bar Frap Starbucks posted on their Twitter, it looks like there had been another mistake. They didn’t give me chocolate whipped cream?! I won’t say exactly which Starbucks I went to, but I think it’s safe to say you might want to wait a week or so to place your order so the baristas have some time to practice.

Anyway, Victoria (who is a self-professed sugar addict BTW) and I decided to go in on the blended drinks even without the fancy whipped cream. Victoria’s thoughts? “This taste fantastic! It’s like a milkshake or like a chocolate popsicle. Like those ice cream bars you eat in the summer. There’s no coffee in this, there can’t be. It’s too good.” It should be noted that she was talking very fast and the sugar seemed to have gone straight to her head.

My review? Slightly less enthusiastic but overall, it was better than I expected. The taste Starbucks compares it to (a classic fudge bar) is actually spot on. If you took the classic summer treat off the stick and blended it for a few seconds it would 100 percent taste just like this. Would the chocolate whipped cream have made me an official fan? Looks like we’ll never know. Or well, at least until I order it again…

Cortney Clift
Cortney is the senior writer and special projects editor at Brit + Co. She typically covers topics related to women's issues, politics, and lifestyle. When she's not buried behind her computer you'll find her exploring New York City or planning her next big adventure.
Starbucks
Entertainment
Starbucks
More From Entertainment