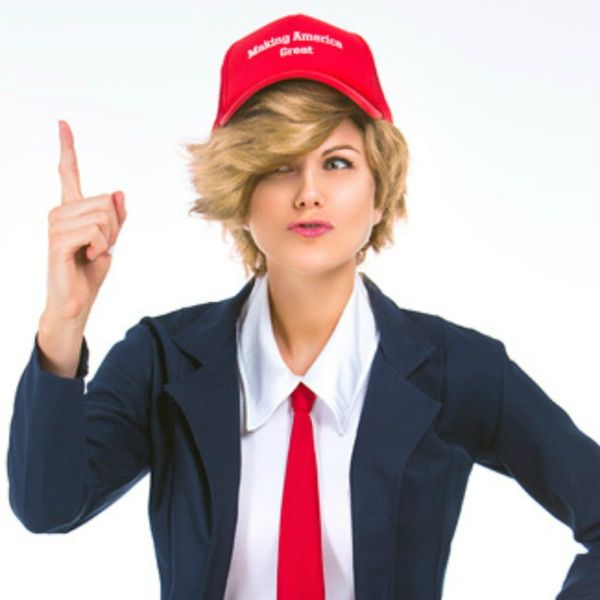 When it comes to choosing a Halloween costume, the options are kind of endless. You could use it as an opportunity to show off your humorous side, but there’s also the more traditional route, should you desire to get in touch with your inner creep (zombie apocalypse, anyone?). Or, maybe you want to be uber-cute and get a matching costume with your significant other instead — we happen to be partial to Mickey and Minnie.

1. ForPlay Money Bunny Sexy Rabbit Costume ($68): We can’t hate on a good bunny suit (how can you, when even Elle Woods approves?), but this one just has us scratching our heads. Other than the fact that bunny rhymes with money, what exactly does a rabbit have to do with Benjamins?

2. Yandy Sexy Blue Babe Costume ($30): We THINK this is supposed to be a sexy Smurfette, but that hat just doesn’t really translate all that well IRL, does it? She sortttt of looks like a chef who got a little bit too close to the oven and began to melt instead. Womp, womp.

3. Yandy Sexy Corn ($60): While we usually prefer our costumes to be a tad bit more creative, we can (usually) at least see the logic behind, oh, say, a sexy superhero (kinndddd of inevitable this year, thanks to Margot Robbie). But sexy corn? SEXY CORN? What? Why? Who? Just… no.

5. Halloweencostumes.co.uk Spoon Costume ($45): As far as execution goes, this is fine, really, but we’ve gotta’ say — we’re a little bit baffled about who in the world out there is actually compelled to be… a spoon.

6. Walmart Tetris Tetrimino ($50): Well this just seems… difficult to maneuver. Forget trying to go the bathroom — how does one get through a doorway in this?

9. J.Valentine DJ Spinwheel Hamster Costume ($200): This one admittedly went over our heads for a minute there — uh, a sexy rodent with… a boombox? But even though it makes a lot more sense with a frame of reference (this is apparently meant to be a Kia hamster girl), a Halloween costume works best if it’s largely (and immediately) recognizable, no?

11. Yandy Miss Almost Won ($56): We just find this to be in poor taste. There’s a difference between dressing up as a killer moment in pop culture (yaaaassss, Taylor Swift’s Bad Blood group!) and dressing up in a costume that essentially mocks someone’s dreams being crushed.

11. Roma Costume Office Affair Mini Dress ($40): Annnnddd again with the poor taste. Billed as an “office affair,” the concept for this one is not only totally icky — it’s insulting to actual businesswomen.

13. Walmart Bun in Oven ($25): Is it just us, or does the “bun” in this oven resemble more of a rotisserie chicken (or a fortune cookie, to be fair) than any type of actual ‘bun?’

14. Yandy Donna T. Rumpshaker Costume ($70): Last but certainly not least, we give you… sexy Donald Trump. And with that, we’re speechless. What a time to be alive!

Which of these costumes do you think is the worst? Tell us over @BritandCo!

Nicole Briese
Nicole is the weekend editor for Brit + Co who loves bringing you all the latest buzz. When she's not busy typing away into the wee hours, you can usually find her canoodling with her fur babies, rooting around in a bookstore, or rocking out at a concert of some sort (Guns N' Roses forever!). Check out all her latest musings and past work at nicolebjean.com.
Halloween
Pop Culture
Halloween
More From Pop Culture