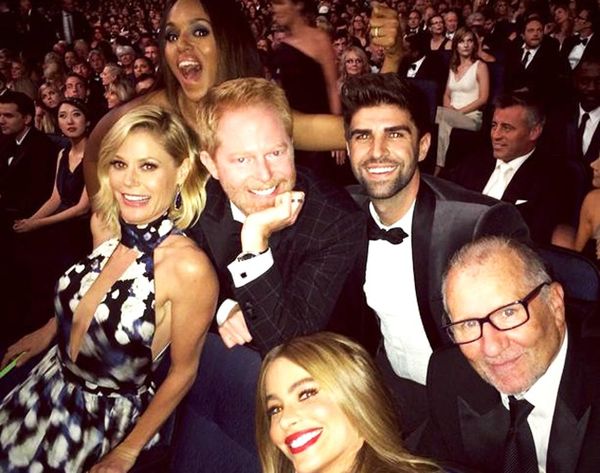 Emmys night brings out the best of the best in TV. We get to see our favorite stars all glammed-up while we’re sitting on the couch at home crossing our fingers for our faves. Well, all the binge watching paid off if you’re a Breaking Bad or Modern Family fan. But even the shows that didn’t walk away with awards are all winners in our book. Here are some of our favorite pics from the night.

1. The Ladies of Orange Is the New Black + Teyonah Parris: Orange didn’t walk away with any awards at last night’s Emmys, but they (and Mad Men star Teyonah!) won our hearts with those dresses. They’re celebrating the final bits of summer with radiant bright colors that we can’t get enough of. (via @daniebb3)

2. Kiernan Shipka: She’s turning into a serious fashion icon by the second. Growing up on a hit show can’t be easy, but this young lady has proved time and time again to be fearless when it comes to fashion in looks that definitely warrant a double take. The cut of this dress is so unique and the lavender mauve shade is perfect. (via @bridgetbrager)

4. Taylor Schilling: By now, we’re pretty used to seeing Piper out of her prison clothes, but some how she still blows us away every time. This monochrome look was subdued and ornate at the same time. Total showstopper. (via @essiepolish)

5. Kristen Wiig: Can you say “white hot?” Ms. Wiig is really working this simple, sexy silhouette and topping it off with a messy bob. Oh-so funny and oh-so lovely. (via @erinwalshnyc)

6. Zooey Deschanel: Take Zooey’s lead and do not fear a floor length fluorescent. She opted for a softer take on her blunt bangs and dark hair with a softer chestnut brown and flowing curls. No matter what you do, Zooey, you’re always #winning. (via @hellogiggles)

7. Gwen Stefani: This is a woman we’re used to seeing in curls, usually of the pin-up variety. But without her vintage do and bold wingtip eyeliner, we have to admit we had to look twice to realize who this was. That’s not to say the timeless rockstar wasn’t making it work. We’re so happy Gwen decided to shake it up with this glided, cutout, two-piece look. (via @instylela)

8. Julia Roberts: It seems we can never get enough of Julia Roberts. Everytime we see her in a movie, we feel like we’ve been missing her for so long. Don’t be a stranger, Julia! Also, killer dress. Sometimes it’s best to keep it above the knee. (via @kellyosbourne)

10. Lena Dunham and Allison Williams: Both of these ladies chose va-va-va-volume for their dresses. Which is probably why you can barely see them in this after party pic. We have to say, we can’t blame them. The bigger the better! (via @lenadunham)

11. Jessica Williams and Kristen Schaal: Daily Show correspondents, unite! Kristen Schaal is kind of a TV silent predator sneaking into all of our favorite shows. First Flight of the Concords, then The Daily Show, and most recently Bob’s Burgers as the voice of Louise <3 (via @msjwilly)

12. January Jones and Jon Hamm: Don and Betty don’t have much more on-screen time together, so we’re basking in every reminder of their existence until the final season. They’re both looking very swanky at this Emmy after party. (via @januaryjones)

13. Sarah Silverman: Licking your Emmy is probably not a gut reaction for most, but for funny lady Sarah Silverman it’s just another kind of normal. She took home the trophy for her comedy special, We are Miracles, but this win was not a miracle. We knew you had it in you, Sarah. (via @nbctv)

14. Kate Mulgrew: Well one thing’s for sure, prison garb does not do this woman justice. She looks absolutely radiant in the sheer-sleeved navy gown. We can’t wait for another season, Red. (via @oitnb)

15. Jim Parsons: Congrats on the Emmy, Jim! Another win on the books for this hilarious guy. Here he is proudly posing with his statue outside the HBO after party in Los Angeles. (via @lacmagazine)

16. Stephen Colbert: Colbert does not disappoint with his post-Emmy win face. Can’t wait ’til he joins the ranks of best late night TV hosts ever. (via @nbctv)

17. Christina Hendricks: This Hollywood beauty embraces her red locks in fire hot gown embellished with just the right amount of gold. We can’t be surprised that she hit it out of the park yet again, but we’re still absolutely crazy about this look. (via @thewallgroup)

18. Jimmy Fallon and Julia Louis-Dreyfus: The Veep herself walked away with a win for the night, while Jimmy Fallon gave an acceptance speech on behalf of Stephen Colbert… who was whispering in Fallon’s ear through the entire thing, in typical hilarious fashion. Definitely a highlight of the night. (via @nbctv)

20. Pablo Schreiber and Nick Sandow: We can’ forget the gents of Orange Is the New Black. Sure, in the series they’re pretty despicable, but off-screen, all cleaned up in a tux, they are a couple of pretty dapper dudes. (via @oitnb)

21. The Cast of Modern Family: We think Sofia Vergara snapped one of the best selfies of the night with most of the grown-ups from Modern Family before their win for Best Comedy Series. It looks like Kerry Washington snuck in a photo bomb too! (via @sofiavergara)

What was your favorite part of Emmy night? Let us know down below!

Katelan Cunningham
Katelan is a tech junkie obsessing over all things startup and design. She has entirely way too many apps on her phone and is no stranger to binge-watching. She accidentally fell in love in Los Angeles and that’s where she currently lives, writes, tweets and grams.
Party