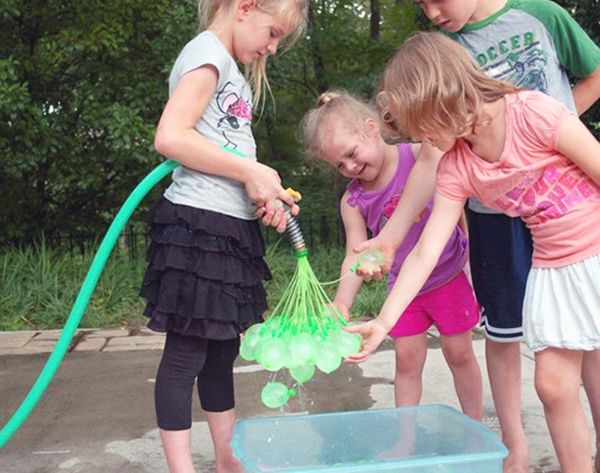 Leave it to a dad to come up with this — a product that fills AND ties not 1… not 50… but 100 water balloons in less than one minute! This product goes by the only name it should go by — Bunch O Balloons.

Thanks to serial inventor, entrepreneur and #1 Dad, Josh Malone, you no longer have to stand over the hose with a gaggle of hyper kids squealing with glee while you painstakingly fill up balloons, one by one for a water fight that will probably last five minute, tops.

Nope, now you’re going to be known as the house that has the most epic water balloons fight. And the best part about it is all you have to do is grab your lawn chair, crack open a beer and be there to keep an eye on the activities. Because with this little gadget, the kids can do all the work themselves.

37 balloons are attached together and all fill at once and even tie themselves (for all the parents who have tied countless balloons for water fights, parties and festivals, you know what a big deal this is). The tying still seems pretty mysterious and magical to us. All you have to do is give the Bunch O Ballon a little shake and blamo! They’re all tied! MAGIC!

Like any decisive dad, this creator even included a timesaving breakdown of the different methods of filling balloons with water… this is also the same sort of chart dads use to figure out the best routes for road trips and the most efficient places to stop for pee breaks. (Dad you are the most practical data scientist we’ve ever known).

This kind of logic is also what has inspired dads to make other rad products like PancakeBots, lunch bag art and LEGO creations representing all 50 states. Because, gosh darn it, dads love their kids and want them to be happy by making quirky products for them.

By now you’re dying to fund this product on Kickstarer. For a mere $15, you can get the goods to make 100 balloons. Make your pledge, start calling the neighbors for a family-challenge water ballon fight and then annihilate everyone on the block with your secret weapon of millions of balloons that you filled in just one day. Packs of 200 are ready to ship, but if you want the 20,000-packs (containing 2 MILLION BALLOONS), you’re going to have to wait until next spring. We advise waiting and then taking down the neighborhood in a blaze of watery glory balloons.

Who’s ready to fund Bunch O Balloons? Let us know in the comments below!

Lex Monson
Alexis is the co-founder of Punkpost, the app that lets you send handwritten cards (yes, handwritten by a real human) in the amount of time it takes you to send a text message. The exclusive card collections are created by a community of artists and designers and hand letter pressed on high-quality cotton paper. Get the full experience by downloading the app from the iTunes Store.
Balloons
Parenting
Balloons Kickstarter