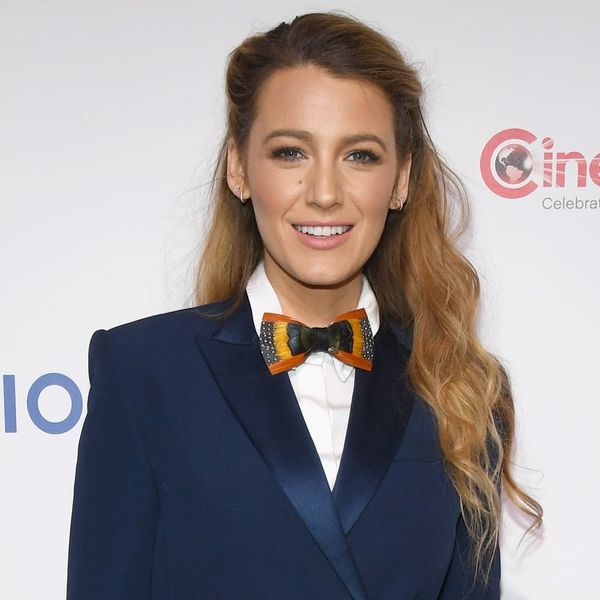 Blake Lively caused a fashion stir when she hit the red carpet at CinemaCon in Vegas in April with a rather… unexpected accessory. Rather than icing her neck with the usual bling, the Simple Favor star opted for a bow tie. Though she's far from the first celeb to borrow from the boys — Marlene Dietrich was wearing bow-tied menswear as far back as the ‘30s — she did manage to give it a fresh twist with an oversized Sonia Rykiel blazer dress. Scroll through for even more proof that a bow tie might be your go-to for glam summer nights.
Blake Lively: Lively upgraded her classic look by pairing a bright, multihued Brackish design with a navy Sonia Rykiel blazer dress. (Photo via Ethan Miller/Getty)
Janelle Monáe: Monáe, like Keaton, is no stranger to the bow tie, but the floral Dolce and Gabbana tux she wore with the menswear accent to the 2018 Grammys was feminine, masculine, everything. (Photos via Dimitrios Kambouris/Getty)
Charli XCX: The “Boys” crooner stood out from the bow tie pack at the 2015 Grammys in a white Moschino suit with a ruffled shirt and bright pink neckpiece. (Photo via Jason Merritt/Getty)
Cara Delevingne: Who says you can’t mix and match your embellishments? Certainly not Delevingne, who doubled up with a bow tie AND a statement necklace at a 2012 amfAR Milano event.
Chloë Sevigny: Sevigny, per usual, was right on trend, attending Target’s GO International Collective Launch in 2011 in Opening Ceremony’s Lesley Peter Pan collar dress. (Photo via Joe Kohen/WireImage)
Rachel McAdams: The new mom took the bow tie game up a notch with a blinged-out version to match her shirt at a 2011 The Cinema Society x Thierry Mugler screening of Midnight in Paris. (Photo via Stephen Lovekin/Getty)
Diane Kruger: Kruger was timeless in Chanel at the Australian premiere of Inglorious Bastards with added suspenders and, of course, a printed bow tie. (Photo via Lucas Dawson/Getty)
Anne Hathaway: Of the eight designer looks the Ocean’s 8 star wore to host the 2011 Oscars, we think she shone brightest in a Lanvin suit, bow tie, and sparkly heels. (Photo via Kevin Winter/Getty)
Camila Belle: Tom Ford was behind the crisp white look Belle wore to the 2011 Young Hollywood Awards, looking fierce as could be in her black bow. (Photo via Craig Barrit/Getty)
Beyoncé: The "Family Feud" singer opted for a leather Christopher Chaun piece with silver hardware to finish off her black bodysuit and ruffled waistcoat while performing for Surprise Oprah! A Farewell Spectacular in 2011. (Photo via Daniel Boczarski/Getty)
Khloé Kardashian: Kardashian made the look her own with a Lanvin rumple bow tie at an event for Redbook. (Photo via Toby Canham/Getty)
Ellie Goulding: Goulding turned to the bow tie master — Dolce & Gabbana — to outfit her for a 2011 screening of Burlesque. The result, complete with short bottoms and garter tights, was stylish and sultry. (Photo via Ian Gavan/Getty)
Rihanna: Girl was ahead of her time on the Met Gala red carpet for 2009's The Models as Muse: Embodying Fashion theme. Her bow tie topped off her Dolce & Gabbana tux with oversized sleeves, leather motorcycle gloves, and stilettos. (Photo via Chance Yeh/Patrick McMullan/Getty)
Diane Keaton: Keaton, who has been perfecting the art of androgynous dressing since her tie-laden stint as Annie Hall in 1977, showed us how it’s done on the set of Lifetime’s On Thin Ice back in 2003. (Photo via Mathew Imaging/Getty)

Which bow-tied babe is your fave? Cast your vote over @BritandCo.

Which bow-tied babe is your fave? Cast your vote over @BritandCo.

Nicole Briese
Nicole is the weekend editor for Brit + Co who loves bringing you all the latest buzz. When she's not busy typing away into the wee hours, you can usually find her canoodling with her fur babies, rooting around in a bookstore, or rocking out at a concert of some sort (Guns N' Roses forever!). Check out all her latest musings and past work at nicolebjean.com.
Accessories
Celeb Style
Accessories Blake Lively Celebrities Celebrity Style Red Carpet
More From Celeb Style