Check Out the 19 Most Delicious Foods at Governors Ball 2016 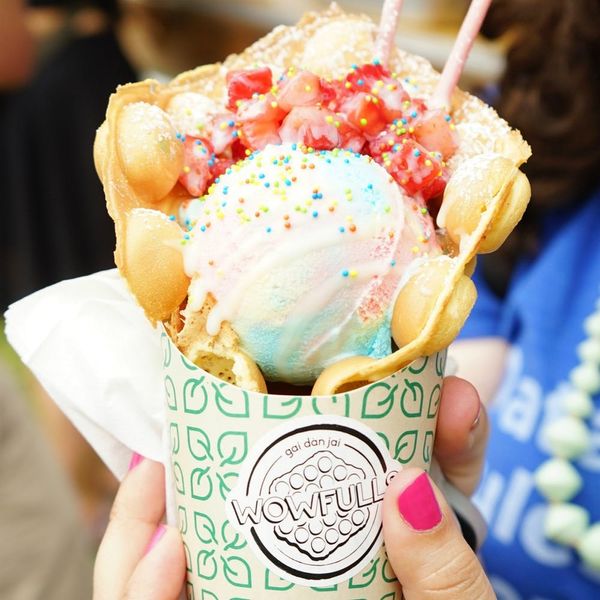 When you think about all of the things associated with music festivals, your mind probably conjures up things like bands, shows, crowds, street style… and… food? Okay, okay, grub might not be the first thing you think of, but it just might be after this post. At Governors Ball on Randall’s Island, NYC’s biggest musical festival (Kanye’s headlining Sunday!), trust us when we say that the food more or less stole the show. A whole slew of the Big Apple’s culinary heavy hitters, such as Jeepney and Momofuku, have food stands at the fest, and needless to say, it’s pretty much foodie heaven. Check out the very best of the best noms up for grabs this year.

2. Pizza Nova’s Veggie & the Full Effect: Vegetarians are in luck at Governors Ball with Pizza Nova’s Veggie & the Full Effect on hand: Topped with onions, spinach, mushrooms, tomato sauce and a generous helping of mozzarella cheese, it’s a meatless dream. It’s filling too — one of those slices is roughly the size of your face — because it’s New York City, after all!

5. Arancini Bros.’ Mix and Match Sicilian Rice Balls: Just TRY not to drool all over your screen looking at these toasty arancinis! The Sicilian Rice Balls come in Ragu, Bianco Verde, Buffalo, Bucatini Fritti, Pizza and even — gasp! — Nutella?

7. Luke’s Lobster Shrimp Roll: “Just as good as the lobster roll, but less expensive,” said the person who ordered this mouth-watering roll as we snapped a pic. The shrimp is served chilled on a buttered, toasted bun. Nom nom nom!

8. Jalapeño Corndog’s Funnel Cake: It wouldn’t be a festival without funnel cake! Sure, Jalapeño Corndog serves some delicious (and spicy!) corndog options, but their cakes are the real scene stealers. Topped with plenty of powdered sugar, this one is a thing of beauty.

9. Matchabar’s Matcha Popsicle: What with all its green tea goodness, this popsicle is the perfect way to sneak in a cold summertime treat while also getting all those great antioxidants. Sweet, healthy and delicious? Sold!

10. Asia Dog’s Mash, Sidney and Mel & Steve Topping Beef Hotdogs: Hot dogs are all about convenience. You eat them on the go: That’s what makes ’em so perfect for festival eating! The offerings at Asia Dog are no ordinary hot dogs, though. Piled high with things like pickled kimchi, crushed salt and pepper chips, these gourmet dogs are a must-try.

11. Coco & Co’s Fresh, Cold Coconut: On a summer day, nothing refreshes quite like a fresh, chilled coconut. Coco & Co is serving up some of nature’s finest refreshments at $8 a pop, emblazoned with “Gov Ball” on the side. Dry it out and it’s kind of a perfect souvenir, don’t you think?

12. Momofuku Milk Bar’s Confetti Cookie: YAAAS, COOKIES! Momofuku Milk Bar, a New York City institution, brought a truckload of their incredible cookies to Gov Ball and the crowds couldn’t be happier. In case you’re jonesing for the bakery’s other famous confections, yes, they have the iconic Crack Pie in stock too!

15. Wowfull’s “Damn, Wowfulls!”: What in the what is this gorgeous thing? This dessert is made with egg waffle (the same stuff used to make the bubble waffle cones that will be your latest summer obsession), vanilla ice cream, strawberries, Pocky sticks and subbed-in condensed milk. Not only is it amazing to eat, it’s Insta-ready too!

16. Seamore’s Tuna Poke Bowl: If you’re in the mood for something fresh and light yet filling, Seamore’s has just the thing for you. Their gorg tuna poke bowl comes with sliced avocado, crushed peanuts, sesame scallions and — oh, yeah, lots of seasoned tuna poke.

17. by CHLOE’s Classic Vegan Burger: You’re probably in for a bit of a wait should you pay a visit to this popular vegan/vegetarian eatery’s location on Bleecker Street in Manhattan: The line usually wraps around the block. That’s why we were super stoked to see the restaurant has a stand at Governors Ball! There was still a line, to be sure, but we think it’s well worth it: Just feast your eyes on this Classic Burger, made with a tempeh-lentil-chia walnut patty and topped with beet ketchup, onions and pickles on a potato bun.

19. Black Tap’s Black and White Shake: We had to save the best (and by best, we mean most Insta-worthy) for last. This craft burger and beer spot recently made a name for themselves with their insane milkshakes, and they created an exclusive one just for Gov Ball! Feast your eyes on this: the Black and White Shake, which consists of an Oreo shake topped with whipped cream, crushed cookies, chocolate syrup and a full-on Whirly Pop. SO much yes.

What do you want to eat the most? Tweet us @BritandCo!

Kimberly Wang
Kimberly Wang writes about all things pop culture, tech, style, and beauty. She's a Bay Area transplant and has an MFA in Creative Writing from Columbia University. On a sunny New York day, you can find her hanging out with her mini schnauzer Isabelle Jellybean on a blanket in Central Park.
Food Recipes Roundups
Recipes
Food Recipes Roundups
The Conversation
More From Recipes