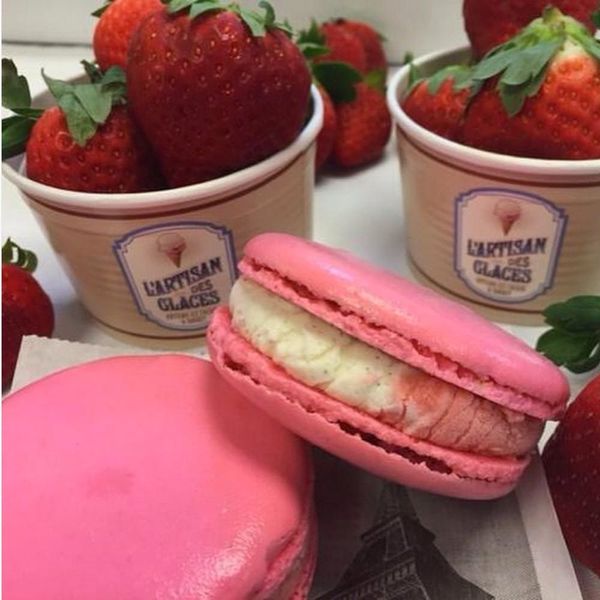 There are many things that make a trip to a Disney Park slathered in awesome sauce. There’s the ambience, the rides and all the super happy people, and don’t forget, Mickey and his bae Minnie. But there’s one other thing that makes a trip to one of these happiest places on Earth deliciously special: the food. We adore devouring Disney delights so much (and even make them at home) that we would love nothing more than to travel around the world visiting all the Disney Parks and trying all the culinary delicacies that they each offer. So what are the not-to-be-missed foods offered around the world? Here are 18 Disney dishes, from Anaheim to Shanghai, that we totally want in our bellies!

1. Castle Mooncake: At the brand spanking new Shanghai Disneyland, the imagineers spent a good deal of energy ensuring that the local culture would be prominently featured, including on the menu. One of their offerings are these totally stylish castle mooncakes (they also have Mickey Mouse mooncakes on the menu).

2. Donald Duck Tsum Tsum cupcake: Isn’t this the cutest cupcake, like, ever? Disney Parks always sell unique and wild baked goods, but this one takes the cake (yes, pun intended). It’s so perfectly round and totally embraces the global Tsum Tsum craze.

3. Teahouse lunch: This is what a lunch at the Wandering Moon Teahouse in Shanghai Disneyland looks like. Yes, YUM. It includes Fujian Seafood Noodles and Wandering Moon Shao Mai.

4. Safari skewer: There are MANY food items just begging to be eaten at the original Disneyland. They are home to many of the Disney classics like the Corn Dog and Mickey Mouse waffles, but one of their most unique (and delicious) snacks is the Safari Skewer (large asparagus spears wrapped in bacon), available at Bengal Barbecue (and at $4.19, it’s a steal).

I know it's really hard to tell, but one of these is a dessert and one is a mountain #matterhornmacaroon #yohoyohoalogstonlifeforme

6. Ratatouille: Of course the chic Bistrot Chez Rémy in the Walt Disney Studio Park at Disneyland Paris would serve Ratatouille, the signature dish of the pint-sized chef (and rodent) of Pixar fame. Bistrot Chez Rémy is amazingly themed with Champagne cork seats and oversized cocktail umbrellas that cover the tables. We want to go to there!

7. Mickey Mouse Marshmallow: This, this my friends is a “Guimauve avec nappage chocolat et copeaux de noix de coco,” or if you didn’t take French, “marshmallow with chocolate topping and coconut shavings.” It looks delish in any language!

10. Star Wars Edibles: The Crystal Lotus Restaurant doesn’t just do cute — no, they also do the Dark Side with the Star Wars Baked Yunnan Ham and Assorted Nuts Puff Pastries.

11. Mickey Deets: At the Restaurant “Hokusai” they serve up this gorgeous seafood bowl with an amazing attention to detail (look at those cute Mickeys).

12. Little Green Dumplings: These totes adorable mochis in Toy Story alien form come in a set of three (chocolate, strawberry and vanilla) and are available in Tomorrowland at Tokyo Disneyland. They’re so seriously cute, it would almost be a shame to eat them.

13. Scrumplings: If you aren’t feeling green, you can pick up the Scrump from Lilo and Stitch mochi dumplings. These also come in a set of three (sweet potato, mango and banana).

14. Mickey’s Chicken Pao: These adorable sandwiches are from Huey, Dewey and Louie’s Good Time Cafe in Toontown at Tokyo Disneyland. We see a whole bunch of foods in the shape of Mickey’s head but rarely his hands (but we LOVE these).

15. Mickey in an Egg: This rice bowl might have a bunch of elements in it, but all we care about is that egg. HOW DID THEY DO IT? Amazing.

16. Grey Stuff: It is ridiculously hard to narrow down the choices for unique food choices at Walt Disney World. You know why? Because there are over 135 restaurants there! Yes, you read that read. Over 135! One of our fave offerings though is the Grey Stuff served at Be Our Guest in the Magic Kingdom. It’s a chocolate shell, cookie crème topped with Lumiere’s special Grey Stuff.

17. Poutine: If you don’t get up to Canada very much, then odds are you don’t often have the chance to indulge in Poutine. At the aptly named Daily Poutine in Disney Springs, they serve up this mix of taters, sausage gravy and cheddar cheese curds topped with a fried egg.

18. Strawberries and Cream Macaron Ice Cream Sandwich: We love macarons and we love ice cream sandwiches, so it’s NO WONDER that we would love this French-inspired treat served up at L’Artisan des Glaces in Epcot.