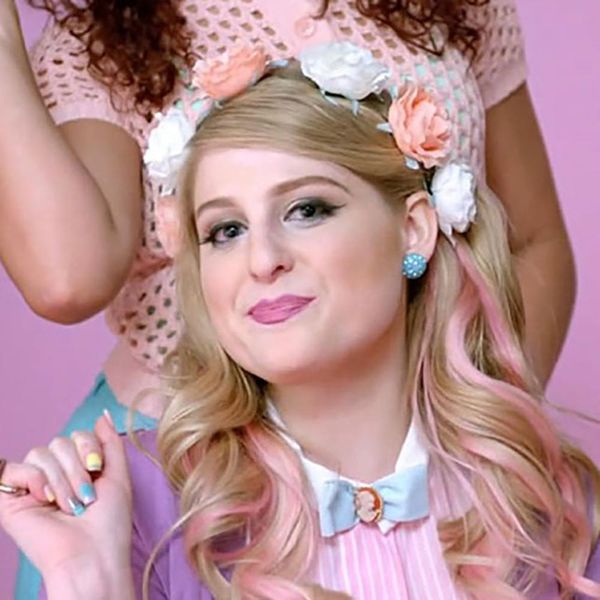 Music video addicts can attest to this: 2014 was a heck of a year. From Iggy’s Clueless tribute to Taylor’s failed attempt to shake it in every dance genre possible, our favorite music acts kept us glued to our monitors pressing “replay” on the hits. So, as you can imagine, we’re always pumped when the Grammys roll around — the award show is basically those videos come to life. Regardless if the nominees are performing or not on this Sunday’s show (#shakeitoffswifties), we’re all about cheering them on to Grammy gold by channeling our most-watched musical moments IRL (’cause what’s an award show without an award show party?). Here’s how to join in on the festivities: cast your ballots, grab your besties and get gussied up as your favorite Record of the Year nominee.

Iggy combined two of our favorite things in the video for her chart-topping single: looking fierce and quoting Clueless, and all over an insanely infectious beat.

2. LiaLane Fancy Brooch Set ($5): Show that you fancy with this hand-drawn Shrinky Dinks pin finished with holographic glitter, just one gem in a sea of adorably twee badges that range from psychedelic pizzas to trippy campaign badges (uhh, Hilary for 2016 anyone?).

3. ASOS Curve ‘90s Tattoo Choker Necklace With Faux Pearl ($8): Because it’s the most quintessential ‘90s thing besides Clueless. And it’s only $8.

Maddie Ziegler’s otherworldly dance moves are the perfect startling visuals to accompany Sia’s epic song, and their matching bobs may or may not have influenced a certain editors hair cut + color…

5. American Apparel Cotton Spandex Jersey Short Sleeved T-Shirt Leotard ($28): Channel your inner dancer with this full-coverage leotard that you could totally wear under your favorite circle skirt when you’re not high-kicking.

6. Obsessive Compulsive Cosmetics Pleasure Motel Nail Lacquer ($10): We spotted a pop of pink on Maddie’s hands in the vid. Follow suit with this springy hue.

The brooding British lad won our hearts from the second he looked into that cam. Once we heard his voice, there was no need to convince us to, well, stay.

7. DIY Pinup Hair: Sam’s shaved pompadour is a total retro throwback. Copy his style by DIYing a pair of pin up girl-inspired bumper bangs. (via RedlipsAdictedMakeup)

8. Giggolosphy Monogram Earrings ($24): Sam switches between signature cross earrings and “S” studs, though ones with your initials will do just fine.

Taylor Swift “Shake It Off”

Tay gives us so many versions of herself to dress up as (it’s the ultimate inspiration for a group costume if you’re throwing a Grammys party with fellow Swifties). But here, we’re choosing Taylor’s flawless signature look.

10. NARS Audacious Lipstick in Lana ($32): You can’t call yourself a Swiftie without bright red lips.

Meghan Trainor “All About That Bass”

Meghan’s quirky ditty helped bring booty back last year, so get to shakin’ that thang in full pastels inspired by her dollhouse-themed video.

13. DIY Unicorn Hair: Streak up your ‘do with candy colors à la Meghan with hair chalk. Dibs on pink. (via Brit + Co)

15. DKNY Opaque Control Top Tights in Force ($16): Don’t you know she’s all about those springy hues, too? Take your LWD to the next level with this pretty pair.

Who do you hope takes home a Grammy or two? Tell us in the comments below.