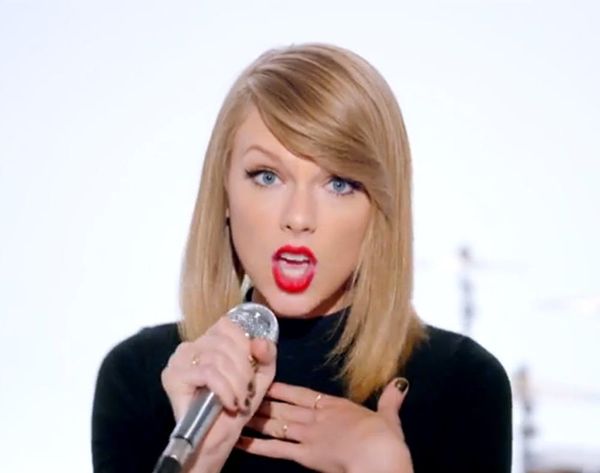 Taylor Swift has been the better half of many a pair in her days — red lipstick, John Mayer, flat sneakers, Harry Styles, homemade cookies, Kanye West. The list could go on, but today we have another plus one top of mind for TayTay: HALLOWEEN. After watching her latest video “Shake It Off” and then after watching it another 10 times, and then after learning all the dance moves and acting it out for the rest of the Brit + Co office, it hit me. There are a lot of stars you could strut into your Halloween party dressed up as, but roll up in one of Taylor’s looks and that’s INSTANT pop culture recognition right there.

Whether you’re looking to kill it as a costumed couple, want to nail the group look for you and your whole crew or are trick or treating solo, here are 10 Taylor Swift moments made for Halloween.

Shake It Off: Taylor’s latest video released just yesterday is a virtual Vevo treasure trove of ideas. Watch the video above, and then let’s talk specifics below!

1. Blonde Swan: Tay busts out the bun for her take on Black Swan. Dust off your old Natalie Portman costume and go with a group of friends as these pretty ballerinas. We would add the signature Swift red lip to tip everyone off to your updated reference.

2. Cheerleader Taylor: Get your megaphone ready — and don’t worry if you’re not the best at hand-pom coordination. All you need to work this, is a Swift spirited costume, and a nimble crew who can shake it off in sync.

3. Ribbon Dancing Taylor: A ribbon dancer (“writing on the wall!”) is an easy enough DIY, and a quick trip to American Apparel/your high school gymnastics wardrobe should hook you up with the outfit.

4. Booty Shakin’ Swift: Yes, twerking is a thing, but in Swiftville there’s no right or wrong and nary a Miley to be found — there’s just “do what feels fun” vibe to clap it to. A costume like this would be the perfect time to show off all of the Booty Shakin’ cardio classes you’ve been taking and Twerking 101 YouTube videos you’ve been watching. Plus, we’re dying to DIY/wear all that crazy jewelry.

5. B-Girl Taylor: You know you were looking for a way to incorporate your trusty dusty ol’ boombox into a costume. Well, this is it!

6. We Are Never Getting Back Together Taylor: This costume would even work for last-minute ladies who have a pair of PJs, thick frame glasses and red lipstick lying around. Oh, and a curling iron to put a lil bump in your bangs. If you want to make it into a couples costume, just ask your guy to do his best hovering Harry Styles or Jake G all night.

7. You Belong With Me Taylor: Go HAM on a white t-shirt with some Sharpies circa summer camp 1999 to rock this video look. Bonus points if you have a notepad handy, a stand-in Lucas Till and a mid-party, hot chick transformation.

8. Taylor + Her Exes: This is one of our favorite couple costumes from our very own Cecelia (you may know her as that pretty lil redhead in many of our beauty posts!) and her hubby Steve. CC went as TT and her man masqueraded as the many faces of Taylor’s love life.

This is an especially good option if there is a photo booth at the Halloween party you’re attending.

9. Kanye + Taylor: One of Taylor’s most infamous moments has been eternalized in meme form and is topical (or at least laughable) every October 31st. The deal is, though, that whoever is dressed up as Interrupting Kanye has to play the part all night. (via College Humor)

10. OG TS: Back when Tim McGraw and Drew were the only men making teardrops fall on her guitar, Taylor was a curly haired country crooner in a pretty dress and cowboy boots, no Selena Gomez BFF in site. This one works for the kids, but we won’t tell if you show up in this look, too! (via wedress + Mom, Swim, Bike, Run)

What Taylor would you be for H-ween? And, ps, it’s ALMOST SEPTEMBER — are you thinking about your Halloween costume yet? We know you are ;) share with us below!