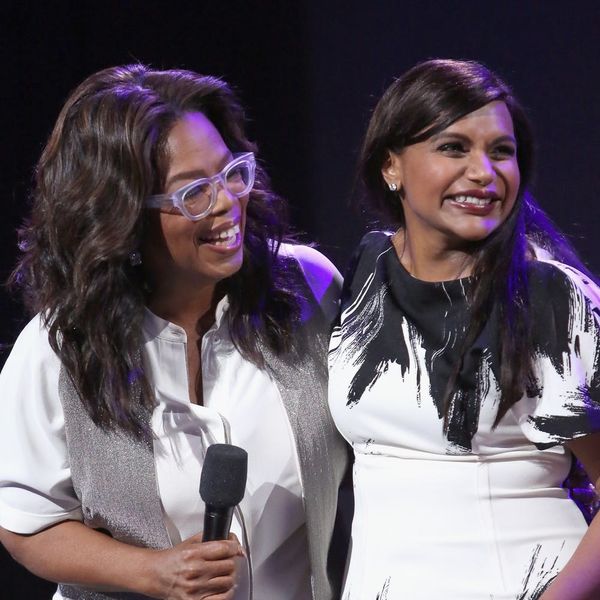 In case you’ve been living under a rock, you likely already know that anonymous sources confirmed to multiple publications earlier this month that Mindy Kaling is expecting. While Kaling has yet to publicly remark on the pregnancy herself, we HAVE now heard from the next best person: her A Wrinkle in Time co-star, Oprah Winfrey.

The talk show legend spoke to People to say that that she heard the news straight from Kaling herself during Disney’s D23 expo last week. “That’s when she told me. My mouth dropped,” the talk show legend admitted. (Ours too, girl. Ours too!)

So shocked, in fact, was the 63-year-old that she asked her younger castmate to repeat herself. “What did you just say?” she recalls of their convo, which induced a nonchalant reply from The Mindy Project star. “Oh, Oprah. I don’t think you know. I’m five months pregnant.’ And I said, ‘WHAAAAT!?’”

Though you’d never know it by the non-maternity dress she donned to debut her bump on the red carpet, that puts Kaling at a November (or early December, depending!) due date.

Winfrey also revealed that their third Mrs. W., Reese Witherspoon, found out around the same time, telling her, “I just found out too,” as did director Ava DuVerNay, who echoed Witherspoon’s sentiments.

While the Disney star didn’t give anything away with regard to the baby’s father, she did tell People that she was happy for Kaling, saying, “I’m excited for her.”

What do you think of Oprah’s big reveal? Fill us in @BritandCo.