President Trump Is Skipping Out on the White House Correspondents’ Dinner 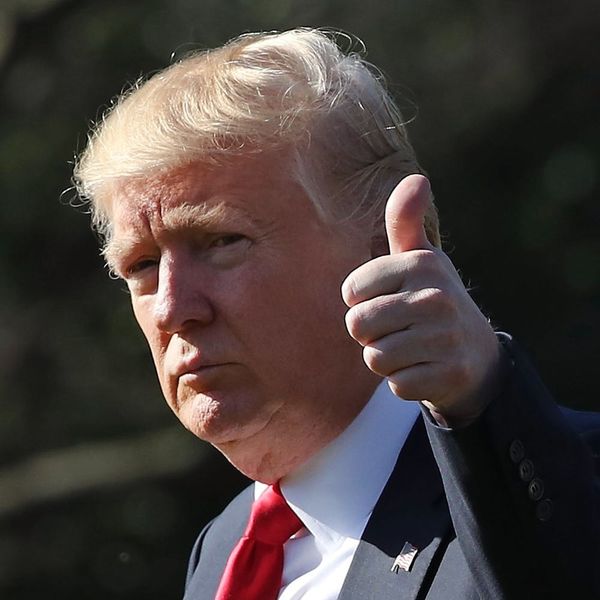 Every year since 1921, the White House Correspondents’ Association has hosted a formal dinner in an effort to bring together its journalist members and the folks they report on. It’s an event which the President of the United States traditionally attends (you might recall President Obama’s epic roasting of Kendall Jenner last year) — a practice which began in 1924 with Calvin Coolidge.

This year, however, it seems that President Trump will be bucking tradition yet again: He has officially announced (via Twitter, of course) that he will not be attending the star-studded event on April 29. The decision doesn’t come as such a huge (yuge?) shock: Trump’s ongoing feud with the media, which recently resulted in him banning certain press outlets from White House briefings, would suggest the obvious. As a White House spokesperson, Sarah Huckabee Sanders, said to This Week With George Stephanopoulos, “I think it’s… kind of naive of us to think that we can all walk into a room for a couple of hours and pretend some of that tension isn’t there.” She said instead that Trump would “spend the night focused on what he can do to better help America.”

I will not be attending the White House Correspondents' Association Dinner this year. Please wish everyone well and have a great evening!

Following POTUS’ announcement, Jeff Mason, president of the White House Correspondents’ Association, told media that the dinner “has been and will continue to be a celebration of the First Amendment and the important role played by an independent news media in a healthy republic.” He went on to say that the organization “[looks] forward to shining a spotlight at the dinner on some of the best political journalism of the past year and recognizing the promising students who represent the next generation of our profession” (the organization also awards $100,000 in scholarships to students who hope to one day become journalists themselves).

From the looks of celebrity responses via Twitter, it would appear that the association has their full support, with some even calling for Trump’s SNL doppleganger, Alec Baldwin, to take his place at the affair.

If @AlecBaldwin fills in for @realDonaldTrump at the Correspondents dinner, a bit of karmic balance might be restored to the universe.

.@AlecBaldwin time to suit up. https://t.co/DfVnzAYxSG

We, for one, are kinda bummed: This was a potential chance at mending the broken fences between two parties that desperately NEED to be mended if there’s any hope of their having a successful working relationship on behalf of the American people. Fingers crossed they find a way to do just that regardless.

What do you make of the president’s decision? Tweet us @BritandCo.

Barbara Pavone
Barbara Pavone is a pop culture-obsessed writer based in beautiful (but ridiculously cold) Montreal, Canada. When she's not working, she's sipping on a Pimm's Cup and daydreaming about her celebrity hero, Saint West.
Controversy
Politics
Controversy Politics
More From Politics