We Tried ALL of Starbucks’ Rainbow Drinks, Here’s Which One Is Best 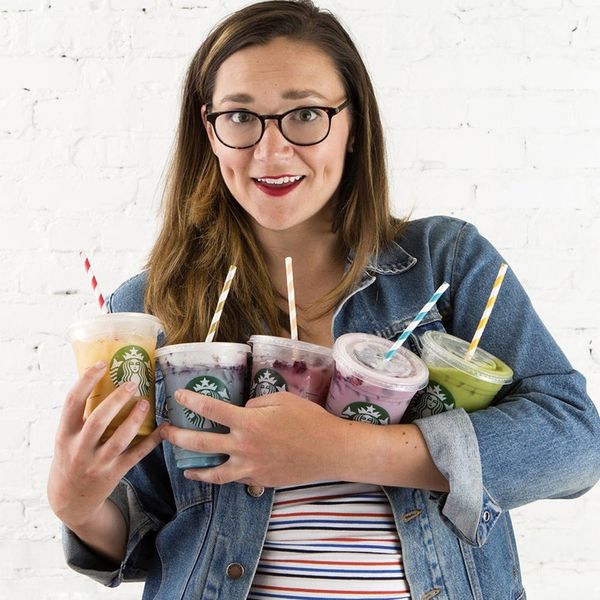 So Starbucks’ rainbow drinks are a THING now. It’s official. We’ll not like “official” in that you’ll find it on the menu, but Starbucks recently posted an Instagram photo of the drinks, explaining exactly how to order all of five them (pink, orange, green, purple and blue). These tasty treats are having a major moment on Instagram and it’s not hard to see why: They’re colorful, summery and hail from the most popular coffee chain on earth. But with five options to choose from now, how do you know which to try first? Well, each drink is kind of a hodgepodge of ingredients and doesn’t exactly taste like what you’d think so we’ve gone ahead and tried them all + did a little bit of favor profiling for you.

Pink: Tastes like an expensive bottle of strawberry milk. This one is VERY sweet! Ask for it without as much syrup if you’re into the strawberry flavor but don’t want to hit up the dentist tomorrow.

Orange: Tastes like a melted smoothie or perhaps a cheap piña colada from T.G.I. Fridays.

Green Drink: It’s matcha with black tea, so this is probably the healthiest option. It’s the least sweet by FAR.

Purple: It’s sweet but not too sweet and tastes like a blueberry muffin in liquid form (which actually sounds kind of gross, but like, trust, y’all).

Blue: Tastes like the purple drink but sweeter. This one is pretty blah TBH.

But which one is BEST?!

I’ll take a drum roll please… As a certified expert in Starbucks’ trendy rainbow drinks*, I’m going to go ahead and deem the purple drink the best. As I mentioned before, I was surprisingly into the taste of this one when I reviewed it the first time around. It’s sweet but not too sweet and tastes like one of my favorite breakfast treats – a blueberry muffin.

Now for the rest… In order of second place to last we’ve got the orange drink, green drink, pink drink and blue drink. Sorry, blue drink but you’re really just not cutting it. My coworker Angela Velez describes the blue drink as “a dessert made out of window cleaner.” Harsh, but not inaccurate, Angela.

*Okay, fine not really. That doesn’t exist… yet.

Cortney Clift
Cortney is the senior writer and special projects editor at Brit + Co. She typically covers topics related to women's issues, politics, and lifestyle. When she's not buried behind her computer you'll find her exploring New York City or planning her next big adventure.
Starbucks
Food News
Starbucks
The Conversation
Reviews:
More From Food News